Barack Obama’s public image has eroded in recent months. His overall job approval rating is now, on balance, significantly negative for the first time in his presidency, and his rating on the economy has continued to decline. Nevertheless, even as public impressions of Obama on traits related to leadership have declined significantly, Americans continue to rate the president positively on many other personal traits. And increasing numbers both blame Republican leadership for the lack of cooperation in Washington and say they would like to see Obama challenge Republican leadership. 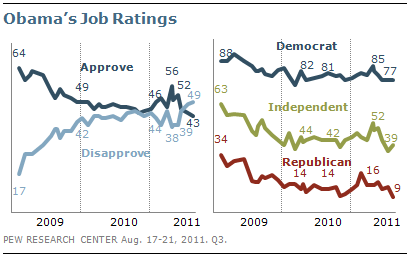 About half (49%) of Americans now disapprove of the job Obama is doing, while just 43% approve. This is little changed from last month (48% disapprove, 44% approve), but reflects a substantial drop from the period following the killing of Osama bin Laden in May.

Republican assessments of Obama—already negative—have continued to sour. Today, just 9% say they approve of the job Obama is doing, down from 15% last month. Obama’s ratings among independents and Democrats are little changed since last month. Still, just 39% of independents approve of his handling of the job, while 52% disapprove. About three-quarters of Democrats (77%) continue to approve of Obama. 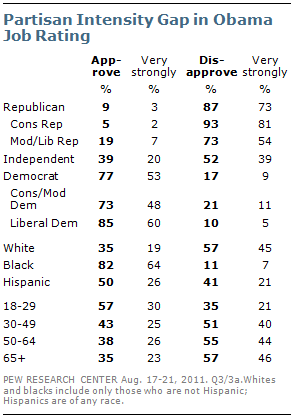 Most Continue to Approve of Obama on Terrorism

Public evaluations of Obama’s handling of the economy and the budget deficit have also grown more negative in recent months. Today, six-in-ten (60%) disapprove of his performance on each of these issues. Americans’ ratings of Obama’s handling of the threat of terrorism continue remain more positive: 56% currently approve, about the same percentage as throughout much of his presidency. Obama received a significant bump on this measure, which has since receded, the day following the announcement of the killing of Osama bin Laden. 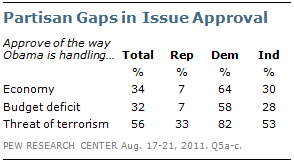 Americans continue to have positive personal impressions of Barack Obama along most dimensions. Majorities say he stands up for what he believes in (71%), cares about people like them (63%), and most view him as a good communicator (75%), well-informed (63%) and trustworthy (59%). Public assessments of these traits are relatively unchanged in recent months. 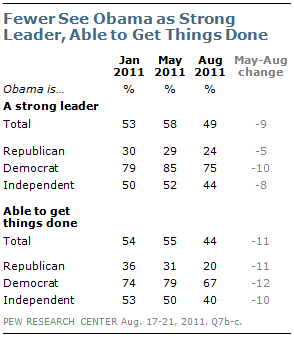 But evaluations of Obama’s leadership have dropped off in recent months. Today, the public is divided over whether Obama is a strong leader (49% strong leader, 47% not a strong leader), and more now say he is not able to get things done than say he is (50% not able, 44% able).

Views of Obama’s ability to get things done have also declined among Republicans (20% now say he can get things done, compared with 31% in May) and Democrats (67% today, 79% in May). And although three-quarters of Democrats (75%) continue to say Obama is a strong leader, this has dropped 10 points since May. Among Democrats, liberal Democrats continue to rate Obama more highly on these characteristics than do conservative and moderate Democrats. 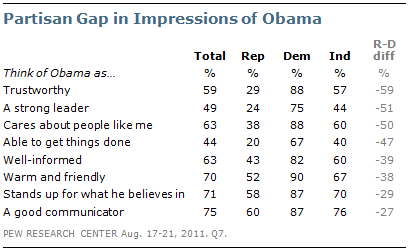 Across the board, Democrats express much more positive views of Obama’s traits and personal qualities than do Republicans. The partisan gap is particularly pronounced in opinions about whether Obama is trustworthy.

Nearly nine-in-ten Democrats (88%) and a majority of independents (57%) view Obama as trustworthy. That compares with just 29% of Republicans; 68% say Obama is not trustworthy. The partisan gaps in views of Obama’s personal traits are nearly as wide in opinions about whether Obama is a strong leader (51 points) cares about people like me (50 points) and able to get things done (47 points).

Nonetheless, Republicans have positive views of some of Obama’s traits. Majorities see Obama as a good communicator (60%), as someone who stands up for what he believes in (58%) and as warm and friendly (52%). 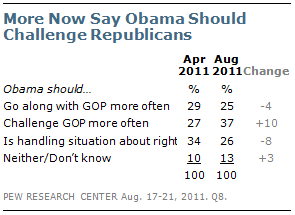 Democrats, in particular, are now more likely to say Obama should challenge Republicans in Congress more often. Today, a majority of 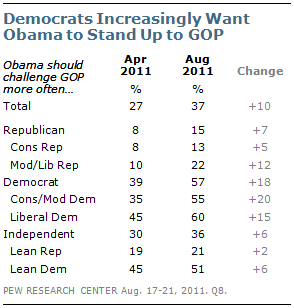 And there is little difference among Democrats on this question. Liberal Democrats and their conservative and moderate counterparts are about equally likely to want to see Obama stand up more to Republicans (60%, 55% respectively). 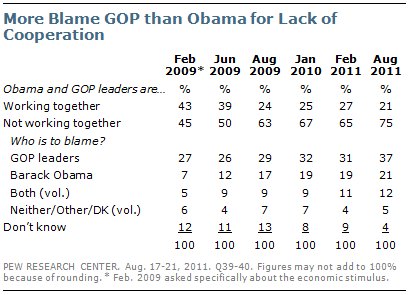 The public continues to place greater blame for the lack of cooperation on Republican leaders (37%) than on Barack Obama (21%), though about one-in-ten (12%) volunteer that both are responsible. 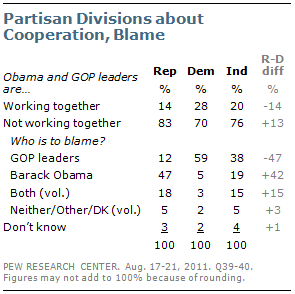 Both Republicans and Democrats are more likely to place the blame on the opposing party’s leadership than on their own. About six-in-ten Democrats (59%) blame GOP leadership, while about half of Republicans (47%) blame Obama.

Next: Section 2: The 2012 Election
← Prev Page
Page1You are reading page2Page3Page4Page5Page6Page7
Next Page →