Just a quarter of Americans (25%) say they have a favorable opinion of Congress, while 70% have an unfavorable view. This is among the lowest favorable ratings for Congress in more than two decades of Pew Research Center surveys. 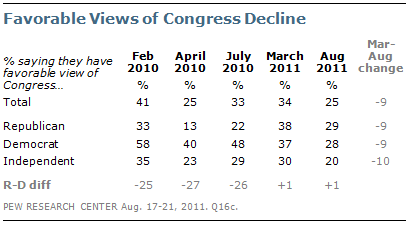 The number expressing a favorable opinion of Congress has fallen by nine points since March (from 34% to 25%), with nearly equal declines among Republicans, Democrats and independents.

The current rating is identical to April 2010 (25%), a period of highly negative views toward both the federal government and politicians. (See “Distrust, Discontent, Anger and Partisan Rancor,” April 18, 2010.)

Democrats have much less favorable opinions of Congress than they did last year, when their party controlled both the House and Senate. In July 2010, for instance, nearly half of Democrats (48%) had a favorable opinion of Congress; that compares with just 28% in the current survey.

Republicans’ views of Congress became more positive after their party won the House in last fall’s midterm. In March of this year, 38% of Republicans felt favorably toward Congress, up from 22% in July 2010. But the percentage of Republicans with favorable opinions of Congress has fallen to 29% in the new survey. 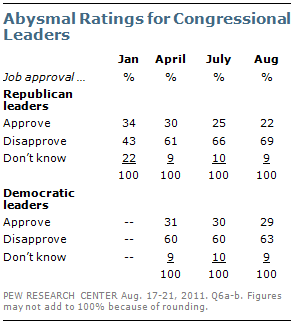 Ratings for GOP leaders have fallen sharply among the Republican base – and the change has been particularly dramatic among Republicans and Republican leaning-independents who agree with the Tea Party. Among all Republicans, 46% now approve of the job performance of Republican leaders, down 23 points from January. 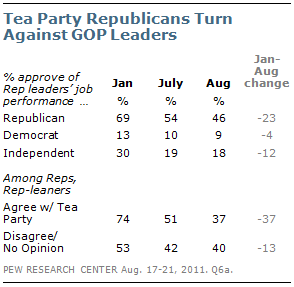 In the past month alone, following the debt ceiling agreement between President Obama and Republican leaders, the approval rating for GOP leaders has fallen by 14 points – from 51% to 37% – among Republicans and Republican leaners who agree with the Tea Party. 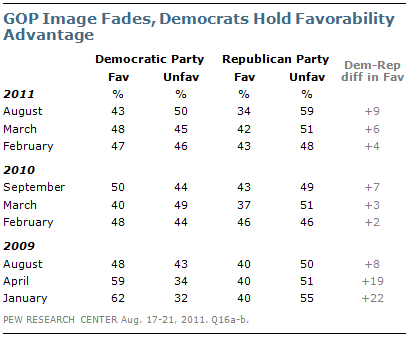 Both political parties also are viewed less favorably than they were earlier this year. But the decline in the GOP’s image has been more pronounced: Currently, 34% say they have a favorable opinion of the Republican Party while 59% view the GOP unfavorably. The percent expressing an unfavorable opinion of the Republican Party has risen by 11 points (from 48%) since February.

Still, the Democrats are more viewed more favorably than the GOP (43% to 34%). The Democrats’ advantage is far narrower than at the start of the Obama administration. In January 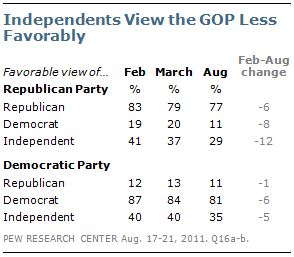 2009, 62% said they had a positive view of the Democratic Party compared with just 40% who said the same about the GOP.

Democrats More Unhappy with Their Party 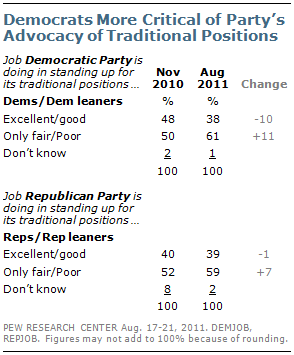 Democrats express fairly positive views of their party’s congressional leaders – 53% approve of their job performance. But Democrats are increasingly critical of the party’s advocacy of its traditional positions, such as protecting the interests of minorities, helping the poor and needy and representing working people.

Currently, just 38% of Democrats and Democratic leaders say the party is doing an excellent or good job of standing up for its traditional positions; 61% say the party has done only a fair or poor job. Last November, following the party’s dismal showing in the midterm elections, Democrats and Democratic leaners expressed more positive views of how well the party was standing up for its traditional positions (48% excellent or good/ 50% only fair or poor).

Republicans and Republican leaners currently give about the same negative evaluations as Democrats of their party’s advocacy of its traditional positions – in the GOP’s case, on such things as reducing the size of government, cutting taxes and promoting conservative social values. Only about four-in-ten Republicans (39%) give their party excellent or good marks, while 59% say it has done only a fair or poor job. That represents little change from November 2010 (40% excellent/good, 52% only fair/poor). 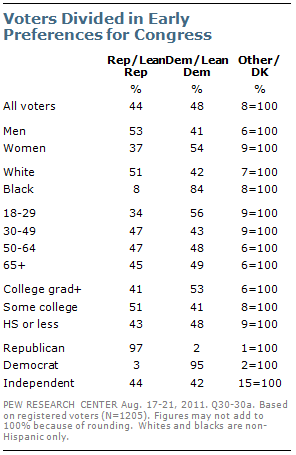 Notably, independent voters, whose support for Republicans was critical in their 2010 midterm victories, are now evenly divided: 44% favor the Republican candidate or lean Republican in their district and virtually the same percentage (42%) say they would vote for the Democrat.

Republicans and Democrats both overwhelmingly say they will vote for their party’s candidates. And while Tea Party Republicans have become more critical of GOP congressional leaders, 98% of Republican and Republican-leaning voters who agree with the Tea Party plan to vote for the Republican candidate in their district. 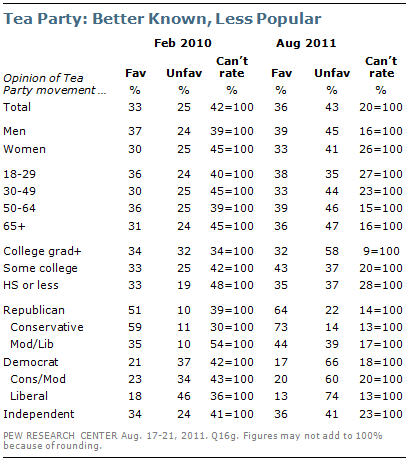 Next: Section 4: Anger and Distrust in Government
← Prev Page
Page1Page2Page3You are reading page4Page5Page6Page7
Next Page →