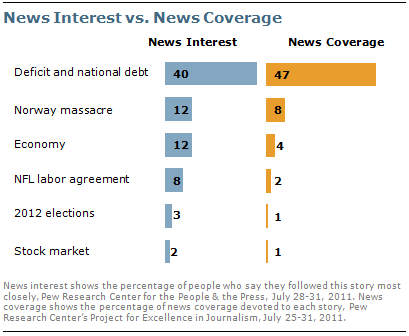 The tense negotiations in Washington over legislation to cut the federal deficit and raise the nation’s debt limit topped the public’s news interest and the media’s coverage for the third consecutive week.

Four-in-ten (40%) say they followed news about the debt debate more closely than any other news last week, while the fight’s various story lines accounted for 47% of the week’s coverage.

Looking at a different measure, 41% say they followed the debate very closely, according to the latest weekly News Interest Index conducted July 28-31 among 1,001 adults by the Pew Research Center for the People & the Press. That number rose steadily throughout July as the Aug. 2 deadline for a possible federal default approached. In early July, 25% said they were following news about the debt and deficit very closely.

The number following the story very closely last week, however, is still less than the 47% that said this about the April budget talks that narrowly averted a government shutdown. 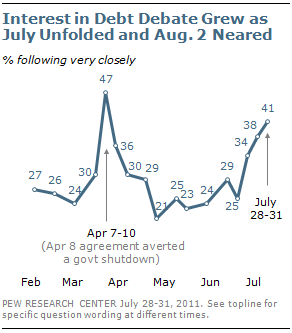 The public also expresses great frustration with the negotiations in Washington between the White House and leaders in Congress. When asked for a single word to describe their impressions of the negotiations, “ridiculous” and “disgusting” are among the most frequently offered, according to Pew Research Center/Washington Post findings released Monday.

Accounting for nearly half of the newshole analyzed by the Pew Research Center’s Project for Excellence in Journalism (PEJ), the debt debate dominated coverage last week. No other story comes close. In early April, news about the partisan budget fight that almost led to a government shutdown accounted for 29% of coverage. That was amid continuing coverage of several other major stories, including the fighting in Libya and the aftermath of the earthquake and tsunami in Japan. 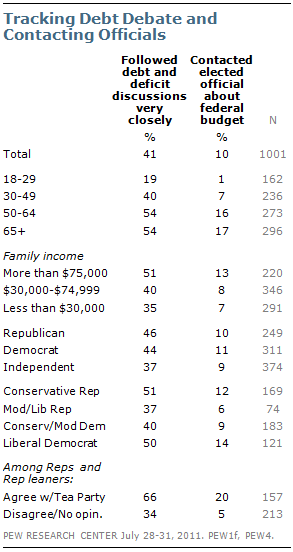 Overall, though, interest in news about the debt debate is similar among Republicans (46% very closely), Democrats (44%) and independents (37%). About one-in-ten in each says they contacted an elected official about the deficit fight in the past month.

Along with the debt debate, the public continued to closely follow news about an interrelated topic – the nation’s struggling economy. More than four-in-ten (43%) say they followed news about the economy very closely, a level similar to interest in economic news in recent weeks; 12% say this was the news they followed most closely.
More general economic news accounted for 4% of coverage, according to PEJ.

Nearly two-in-ten (18%) say they very closely followed news about another economic story – the recent ups and downs in the stock market. This was the top story for 2% and made up 1% of coverage.

About a quarter of the public (24%) say they very closed followed news about the aftermath of the bombing and shooting attack in Norway that killed more than 70 people. That’s about the same level of interest shown one week earlier immediately following the July 22 attacks. Just more than one-in-ten (12%) say this was the story they followed most closely. The Norway terror attacks accounted for 8% of the newshole.

Almost two-in-ten (17%) say they followed news about the 2012 presidential campaign very closely, a level of interest comparable to recent weeks; 3% say this was the news they followed most closely. Election news made up 1% of coverage. 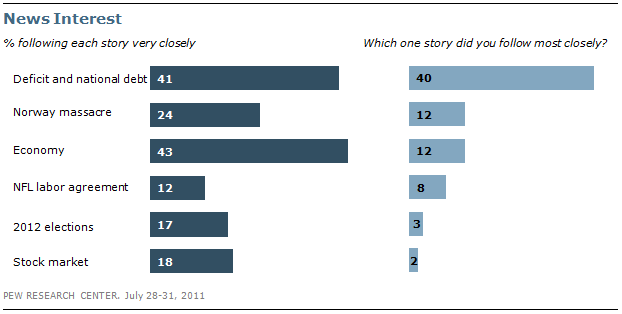 About one-in-ten (12%) say they very closely followed news about the labor agreement between the National Football League and its players union that allows the start of pre-season training. This was the top story for 8% and made up 2% of coverage. About two-in-ten men (18%) say they followed this news very closely, compared with 7% of women.

These findings are based on the most recent installment of the weekly News Interest Index, an ongoing project of the Pew Research Center for the People & the Press. The index, building on the Center’s longstanding research into public attentiveness to major news stories, examines news interest as it relates to the news media’s coverage. The weekly survey is conducted in conjunction with The Project for Excellence in Journalism’s News Coverage Index, which monitors the news reported by major newspaper, television, radio and online news outlets on an ongoing basis. In the most recent week, data relating to news coverage were collected July 25-31, and survey data measuring public interest in the top news stories of the week were collected July 28-31 from a nationally representative sample of 1,001 adults.