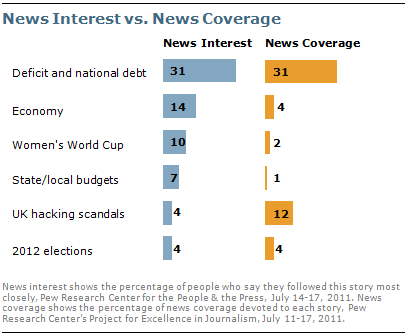 The debate over raising the federal debt limit proved to be the public’s – and the media’s – top news story last week as the federal government neared a possible default and high level deficit-reduction talks produced no agreement.

About three-in-ten (31%) say they followed the discussions about how to address the federal deficit and national debt more closely than any other story. Another 14% say they most closely followed news about the conditi0n of the nation’s struggling economy, according to the latest weekly News Interest Index survey conducted July 14-17 among 1,006 adults by the Pew Research Center for the People & the Press.

News about the debt limit debate made up 31% of the newshole, much more than any other story. More general news about the state of the economy accounted for 4% of coverage, while state and local budget woes accounted for another 1%, according to a separate analysis by the Pew Research Center’s Project for Excellence in Journalism (PEJ). 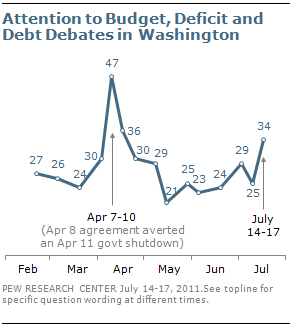 Looking at a separate measure of interest, 34% of the public says they followed news about the debt talks very closely. That’s up from 25% one week earlier. Still, it falls short of the 47% who very closely followed the final days of the April budget standoff between the White House and congressional Republicans that nearly led to a government shutdown.

Many apparently do not see a similar sense of urgency in the debt limit debate. While four-in-ten (40%) say that, from what they’ve read and heard, it is absolutely essential that the federal debt limit be raised by Aug. 2 to avoid an economic crisis, about as many (39%) say the country can go past this date without major economic problems, according to a separate Pew Research/Washington Post poll released Monday.

While Republicans and Democrats offer differing perspectives on that question, partisans express comparable levels of interest in the debt limit story. Nearly four-in-ten in each (38%) say they followed news about the debate very closely last week; 31% of independents also say this.

Debt Limit Debate Seen as Important but Hard to Understand 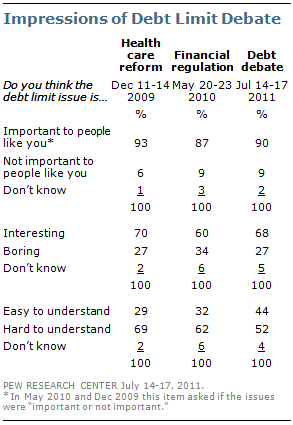 An overwhelming majority of Americans agree that the debate over the nation’s debt limit is important to people like themselves (90%), while nearly seven-in-ten (68%) say it is interesting. The public is more narrowly divided on whether the debate is tough to understand. Just more than half (52%) say it is hard to understand, while 44% say it is easy to understand. Differences among partisans on these questions are slim.

The overall numbers are similar to public assessments of last year’s debate over financial regulatory changes or the debate in late 2009 over health care reform legislation. Still, in both of those earlier debates, greater numbers said the topics were hard to understand. In December 2009, for example, 69% said the health care debate was hard to understand, while 29% said it was easy to grasp.

About four-in-ten Americans (41%) say they followed news about the condition of the U.S. economy very closely last week. That’s comparable to the level of interest in recent weeks amid continuing signs of a slowing recovery.

But the public focused most closely on the related debate over the federal debt limit, a key component of which has been the potential impact on the recovery if the government cannot borrow more money. About three-in-ten (31%) say this was the story they followed most closely.

More than a quarter (27%) say they very closely followed news about local and state budget problems; 7% say this was the news they followed most closely. Primarily a local story, this news accounted for 1% of the coverage examined by PEJ.

Nearly two-in-ten (18%) say they followed news about the 2012 elections very closely. That’s similar to the level of interest in recent weeks. Partisans show comparable interest in election news. This was the top story of the week for 4% of the public. News about the campaign made up 4% of coverage.

Another 15% say they very closely followed news about the U.S soccer team making the finals of the Women’s World Cup. The level of interest is comparable to the 14% that said they followed the men’s World Cup tournament in South African very closely in June 2010. One-in-ten (10%) say this was the news they followed most closely. News about the tournament accounted for 2% of the week’s coverage, according to PEJ.

As with most sports stories, men were more likely than women to follow the Women’s World Cup very closely (19% vs. 11% followed very closely). The event was also among the top stories for Americans under age 30. This is not because younger people were substantially more interested in this story than people 30 and older; relatively few in any age range report having followed the U.S. women’s World Cup team’s success very closely. But younger Americans were so much less interested in the other news of the week, that about one-in-five (19%) said this was the most interesting story to them. That’s comparable to the percent of young people rating the debt debate as their top story of the week (21%). 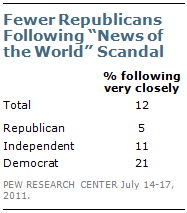 Just more than one-in-ten (12%) say they very closely followed reports that British newspapers owned by Rupert Murdoch may have hacked into people’s phones and illegally obtained financial and medical records; 4% say this was the news they followed most closely. The growing scandal accounted for 12% of the newshole, ranking this among the week’s most covered stories.

The story grew in prominence on Sunday, as the survey period was nearing its end, as a former top executive of the newspaper group was arrested and the top official at Scotland Yard resigned his post. Though overall interest has been relatively modest, there are big differences among partisans. Roughly two-in-ten Democrats (21%) say they followed news about Murdoch’s British papers very closely last week, compared with 5% of Republicans and 11% of independents. Among Murdoch’s U.S. properties are the Fox News Channel and The Wall Street Journal. 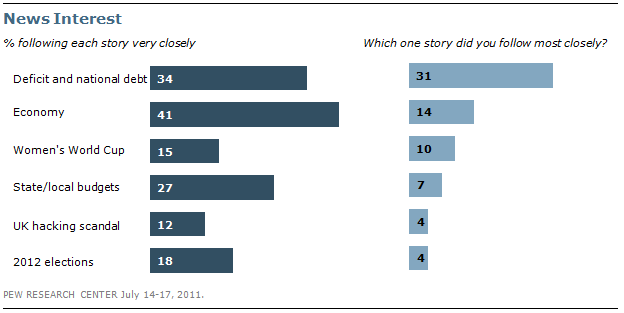 These findings are based on the most recent installment of the weekly News Interest Index, an ongoing project of the Pew Research Center for the People & the Press. The index, building on the Center’s longstanding research into public attentiveness to major news stories, examines news interest as it relates to the news media’s coverage. The weekly survey is conducted in conjunction with The Project for Excellence in Journalism’s News Coverage Index, which monitors the news reported by major newspaper, television, radio and online news outlets on an ongoing basis. In the most recent week, data relating to news coverage were collected July 11-17, and survey data measuring public interest in the top news stories of the week were collected July 14-17 from a nationally representative sample of 1,006 adults.