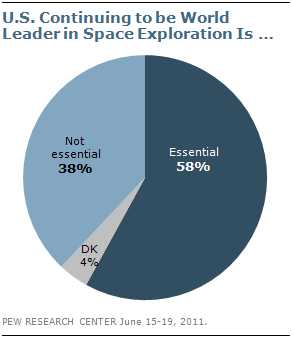 On the eve of the final mission of the U.S. space shuttle program, most Americans say the United States must be at the forefront of future space exploration. Fifty years after the first American manned space flight, nearly six-in-ten (58%) say it is essential that the United States continue to be a world leader in space exploration; about four-in-ten say this is not essential (38%). 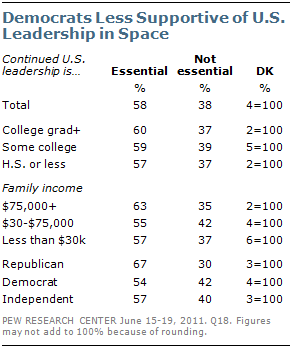 Majorities in nearly all demographic groups say it is essential that the U.S. continue to be at the vanguard of space exploration. And partisan groups largely agree that American leadership is vital, although this view is more prevalent among Republicans. Two-thirds of Republicans (67%) say the nation must continue to play an international leadership role in space exploration; smaller majorities of Democrats (54%) and independents (57%) say this.

Shuttle Has Been “Good Investment” 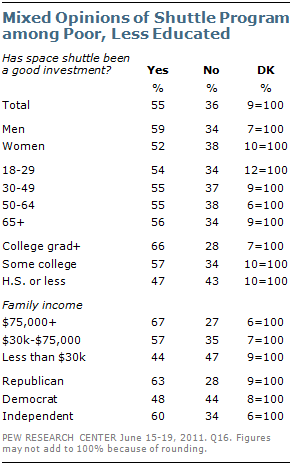 About two-thirds of college graduates (66%) say the shuttle program has been a good investment, as does a smaller majority of those with some college education (57%). Among those with no college experience, assessments of the value of the shuttle program are more mixed: 47% say it has been a good investment, while 43% say it has not. 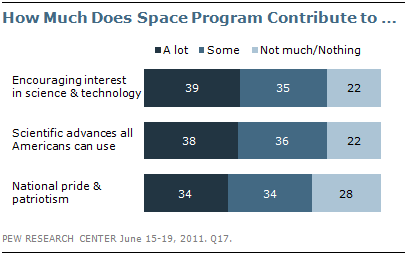 There are only modest political and demographic differences in opinions about the space program’s contributions. More men than women say the program contributes a lot to scientific advances (by 45% to 31%) and encouraging interest in science and technology (44% to 35%).

Majority Sees U.S. Leadership in Space as Essential
OverviewShuttle Has Been “Good Investment”Benefits of Space Program
About the Survey