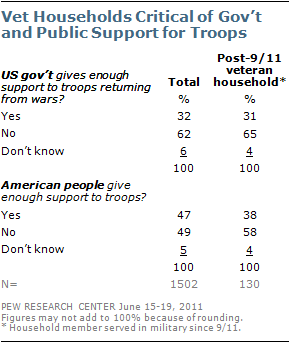 As President Obama begins to draw down U.S. forces in Afghanistan, most Americans continue to say that government support for troops returning from war is falling short.

The public remains divided over whether the American people give enough support to soldiers who have served in Iraq and Afghanistan. Opinions on this tilt more negative, however, among the families of those who have served in the military since the 9/11 terror attacks.

The latest national survey by the Pew Research Center for the People & the Press, conducted June 15-19 among 1,502 adults, finds that the government gets better marks for supporting returning troops than it did in 2007, amid the scandal over military medical care at Walter Reed Army Medical Center, or a year later. 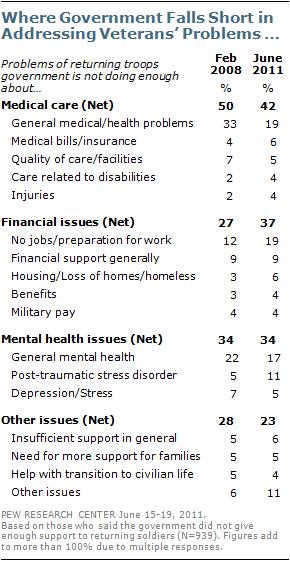 When people who say the government has not provided enough support for returning troops are asked for specific problems, nearly as many cite a lack of help with financial issues (37%) as problems with medical care (42%). Three years ago, medical care was the dominant concern, mentioned by half of those who answered the question (50%). About a quarter (27%) cited financial issues.

Among financial concerns cited, 19% say the government is not doing enough to address the lack of jobs or preparation for work among returning soldiers. In February 2008, 12% cited these concerns.

About a third (34%) of those who say the government has not done enough for returning troops point to mental health issues as the biggest area of concern; that is unchanged from 2008. However, specific mentions of post-traumatic stress disorder (PTSD) have doubled – from 5% to 11%. 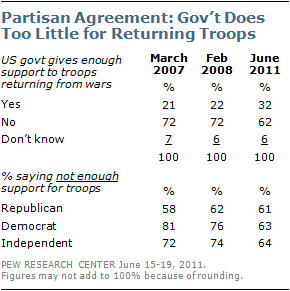 Following media revelations in early 2007 about poor medical care in government facilities given to veterans of the ongoing wars, Democrats were more likely than Republicans to say the government was not doing enough for returning troops (81% vs. 58%).

Fewer Democrats and independents fault the government’s support for returning troops today, while Republicans’ views are little changed. In the new survey, there are no significant differences among partisans on this question: 61% of Republicans, 63% of Democrats and 64% of independents say the government does not give enough support to returning solders. There also are no significant partisan differences in views of public support for returning troops.