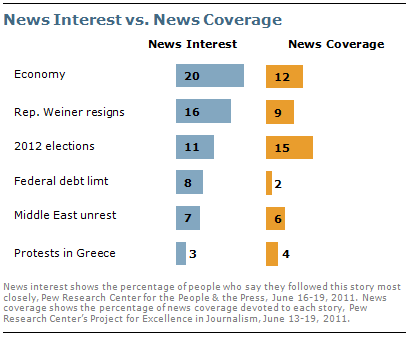 Americans last week followed news about the struggling economy and the resignation of Rep. Anthony Weiner from Congress more closely than other top stories, while the early stages of the 2012 presidential election led news coverage for this first time this year.

Two-in-ten (20%) say they followed reports about the condition of the U.S. economy most closely, while 16% followed developments in the Weiner scandal that closely, according to the latest weekly News Interest Index survey, conducted June 16-19 among 1,003 adults by the Pew Research Center for the People & the Press.

About one-in-ten (11%) say news about the 2012 presidential election was their top story. Coverage of the potential candidates, driven in large part by the Republican debate in New Hampshire, accounted for 15% of coverage, according to a separate analysis by the Pew Research Center’s Project for Excellence in Journalism (PEJ). Coverage of the economy made up 12% of the newshole, while Weiner’s resignation accounted for 9%. One week earlier, the Weiner story, including his acknowledgment that he had sent sexually-suggestive photos and messages online to at least six women, was the top story with 17% of coverage.

Romney Most Heard About GOP Candidate 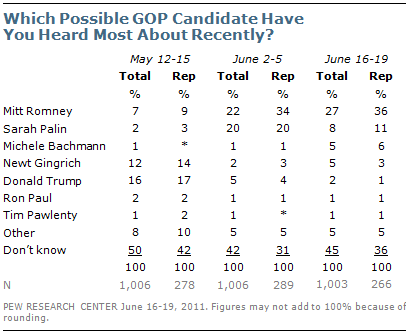 With last week’s coverage focused on the June 13 GOP debate, about a quarter of the public (23%) say they followed news about possible candidates for the 2012 presidential elections very closely. One week earlier, 18% said they were tracking candidate news this closely.

Mitt Romney is clearly the candidate the public says they are hearing the most news about, while mentions of Sarah Palin have plummeted over the past two weeks. About a quarter (27%) offer Romney’s name when asked which candidate they have heard the most about recently. That rises to 36% among Republicans. During the first week of June, 22% of the public and 34% of Republicans said they were hearing the most about the former Massachusetts governor.

In early June, the public was about as likely to say they were hearing the most about Palin (20%), but mentions of the former Alaska governor have dropped to just 8%. Among Republicans, 11% currently name Palin, down from 20% in early June.

Romney also received more coverage than other GOP contenders. According to PEJ’s analysis of election news, Romney was the lead newsmaker – featured in at least 50% of the story – in 19% of election stories. Gingrich, Bachmann and former Minnesota Gov. Tim Pawlenty were each the lead newsmaker in about 8% of stories.

About four-in-ten (39%) say they followed news about the U.S. economy very closely last week. That matches the number that said this one week earlier, amid continuing signs the recovery has slowed. News about the economy accounted for 12% of coverage.

About a quarter (24%) say they very closely followed news about the debate in Washington over whether to raise the federal debt limit; 8% say this was their top story. Republicans are more likely to say they followed this news very closely than Democrats (30% vs. 20%). About a quarter of independents (24%) say they followed it as closely. The debate over the debt limit accounted for 2% of coverage, according to PEJ. 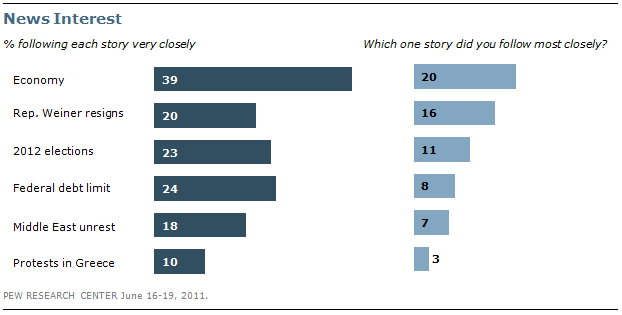 Nearly two-in-ten (18%) say they very closely followed news about the continuing anti-government unrest and violence in a number of Middle Eastern countries; 7% say this was the news they followed most closely. News about Middle East unrest made up 6% of coverage.

One-in-ten (10%) say they very closely followed news about the financial crisis and violent protests in Greece; 3% say this was the story they followed most closely. News about Greece’s financial situation accounted for 4% of the coverage analyzed by PEJ.

These findings are based on the most recent installment of the weekly News Interest Index, an ongoing project of the Pew Research Center for the People & the Press. The index, building on the Center’s longstanding research into public attentiveness to major news stories, examines news interest as it relates to the news media’s coverage. The weekly survey is conducted in conjunction with The Project for Excellence in Journalism’s News Coverage Index, which monitors the news reported by major newspaper, television, radio and online news outlets on an ongoing basis. In the most recent week, data relating to news coverage were collected June 13-19, and survey data measuring public interest in the top news stories of the week were collected June 16-19 from a nationally representative sample of 1,003 adults.