In their first major presidential debate June 13, the Republican candidates sketched out a cautious approach to U.S. global engagement that would represent a departure from the policies of the Bush administration. Yet their ideas are very much in tune with the evolving views of the GOP base.

In the Pew Research Center’s political typology survey, released May 4, majorities in every partisan group –including 55% of conservative Republicans – said the U.S. “should pay less 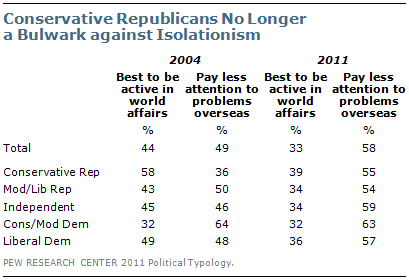 attention to problems overseas and concentrate on problems here at home.”

In December 2004, conservative Republicans had been the only group in which a majority had expressed the opposing view – 58% said “it is best for the future of our country to be active in world affairs.”

The proportion of conservative Republicans supporting U.S. activism in world affairs has fallen by 19 points to 39%. Since 2004, liberal Democrats and independents also have become less supportive of U.S. global engagement, but the change has been most dramatic among conservatives. 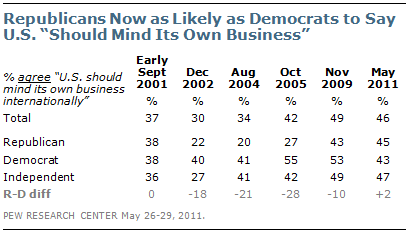 This shift is part of a broader blurring of partisan differences in opinions about America’s role in the world. A recent Pew Research Center survey found that, for the first time in a decade, as many Republicans (45%) as Democrats (43%) said the United States “should mind its own business internationally.” In three surveys conducted between 2002 and 2005, only about half as many Republicans as Democrats expressed this view. (See “Views of Mideast Unchanged by Recent Events,” June 10, 2011.) 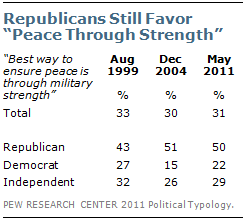 Republicans have become less supportive of U.S. global engagement, but they continue to favor a muscular approach to national security. In the political typology survey, half of Republicans (50%) supported the Reagan-era concept of “peace through strength,” while 38% said “good diplomacy is the best way to ensure peace.”

By comparison, just 29% of independents and 22% of Democrats said peace is best ensured through military strength. These views are little changed from recent years. 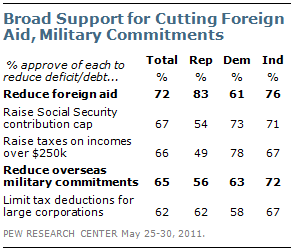 Yet there is bipartisan concern about the cost of maintaining an extensive military presence abroad, as the government struggles with a massive debt. For instance, far more Republicans (49%) say the cost of the wars in Iraq and Afghanistan contributed “a great deal” to the nation’s debt than say that about increased domestic spending (38%).

Even higher percentages of Democrats (67%) and independents (62%) point to the wars as major factors contributing to the nation’s debt. (See “More Blame Wars than Domestic Spending or Tax Cuts for Nation’s Debt,” June 7, 2011.)

This was one of five proposals (of 12 tested) that garnered support from majorities across the board; another was reducing foreign aid, which was approved by 83% of Republicans, 76% of independents and 61% of Democrats.

During the June 13 debate, Ron Paul renewed his call for pulling U.S. troops out of Afghanistan and Iraq (as well as for halting U.S. military operations in Yemen and Libya). Mitt Romney offered a more nuanced, but skeptical, view of the U.S. mission in Afghanistan, saying “I think we’ve learned that our troops shouldn’t go off and fight a war of independence for another nation.”

However, rank-and-file Republicans continue to support the U.S. military mission in Afghanistan, despite concerns about its impact on the national debt. 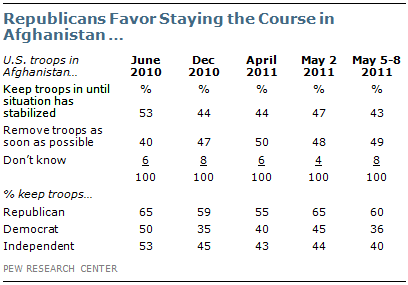 In a survey conducted May 5-8, a week after the killing of Osama bin Laden 60% of Republicans favored keeping U.S. troops in Afghanistan until the situation there has stabilized, compared with 40% of independents and 36% ofDemocrats. The partisan gap over maintaining troops in Afghanistan is not new; in fact, Republicans were far more supportive than Democrats of President Obama’s decision in late 2009 to increase the number of U.S. troops in the country (65% vs. 45%). 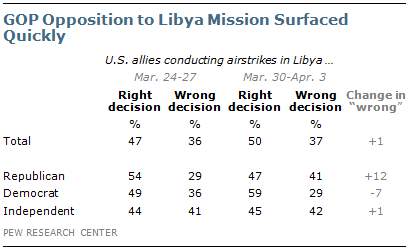 Regarding the NATO operation in Libya, however, Republicans were initially on board, but quickly became critical. Between the first and second week of the NATO mission, the proportion of Republicans saying it is the wrong decision increased by 12 points (from 29% to 41%).

In Monday’s debate, several candidates joined in criticizing the mission. Michele Bachmann said “our policy in Libya is substantially flawed,” and Newt Gingrich asserted that the cost of the operation should be a consideration. “The price tag is always a factor,” Gingrich said, “because, as General Eisenhower once he was president pointed out, as Abraham Lincoln understood, as George Washington understood, that’s part of the decision.”