A decade ago, Washington grappled with a problem that seems unreal in today’s economic climate – what to do with the budget surplus? In 2000, George W. Bush had campaigned on a pledge to return part of the surplus to taxpayers in the form of an across-the-board tax cut. Bush’s opponent, Al Gore, countered with his famous “lock box” proposal, a promise to devote surpluses to shore up Social Security and Medicare.

Bush lost the battle for public opinion about what to do with the surplus. Pew Research Center surveys in early 2001 found that nearly twice as many favored using the budget surplus for securing the finances of Social Security and Medicare than for a tax cut (37% vs. 19%).

Yet the tax cut received a boost from an unexpected rise in economic anxiety. When Bush took office, the economy was thriving – the unemployment rate of around 4% in early 2001 would be cheered today – but Americans sensed that the 1990s economic boom was drawing to a close. A Washington Post/ABC News poll in January 2001 found that 55% said that the economy was heading into a recession.

When Congress cast pivotal votes approving the tax cuts – 10 years ago this month – the public was solidly behind the proposal. In an April 2001 survey, 60% approved and just 34% disapproved of his proposal. The tax cut won the support of 83% of Republicans, 60% of independents and 41% of Democrats.

The public backed the plan in spite of a widespread belief that it would do little for poor or middle-class Americans. In February 2001, Pew Research found that just 26% viewed the proposal as fair while more than twice as many (65%) said it was unfair. Of those who viewed the proposal as unfair, an overwhelming percentage (79%) said the wealthy would mainly benefit.

In the years following the passage of Bush’s initial tax cuts (a second round of cuts was approved in 2003), the country’s yearly balance sheet moved from surplus to deficit, with the annual budget shortfall eventually surpassing a trillion dollars. Yet the patterns of opinion identified in the initial polling on Bush’s proposal were also seen during later tax battles – including last fall’s debate over extending the Bush tax cuts.

Last fall, the public favored extending the tax cuts only for those with incomes of below $250,000 – an echo of complaints a decade earlier about the unfairness of the proposed tax cuts.

However, after the lame-duck Congress extended all of the tax cuts as part of a compromise bill that also continued long-term unemployment benefits, the public once again set aside its objections and backed the final agreement. A 60% majority – the same percentage that had approved of the proposed tax cuts in April 2001 – approved of the compromise reached by Barack Obama and Congress. (For more, see “Tax Cuts Win Broad Bipartisan Support,” Dec. 13, 2010.)

Politics of the Surplus

In his first address to a joint session of Congress in February 2001, Bush said, “The people of America have been overcharged and, on their behalf, I’m here asking for a refund.” But it was a tough sell for the new president – even with members of his own party. 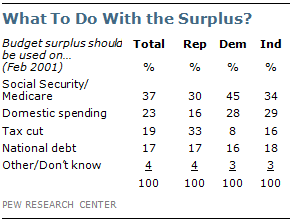 In February 2001, just a third of Republicans (33%) said the budget surplus should be used on a tax cut; nearly as many (30%) said it should be used to shore up the finances of Social Security and Medicare.

Among independents and Democrats, there was even less support for tapping the budget surplus to finance tax cuts; just 16% and 8%, respectively, favored using the surplus for this purpose.

Fears of a Downturn

As Bush took office, the public appeared to have little cause for economic concern – particularly when compared with today’s economic situation. Americans acknowledged that times were good: A Washington Post/ABC News poll in January 2001 showed that 69% viewed the economy as excellent or good, compared with just 30% who said the economy was not so good or poor. Contrast this with current views of the economy: In a Pew Research survey in April, 91% rated the economy as only fair (38%) or poor (53%); just 8% said economic conditions were excellent or good.

The public’s prediction about a recession proved accurate: A few years later, economists officially determined that the economy had gone into a recession in March 2001. But the downturn was mild and short-lived. By November, the recession had ended and the economy had begun to recover.

Shortly after the tax legislation became law in June, a majority of Americans (52%) predicted that the tax cuts were likely to stimulate the economy, according to an NBC News/Wall Street Journal survey. Yet comparable percentages said the tax cut also was likely to return the country to deficit spending (55%) 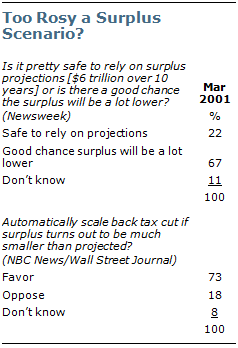 and make less money available for domestic programs such as education and Social Security (53%).

The public’s belief that deficits would return was understandable, given recent history. The country had been running substantial annual deficits since the early 1980s and Americans were having trouble truly believing that their country’s balance sheet was in the black.

In March, Newsweek asked if it was “pretty safe” to rely on surplus projections – then estimated at a staggering $6 trillion over 10 years – or whether there was a “good chance” that the surplus would be a lot lower. Fewer than a quarter (22%) said it was safe to rely on budget surplus projections, while three times as many (67%) expected the surplus to be lot lower.

Reflecting the doubts about future surpluses, there was broad support across the ideological spectrum for limiting the size of the tax cuts if, as expected, the surplus projections proved too optimistic. An NBC News/Wall Street Journal survey in March found that 73% favored automatically scaling back the tax cuts if the surplus turned out to be much smaller than projected. Comparable percentages of liberals (76%), moderates (76%) and conservatives (71%) supported automatically scaling back the tax cuts in this circumstance.

By limiting the tax cuts to a decade, Congress ensured that the tax cut would be reviewed, though there was no provision to automatically limit the tax cuts if the nation’s fiscal situation worsened.

The public’s skepticism about future surpluses – like its prediction about the coming recession– was well founded. By fiscal year 2003, the country was already facing a $300 billion annual deficit, amid surging military expenses in the wake of the 9/11 attacks, according to the Congressional Budget Office. In March of this year, the CBO estimated the budget deficit at $1.5 trillion.