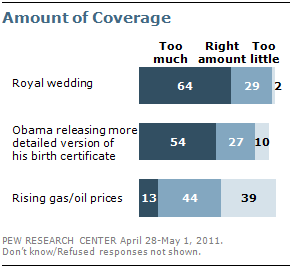 Majorities of Americans say news organizations focused too much last week on both the royal wedding in England and the release of the long-form version of Barack Obama’s birth certificate.

Nearly two-thirds (64%) say the press gave too much coverage to the April 29 wedding in London of Prince William and Kate Middleton, while 54% say the media gave too much coverage to the release of Obama’s long-form birth certificate, according to the latest weekly News Interest Index survey, conducted April 28-May 1 among 1,006 adults. (This survey was conducted before U.S. forces killed Osama bin Laden; a survey released earlier today found that while most Americans heard about bin Laden’s death from television, many young people first learned about the news from social networking.)

On the other hand, roughly four-in-ten (39%) say news organizations provided too little coverage of news about rising gas and oil prices, while 44% say the media got the amount of coverage about right. Just 13% say the press gave too much coverage to this critical pocketbook concern. 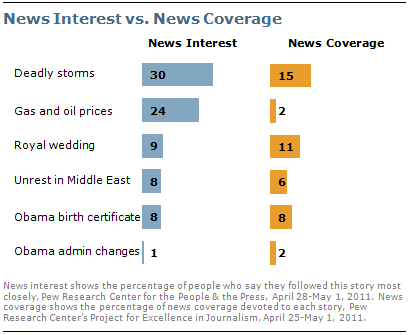 Obama’s decision to release his long-form birth certificate – and comments to reporters about his desire to end the questions by some about whether he was actually born in the United States – accounted for about 8% of coverage. But the numbers were much higher for cable news (18% of coverage) and talk radio (21%). 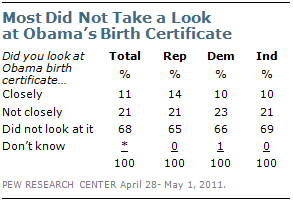 And, despite easy access to a copy of the birth
certificate at many news web-sites or in many daily newspapers, just 11% say they took a close look at the document. Two-in-ten (21%) say they took a look – but not closely. But about two-thirds (68%) say they did not look at all. That includes roughly equal numbers of Republicans (65%), Democrats (66%) and independents (69%). 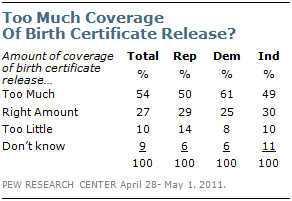 Women – specifically women age 50 and over – proved most interested in the royal wedding pageantry in London last Friday. About a third of the public (34%) says they watched the 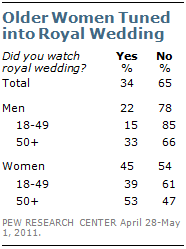 wedding; 65% say they did not. One week earlier, 19% had said they planned to watch, but the wedding was hard to miss Friday morning on television or online.

Overall, the percentage of the public that says news organizations gave the royal wedding too much coverage (64%) matched the number that said this one week earlier during the run-up to the event. That week, 25% said news organizations were giving the wedding the right amount of coverage and 4% said too little.

Americans focused most closely last week on the deadly storms in the South and news about rising fuel prices. They paid less attention to the other top stories.

Another 16% say they followed news about the royal wedding very closely; 9% say this was the story they followed most closely. The story accounted for 11% of coverage.

Just 9% say they followed news about changes to Obama’s national security team very closely; 1% say this was their top story for the week. The announcement that Leon Panetta would become secretary of state and Gen. David Petraeus would replace him as director of the Central Intelligence Agency accounted for 2% of coverage.

These findings are based on the most recent installment of the weekly News Interest Index, an ongoing project of the Pew Research Center for the People & the Press. The index, building on the Center’s longstanding research into public attentiveness to major news stories, examines news interest as it relates to the news media’s coverage. The weekly survey is conducted in conjunction with The Project for Excellence in Journalism’s News Coverage Index, which monitors the news reported by major newspaper, television, radio and online news outlets on an ongoing basis. In the most recent week, data relating to news coverage were collected April 25 to May 1, and survey data measuring public interest in the top news stories of the week were collected April 28 to May 1, from a nationally representative sample of 1,006 adults.