The News Interest Index is a weekly survey conducted by the Pew Research Center for the People & the Press aimed at gauging the public’s interest in and reaction to major news events. This project has been undertaken in conjunction with the Project for Excellence in Journalism’s News Coverage Index, an ongoing content analysis of the news. The News Coverage Index catalogues the news from top news organizations across five major sectors of the media: newspapers, network television, cable television, radio and the internet. Each week (from Monday through Sunday) PEJ compiles this data to identify the top stories for the week. (For more information about the Project for Excellence in Journalism’s News Coverage Index, go to www.journalism.org.) The News Interest Index survey collects data from Thursday through Sunday to gauge public interest in the most covered stories of the week.

Results for this survey are based on telephone interviews conducted April 28-May 1, 2011, among a national sample of 1,006 adults 18 years of age or older living in the continental United States (675 respondents were interviewed on a landline telephone, and 331 were interviewed on a cell phone, including 150 who had no landline telephone). The survey was conducted by interviewers at Princeton Data Source under the direction of Princeton Survey Research Associates International. A combination of landline and cell phone random digit dial samples were used; both samples were provided by Survey Sampling International. Interviews were conducted in English. Respondents in the landline sample were selected by randomly asking for the youngest adult male or female who is now at home. Interviews in the cell sample were conducted with the person who answered the phone, if that person was an adult 18 years of age or older. 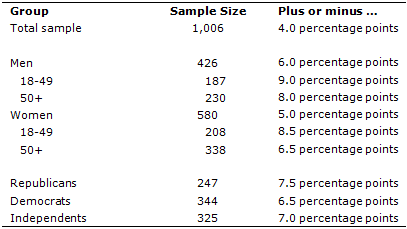 Modest Interest in Run-Up to Royal Wedding
Stimulus News Seen As More Negative Than Positive
Mixed Reactions to Leak of Afghanistan Documents
Strong Interest in AIG, Positive Views of Congress’ Response
Obama’s Trip Closely Followed
Americans overwhelmingly say marijuana should be legal for recreational or medical use
Biden Nears 100-Day Mark With Strong Approval, Positive Rating for Vaccine Rollout
Quiz: Are you a Core Conservative? A Solid Liberal? Or somewhere in between?
What the data says about gun deaths in the U.S.
Social Media Use in 2021