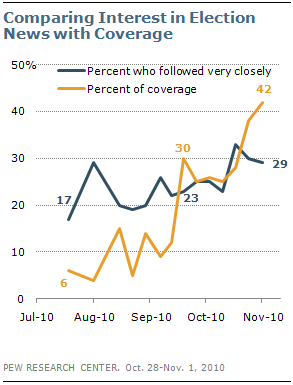 Both the public and the media focused most closely last week on the congressional elections as Tuesday’s midterm vote approached. Still, the public’s interest in election news did not increase in the final days of the campaign, despite heavy news coverage.

The latest News Interest Index survey, conducted among 1,003 adults from Oct. 28 to Nov. 1, the day before the midterm election, finds that 29% said they were following news about the congressional elections very closely; that is little changed from 30% a week earlier and 33% in mid-October.

The elections were the week’s most closely followed news story: 24% said they followed the elections more closely than any other story compared with 18% who cited news about the economy. However, coverage of the elections accounted for 42% of coverage, far outpacing any other story, according to a separate analysis by the Pew Research Center’s Project for Excellence in Journalism (PEJ).

Throughout the campaign season, Republicans have tracked election news more closely than Democrats. Last week, 40% of Republicans said they followed this news very closely, compared with 31% of Democrats and 22% of independents. 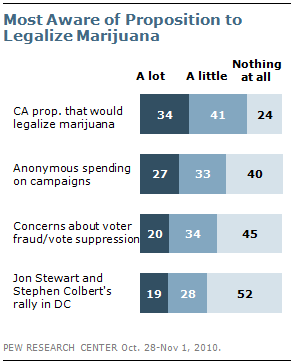 Going into Tuesday’s voting, three-quarters of the public had heard at least a little about the California ballot proposal that would have legalized the use of marijuana in the state. About a third (34%) said they heard a lot about the initiative, while 41% said they heard a little. About a quarter (24%) heard nothing at all.

Among partisans, there was little difference in the percentages that had heard a lot about the California marijuana ballot initiative. About a third of Republicans (32%), Democrats (35%) and independents (34%) said they heard a lot about this story.

Democrats (29%), Republicans (24%) and independents (27%) were about equally likely to say they had heard a lot about news about spending on this year’s campaigns by groups with funding for anonymous donors.

On the other hand, Democrats were more likely to have heard a lot about the Stewart-Colbert event on the Mall than Republicans (24% vs. 14%). About two-in-ten independents (19%) say they heard a lot about last weekend’s rally. 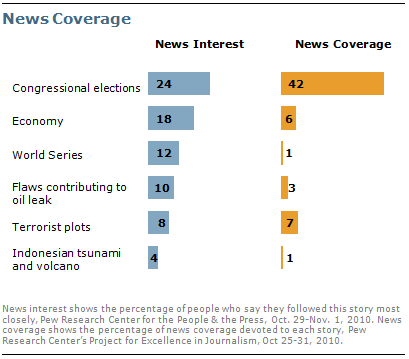 Despite the long election year, the public often paid more attention to other major, long-running stories – such as the troubled economy or the Gulf oil spill.

About a quarter (24%) said the congressional election was the news they most closely followed last week; 18% say they followed news about the economy more closely than any other news story.

Still, a greater percentage (39%) said they followed news about the economy very closely than said the same about the midterm elections (29%). With ongoing concerns about the strength of the economic recovery, this has been the case for much of 2010. 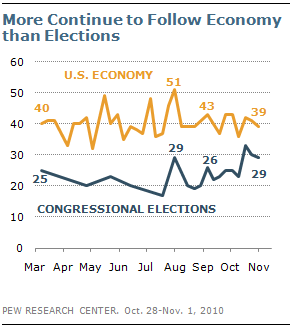 One-in-ten (10%) said they followed developments in the government investigation into the causes of the Gulf oil spill more closely than any other news; 19% said they followed this news very closely. Reports that the companies working on the well had been aware of potential flaws in certain materials accounted for 3% of coverage.

About one-in-ten (11%) said they very closely followed news about the tsunami and earthquake that hit Indonesia last week; 4% say this was the news they followed most closely. The natural disasters accounted for 1% of coverage. These findings are based on the most recent installment of the weekly News Interest Index, an ongoing project of the Pew Research Center for the People & the Press. The index, building on the Center’s longstanding research into public attentiveness to major news stories, examines news interest as it relates to the news media’s coverage. The weekly survey is conducted in conjunction with The Project for Excellence in Journalism’s News Coverage Index, which monitors the news reported by major newspaper, television, radio and online news outlets on an ongoing basis. In the most recent week, data relating to news coverage were collected October 25-31, and survey data measuring public interest in the top news stories of the week were collected October 28 to November 1, from a nationally representative sample of 1,003 adults.

The News Interest Index is a weekly survey conducted by the Pew Research Center for the People & the Press aimed at gauging the public’s interest in and reaction to major news events. This project has been undertaken in conjunction with the Project for Excellence in Journalism’s News Coverage Index, an ongoing content analysis of the news. The News Coverage Index catalogues the news from top news organizations across five maj
or sectors of the media: newspapers, network television, cable television, radio and the internet. Each week (from Monday through Sunday) PEJ compiles this data to identify the top stories for the week. (For more information about the Project for Excellence in Journalism’s News Coverage Index, go to www.journalism.org.) The News Interest Index survey collects data from Thursday through Sunday to gauge public interest in the most covered stories of the week. This week’s survey also included interviewing on Monday.

Results for this survey are based on telephone interviews conducted under the direction of Princeton Survey Research Associates International among a national sample of 1,003 adults living in the continental United States, 18 years of age or older, from October 28-November 1 (672 respondents were interviewed on a landline telephone, and 331 were interviewed on a cell phone, including 134 who had no landline telephone). Both the landline and cell phone samples were provided by Survey Sampling International. Interviews were conducted in English.