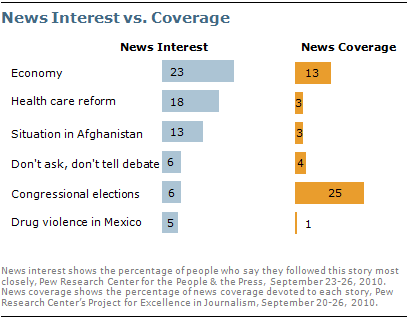 Nearly a quarter (23%) of the public says they followed news about the economy more closely than any other major story. Just 6% say they followed news about this year’s congressional elections most closely, according to the latest News Interest Index survey of 1,010 adults conducted Sept. 23-26 by the Pew Research Center for the People & the Press.

The midterm election campaign accounted for 25% of news coverage, almost double the 13% given to news about the economy, according to a separate analysis by the Pew Research Center’s Project for Excellence in Journalism (PEJ). 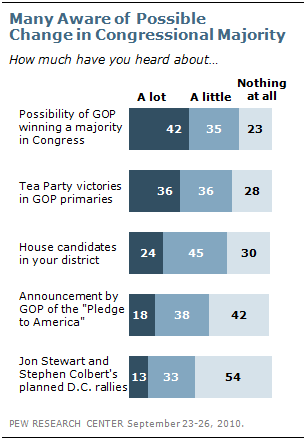 Just 18% say they have heard a lot about the legislative blueprint unveiled by House GOP leaders, called “A Pledge to America.” Close to four-in-ten (38%) say they heard a little about this, while 42% say they heard nothing at all. 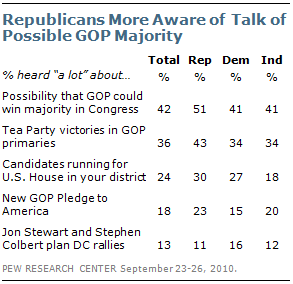 Republicans are more likely to say they have heard a lot about the possibility that the GOP could win a majority in Congress (51%) than are Democrats or independents (both 41%). On other questions, though, the differences are slim or not significant.

More than four-in-ten Republicans (43%) say they have heard a lot about the recent Tea Party candidate victories in GOP primaries, not much different from the 34% of both Democrats and independents that say this.

Three-in-ten Republicans (30%) say they have heard a lot about the candidates for the U.S. House in their districts, about the same as the 27% of Democrats that say this.

While news about the economy topped the News Interest Index (23% most closely), nearly as many (18%) say they tracked news about portions of the federal health care law taking effect more closely than other major news. Almost four-in-ten (37%) say they followed this news very closely. Reporting about the new law made up 3% of the newshole as measured by PEJ.

Fewer than one-in-ten (6%) say they followed the debate in Congress over the Pentagon’s “Don’t Ask, Don’t Tell” policy concerning gays in the military most closely, while 24% say they followed this debate very closely. News about the policy made up 4% of coverage.

These findings are based on the most recent installment of the weekly News Interest Index, an ongoing project of the Pew Research Center for the People & the Press. The index, building on the Center’s longstanding research into public attentiveness to major news stories, examines news interest as it relates to the news media’s coverage. The weekly survey is conducted in conjunction with The Project for Excellence in Journalism’s News Coverage Index, which monitors the news reported by major newspaper, television, radio and online news outlets on an ongoing basis. In the most recent week, data relating to news coverage were collected September 20-26, and survey data measuring public interest in the top news stories of the week were collected September 23-26, from a nationally representative sample of 1,010 adults.

Results for this survey are based on telephone interviews conducted under the direction of Princeton Survey Research Associates International among a national sample of 1,010 adults living in the continental United States, 18 years of age or older, from September 23-26, 2010 (675 respondents were interviewed on a landline telephone, and 335 were interviewed on a cell phone, including 148 who had no landline telephone). Both the landline and cell phone samples were provided by Survey Sampling International. Interviews were conducted in English.