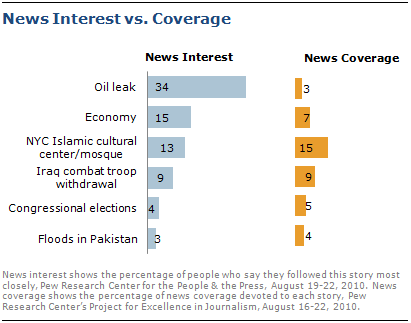 While the media focused on the emotionally-charged debate over plans to build an Islamic mosque and cultural center near the World Trade Center site in New York City last week, the public continued to track the Gulf oil leak.

About a third of the public (34%) says they followed news about the oil leak more closely than other major stories, 15% say they followed news about the economy most closely and 13% say they focused most closely on the mosque debate, according to the latest weekly News Interest Index survey, conducted Aug 19-22 by the Pew Research Center for the People & the Press among 1,003 adults. Another 9% say their top story was the withdrawal of the last U.S. combat forces from Iraq.

The controversy over the Islamic center accounted for 15% of news coverage, according to a separate analysis by the Pew Research Center’s Project for Excellence in Journalism (PEJ), making it the most reported story of the week. The war in Iraq and the withdrawal of U.S. combat forces accounted for 9% of the newshole, making it the second most reported story; economic news accounted for 7%. News about the oil leak took up just 3% of coverage. The public’s continued high interest likely reflects the perceived importance of the story.

Partisan Divide in Interest In Mosque 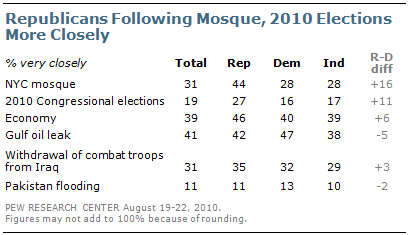 Republicans, Democrats and independents show comparable levels of interest in the Gulf oil leak and the economy, but Republicans express greater interest in the debate over the Islamic center in New York City and in the 2010 Congressional elections.
In total, 31% of the public says they followed news about the mosque debate very closely last week. More than four-in-ten Republicans (44%) say this, compared with 28% each of Democrats and independents.

A separate Pew Research analysis this week, based on questions included in the same survey, found about half of the public (51%) says they agree more with those who object to the building of the center than those who think the center should be allowed to be built (34%). Republicans are more likely to side with those who oppose building the center (74%) than are independents (50%) or Democrats (39%). (See: Public Remains Conflicted over Islam)

On other stories, there is little difference among partisan groups. Looking at the public as a whole, 31% say they followed news about the withdrawal of combat troops from Iraq very closely. That includes 35% of Republicans, 32% of Democrats and 29% of independents.

About four-in-ten say they very closely followed the oil leak in the Gulf of Mexico (41%) and reports about the condition of the economy (39%). Again, the partisan differences are not significant.

Overall, about one-in-ten (11%) say they followed news about the floods in Pakistan very closely; 3% say this was the news they followed most closely. Partisans showed about the same level of interest. The floods made up 4% of coverage this week. 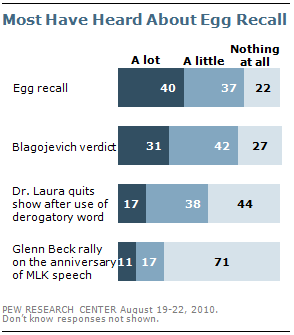 More than three quarters of the public say they heard at least a little last week about the recall of hundreds of millions of eggs after an outbreak of salmonella. Four-in-ten heard a lot about this, while 37% heard a little. Just more than two-in-ten (22%) say they heard nothing at all.

Just 11% said they heard a lot about Glenn Beck’s rally planned for Aug. 28 in Washington, D.C., on the anniversary of Martin Luther King’s famous speech from the steps of the Lincoln Memorial. Another 17% say they heard a little about this, but 71% say they heard nothing at all.

These findings are based on the most recent installment of the weekly News Interest Index, an ongoing project of the Pew Research Center for the People & the Press. The index, building on the Center’s longstanding research into public attentiveness to major news stories, examines news interest as it relates to the news media’s coverage. The weekly survey is conducted in conjunction with The Project for Excellence in Journalism’s News Coverage Index, which monitors the news reported by major newspaper, television, radio and online news outlets on an ongoing basis. In the most recent week, data relating to news coverage were collected August 16-22, and survey data measuring public interest in the top news stories of the week were collected August 19-22, from a nationally representative sample of 1,003 adults.

Results for this survey are based on telephone interviews conducted under the direction of Princeton Survey Research Associates International among a national sample of 1,003 adults living in the continental United States, 18 years of age or older, from August 19-22, 2010 (672 respondents were interviewed on a landline telephone, and 331 were interviewed on a cell phone, including 120 who had no landline telephone). Both the landline and cell phone samples were provided by Survey Sampling International. Interviews were conducted in English.