The controversy surrounding the firing of U.S. Department of Agriculture official Shirley Sherrod attracted widespread attention from the news media last week and was the dominant story on cable news networks. The public, however, showed modest interest in the Sherrod affair and, as has been the case since early May, the oil leak in the Gulf of Mexico was by far the public’s most closely followed news story. 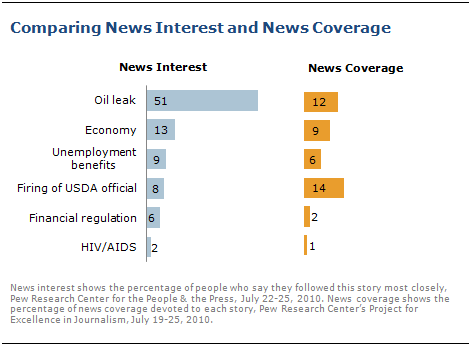 Moreover, as many Americans say the news media gave the Sherrod story too much coverage (34%) as the right amount of coverage (34%); just 22% say the story received too little coverage. Sherrod was fired from her USDA position after a conservative blogger posted edited video of comments she made about race.

The latest News Interest Index survey, conducted July 22-25 among 1,004 adults by the Pew Research Center for the People & the Press, finds that 51% say the oil leak was the story they followed most closely last week, compared with just 8% who cited news reports about the Sherrod controversy. News about the economy – at 13% most closely – also drew more interest than the Sherrod story.

A separate analysis by Pew Research’s Project for Excellence in Journalism (PEJ) finds that reports on Sherrod’s firing accounted for 14% of all coverage last week, but as much as 28% of coverage on July 21, after it became clear that the video posted by conservative blogger Andrew Breitbart took Sherrod’s comments about race out of context. The White House subsequently apologized to Sherrod, as did many news commentators.

For the week, the Sherrod story accounted for 33% of the cable newshole, more than double the amount of coverage devoted to the oil leak, the next biggest story, according to PEJ. (For a day-by-day account of how news organizations covered the story, see PEJ’s “The Reconstruction of a Media Mess”).

Most See HIV/AIDS Progress as Undercovered

While 34% say there has been too much coverage of the Sherrod story, and 31% say that about coverage of 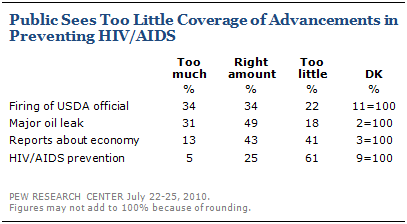 That story received little coverage and attracted scant public interest. Just 1% of all news coverage was devoted to advancements in preventing HIV/AIDS; 2% of the public cited it as their top story of the week. 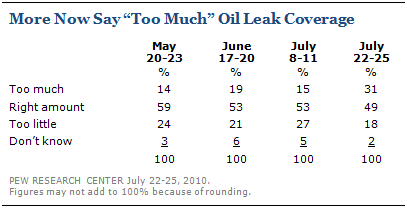 More Americans continue to say they trust information about the Gulf Coast oil leak from news organizations than from the federal government or BP.

About two-thirds (64%) say they have a lot (15%) or some (49%) trust in the information about the leak coming from news organizations. This compares with 52% who have at least some trust in information from the federal government and just 34% who say they trust BP for news about the Gulf Coast spill. These figures have changed little since early June.

Majorities of Democrats (69%), independents (66%) and Republicans (60%) say they have a lot or some trust in information from news organizations on the oil leak. These opinions also are little changed from early June. 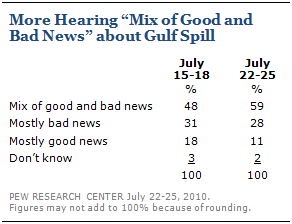 Despite apparent progress in closing the well, the public is no more likely than they were one week ago to say they’ve been hearing mostly good news about the situation in the Gulf. In fact, the percentage saying they’ve been hearing mostly positive news has dipped slightly from 18% to 11%. At the same time, the percentage hearing a mix of good and bad news has climbed 11 points (from 48% to 59%).

Interest in the Gulf oil leak remained strong with 59% following news about the spill very closely and 51% saying it was the story they followed more closely than any other. Coverage, however, was down somewhat when compared with recent weeks; stories about the Gulf Coast oil leak accounting for 12% of coverage, according to PEJ. Last week, coverage of the oil spill filled 20% of the newshole. 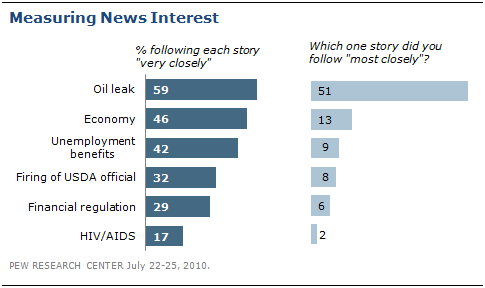 Close to half (46%) say they have been following reports about the condition of the U.S. economy very closely; 13% say this was the one story they followed more closely than any other. Coverage of the economy – excluding reports on the financial regulation bill and unemployment benefits – made up 9% of the newshole.

About four-in-ten (42%) followed news about Congress voting to extend unemployment benefits very closely, while 9% say this was their top story of the week. The national media devoted 6% of its overall coverage to stories about unemployment benefits.
The financial regulation bill passed by Congress and signed by President Obama captured the very close interest of 29% of the public and 6% followed the story more closely than any other. Coverage was modest, filling 2% of the newshole.

News about advancements in methods to prevent the spread of HIV/AIDS received relatively little public attention: 17% followed this story very closely and just 2% called it their top story of the week. News stories about HIV/AIDS prevention accounted for only 1% of coverage.

These findings are based on the most recent installment of the weekly News Interest Index, an ongoing project of the Pew Research Center for the People & the Press. The index, building on the Center’s longstanding research into public attentiveness to major news stories, examines news interest as it relates to the news media’s coverage. The weekly survey is conducted in conjunction with The Project for Excellence in Journalism’s News Coverage Index, which monitors the news reported by major newspaper, television, radio and online news outlets on an ongoing basis. In the most recent week, data relating to news coverage were collected July 19-25, and survey data measuring public interest in the top news stories of the week were collected July 22-25, from a nationally representative sample of 1,004 adults.

Results for this survey are based on telephone interviews conducted under the direction of Princeton Survey Research Associates International among a national sample of 1,004 adults living in the continental United States, 18 years of age or older, from July 22-25, 2010 (672 respondents were interviewed on a landline telephone, and 332 were interviewed on a cell phone, including 127 who had no landline telephone). Both the landline and cell phone samples were provided by Survey Sampling International. Interviews were conducted in English.