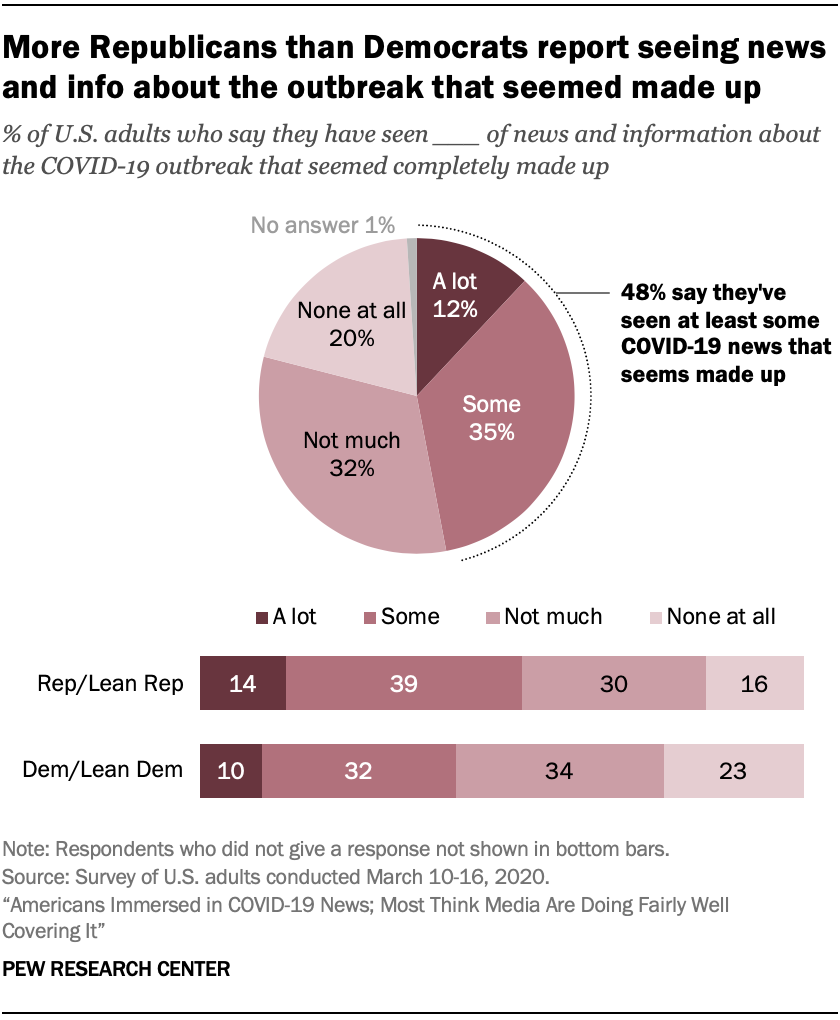 Made-up news about the coronavirus has ranged from fake cures to false news reports to conspiracy theories. These efforts seem to have had at least some impact on the American public. About half of U.S. adults (48%) report seeing at least some made-up news or information regarding the outbreak of COVID-19, with 12% saying they have seen a lot. About a third (32%) say they have not seen much, and 20% say they’ve not seen any at all.

Republicans and Republican-leaning independents are more likely than Democrats and Democratic leaners to say they have seen at least some made-up news about COVID-19: 53% vs. 42%. About a quarter of Democrats (23%) and 16% of Republicans say they’ve seen none at all.

Adults under age 50 (52%) are somewhat more likely than those ages 50 and older (43%) to say they have seen at least some made-up news about the outbreak. 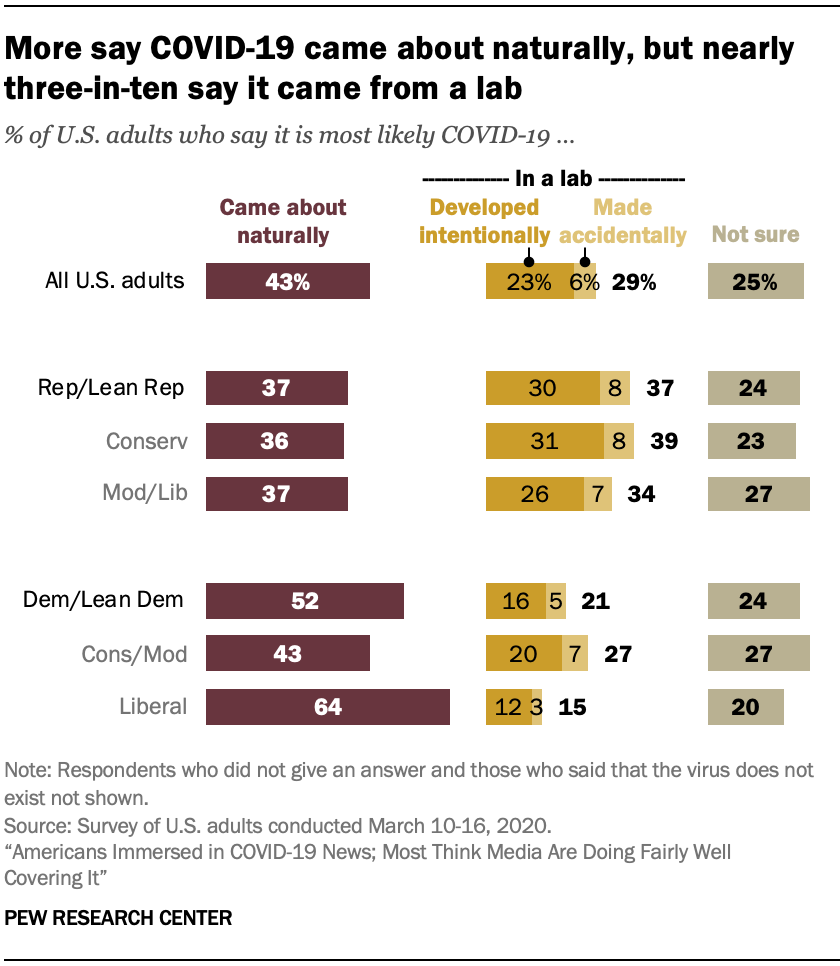 Republicans – and conservative Republicans in particular – are far more likely than Democrats to assert human involvement in the creation of COVID-19. In fact, as many Republicans (including leaners) say the virus was made in a lab as say it came about naturally (37% for both) – with 30% saying it was created intentionally.

Conservative Republicans are more likely than moderate or liberal Republicans to say the virus was an intentional human effort (31% vs. 26%).

Among Democrats, about half (52%) say the new coronavirus came about naturally, but a good deal of uncertainty still exists. Roughly two-in-ten (21%) express a belief in human involvement, including 16% who think it was intentionally made; the remaining 24% are unsure.

Experts at the ?t=321″>National Institutes of Health and World Health Organization, as well as pharmaceutical industry researchers, have stated that it will be at least a year before a vaccine for COVID-19 could be available to the public. But other statements, including some from President Donald Trump, have sometimes given the impression it could be sooner. (Reports of the first trials for a vaccine arrived around the end of the survey period.) 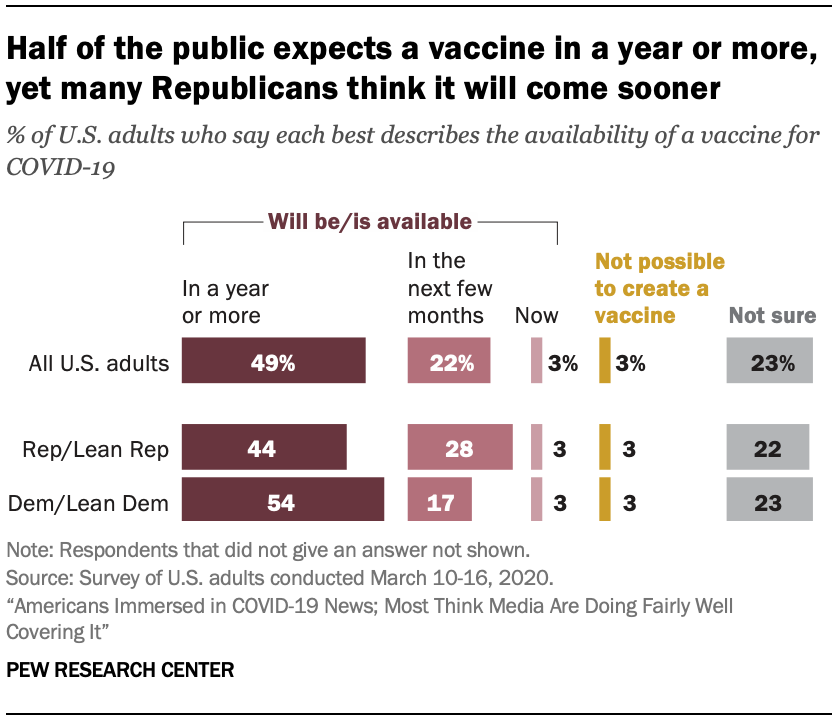 These findings reveal some confusion around this question. When asked about the availability of a vaccine for COVID-19, about half of Americans (49%) say it will take a year or more. But 22% say a vaccine is likely to be available in the next few months. Few believe there is a vaccine available now (3%) or that it is impossible to create one (3%). And about a quarter (23%) are unsure.

Both Republicans and Democrats (including those who lean to each party) are most likely to say a vaccine will take at least a year, though Democrats report this at higher levels than Republicans: 54% of Democrats and 44% of Republicans.

Instead, Republicans are more likely than Democrats to expect there to be a vaccine for COVID-19 in the next few months: 28% vs. 17%, respectively.

Americans ages 65 and older are the age group most likely to say a vaccine will be available in a year or more, at 61%.

Next: 3. Within party, media diet makes a difference in thoughts and perceptions about COVID-19
← Prev Page
Page1Page2You are reading page3Page4
Next Page →

Americans Immersed in COVID-19 News; Most Think Media Are Doing Fairly Well Covering It 1. Majorities think the news media have done a good job overall covering COVID-19 but have exaggerated the risks
2. Knowledge and perception surrounding COVID-19
Many Americans suspect human role in COVID-19 originsAbout half of Americans say a vaccine would be available in a year or more
3. Within party, media diet makes a difference in thoughts and perceptions about COVID-19