Other factors beyond partisan dynamics are linked with Americans’ assessments of the news media – though perhaps not as dramatically. Two additional areas stand out in this analysis: trust of others overall and demographic characteristics.

High trusters – those with high levels of trust in others overall – are more likely than low trusters – those with lower levels of trust in others – to trust the information they get from national news organizations, think that journalists are ethical, have confidence in journalists to serve the public good, and feel loyal to their own sources of news. (For more information on the measures of personal trust, see the box below.) 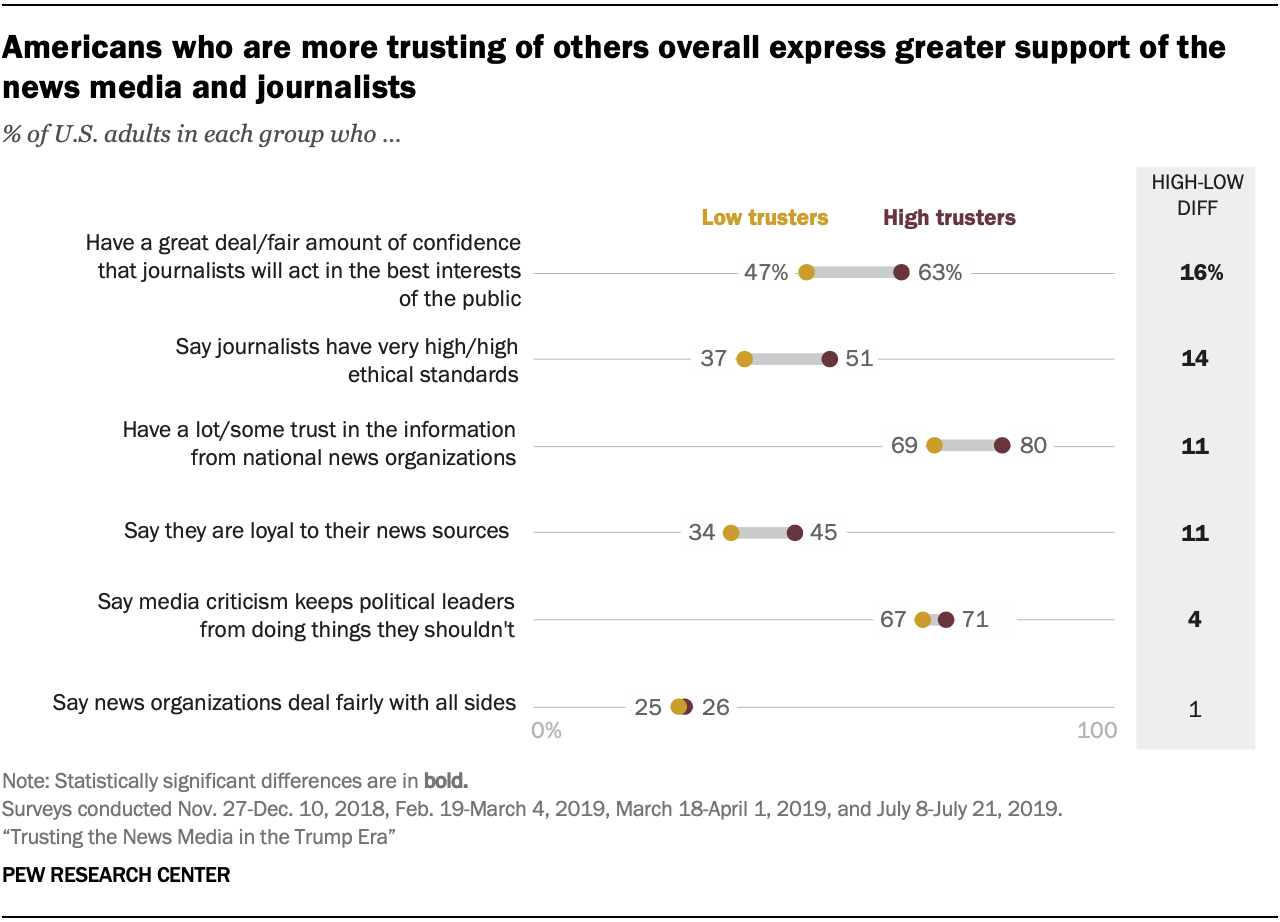 For example, high trusters are 16 percentage points more likely to have a great deal or fair amount of confidence in journalists to act in the best interests of the public (63% vs. 47%, respectively). Similarly, high trusters are 14 points more likely than low trusters to say that journalists have very high or high ethical standards (51% vs. 37%). These findings are in line with previous Pew Research Center studies showing that high trusting individuals tend to be more supportive and confident in a range of institutions.

To capture a measure of trust in others, researchers built a scale based off three separate survey questions. These questions include:

Peoples’ answers were organized into a spectrum of personal trust in the following way:

The three items were asked on a survey conducted between Nov. 27-Dec. 10, 2018. The findings in this section show the results comparing the “high trusters” and the “low trusters.” For a look at the findings that include the “medium trusters,” see the Appendix. For more information, see the following report: Trust and Distrust in America.

Americans’ level of personal trust has less connection with their view of the news media’s watchdog role or their likelihood to say news organizations are fair in their coverage of political and social issues, however.

Demographics and trust in the news media

The survey data used in this analysis highlights several interesting differences by race and ethnicity, age, educational attainment, urban-rural residency and religion. Below is a summary of some of the demographic findings. For more details, see the Appendix.

Factors with limited association with trust in the news media

The overall goal of this study was to integrate a wide range of concepts to develop a comprehensive understanding of what factors connect to the public’s trust in the news media today. The analysis shows how partisanship – including party identification, approval of Trump and engagement with politics and the news – are strongly linked with Americans’ evaluations of the news media. Other factors such as trust in others and demographic characteristics are also connected, but not as dramatically.

Additional measures analyzed, however, had a more limited, inconsistent or no connection to the public’s trust in the news media. These include: