Data in this report are drawn from a wave of the American Trends Panel (ATP), conducted from Nov. 29 to Dec. 12, 2016, among 4,183 respondents. The margin of sampling error for the full sample of 4,183 respondents is plus or minus 2.7% percentage points. The American Trends Panel, created by Pew Research Center, is a nationally representative panel of randomly selected U.S. adults recruited from landline and cellphone random-digit-dial surveys. Panelists participate via monthly self-administered web surveys. Panelists who do not have internet access are provided with a tablet and wireless internet connection. The panel is being managed by Abt SRBI.

Members of the American Trends Panel were recruited from two large, national landline and cellphone random-digit-dial (RDD) surveys conducted in English and Spanish. At the end of each survey, respondents were invited to join the panel. The first group of panelists was recruited from the 2014 Political Polarization and Typology Survey, conducted from Jan. 23 to March 16, 2014. Of the 10,013 adults interviewed, 9,809 were invited to take part in the panel and a total of 5,338 agreed to participate3 The second group of panelists was recruited from the 2015 Survey on Government, conducted from Aug. 27 to Oct. 4, 2015. Of the 6,004 adults interviewed, all were invited to join the panel, and 2,976 agreed to participate.4

The ATP data were weighted in a multistep process that begins with a base weight incorporating the respondents’ original survey selection probability and the fact that in 2014 some panelists were subsampled for invitation to the panel. Next, an adjustment was made for the fact that the propensity to join the panel and remain an active panelist varied across different groups in the sample. The final step in the weighting uses an iterative technique that aligns the sample to population benchmarks on a number of dimensions. Gender, age, education, race, Hispanic origin and region parameters come from the U.S. Census Bureau’s 2014 American Community Survey. The county-level population density parameter (deciles) comes from the 2010 U.S. Decennial Census. The telephone service benchmark comes from the July-December 2015 National Health Interview Survey and is projected to 2016. The volunteerism benchmark comes from the 2013 Current Population Survey Volunteer Supplement. The party affiliation benchmark is the average of the three most recent Pew Research Center general public telephone surveys. The internet access benchmark comes from the 2015 Pew Survey on Government. Respondents who did not previously have internet access are treated as not having internet access for weighting purposes. The frequency of internet use benchmark is an estimate of daily internet use projected to 2016 from the 2013 Current Population Survey Computer and Internet Use Supplement. Sampling errors and statistical tests of significance take into account the effect of weighting. Interviews are conducted in both English and Spanish, but the Hispanic sample in the American Trends Panel is predominantly native born and English speaking. 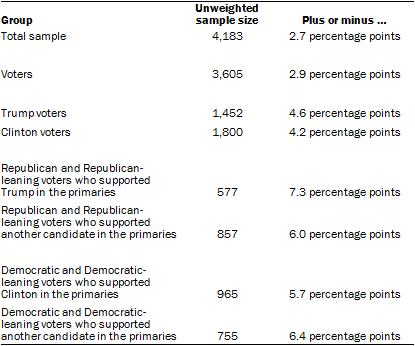 The question about the main source used for election news was a two-part question. Respondents were first asked on which platform they got most of their election news. They were then presented with an open-ended question that asked them to specify the specific source (outlet, program, print source, station, website, app, social networking site) on that platform that they turned to most often for news about the 2016 presidential election.

Researchers grouped these open-ended responses together by brand; for instance “NY Times,” “NYT” and “nytimes.com” would all be counted as indicating that The New York Times was the respondent’s main source. Additionally, local news sources were grouped together by platform into “local newspapers,” “local TV” and “local radio.”

Finally, respondents were asked to look at a list of digital-only news outlets and identify any that they used “regularly” for news about the 2016 election. We began with the list of outlets asked about in our 2014 media polarization study (read more about how those sources were selected here) and selected six digital-native news sites, representing a mixture of aggregators and original news publishers and whose audiences are situated at different points along the ideological spectrum according to past research.

Next: Appendix A: Supplementary tables
← Prev Page
Page1Page2You are reading page3Page4
Next Page →