On Tuesday, May 28, Variety reported that IAC, Barry Diller’s media and internet company, is considering selling Newsweek. It would be the magazine’s second sale within a three-year period that included a merger with The Daily Beast and the decision to cease publishing a print edition. Editor-in-chief Tina Brown confirmed this in a memo on Wednesday, May 29. “Newsweek is a powerful brand,” she wrote, “but its demands have taken attention away from The Daily Beast.”

The news magazine genre in general has faced a difficult time transitioning to the digital space. But for Newsweek, the past few years have been especially tumultuous. Between 2007 and the end of 2009, when the magazine was still owned by the Washington Post Co., Newsweek reduced its total staff by 33%, according to Pew Research analysis of the magazines’ staff boxes. Its revenues plummeted 38% in that three-year period, according to internal Newsweek documents. With these revenue declines, the magazine had an overall loss of $6 million in 2007 (before pension credits), which ballooned to $56 million in 2009. In August 2010, Newsweek was sold to audio industry businessman Sidney Harman for $1, plus the assumption of liabilities.

The losses continued after the sale. In 2010, Newsweek’s internal documents projected a $22 million dollar overall loss for that year, less than half of what it had been the previous year. The next year, 2011, with the merger completed, IAC reported losses of nearly $14 million in its media group, which included Newsweek, The Daily Beast and several other websites.[1]

There were some signs of stabilization in 2012, the last year that Newsweek published a print edition. But that may be mostly an indication of the newsweekly reaching bottom. And the end of the print product in December 2012 will likely further reduce revenue, even if it helps usher the Newsweek brand into a mobile and digital future. Brown still says she expects Newsweek to break even by the fourth quarter of 2013, but executives have been saying that since at least early 2011.

In the magazine industry, a publication’s health is typically measured by two key indicators: circulation (the number of copies sold, either on newsstands or through print or digital replica subscriptions), and sales of advertising copy, known as ad pages. Pew Research analysis of these benchmarks paints a rather grim picture for news magazines in general, but especially for Newsweek.

Newsweek’s overall circulation (single-copy sales and subscriptions together) plunged 50% over the span of 10 years, according to the Alliance for Audited Media: In a longer span, it dropped from 3.2 million in 1992 to 1.5 million in 2012. Time, by comparison, saw a 22% decline in that time period. 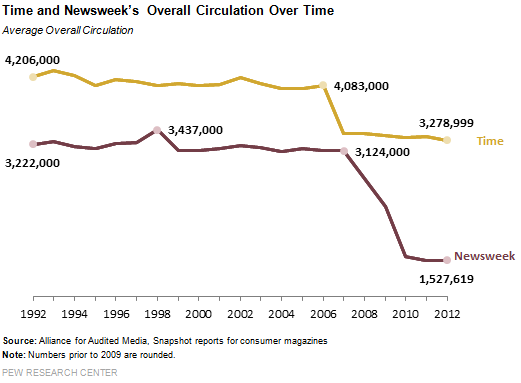 The more niche oriented news magazines fared far better in the last decade, though their overall print audience has been smaller than both Time and Newsweek. The Atlantic and The Week grew the most, with the Atlantic enjoying a 4.7% rise in total circulation to 485,300 copies sold and The Week growing 4.4% to 551,658 copies. (For more read the State of the News Media 2013: News Magazines’ Overall Circulation)

Though single-copy sales make up only a small portion of news magazines’ overall circulation (just 3%, in Newsweek’s case), this indicator is considered a more objective measure than subscriptions of a publication’s health. Here, Newsweek’s biggest plunge occurred from 2008 to 2010, falling 55%. Its single-copy sales fell just 5% in 2012, while other news magazines saw their single-copy sales plummet, including 27% at Time, 17% at The Economist and 18% at The Week. Newsweek’s smaller decline, though, is quickly put in perspective. The magazine sold 57% fewer copies in 2012 than in 2007. (For more read the State of the News Media 2013: News Magazines’ Single-Copy Sales) 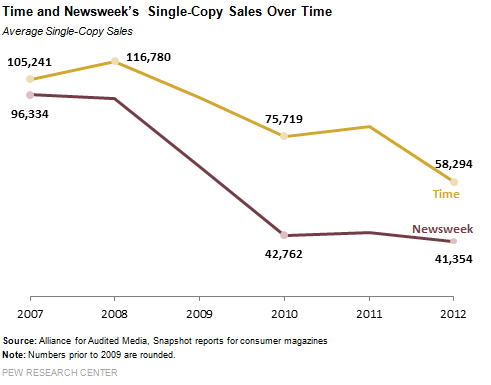 Subscription figures, which many magazines control with heavy discounting, show similar declines for Newsweek. (Subscriptions numbers began including both print-only subscribers and digital replica copies in 2012). Since 2007, the magazine has lost more than 50% of its subscribers-again a much more dramatic decline than among other news magazines. And the transition to digital-only has shrunk that subscriber number further. Newsweek’s 1.5 million print subscribers at the end of 2012 fell to only 470,000 digital subscribers in the first quarter of 2013.[2] 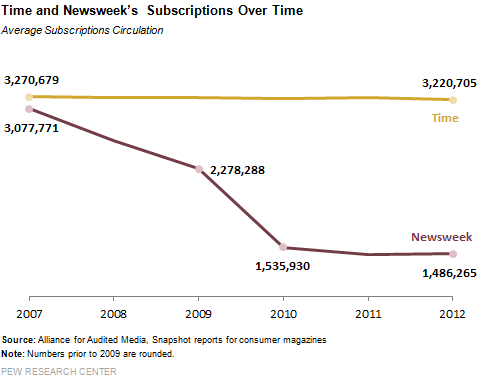 The total web audience for these magazines extends well beyond subscribers to their print or digital titles. Time boasts by far the largest online readership, with an average of 7.7 million unique monthly users in 2012. But, this is one area where the influence of Newsweek’s merge with The Daily Beast has likely helped the title: Its combined audience grew about 50% in 2012, according to Nielsen Netview data. 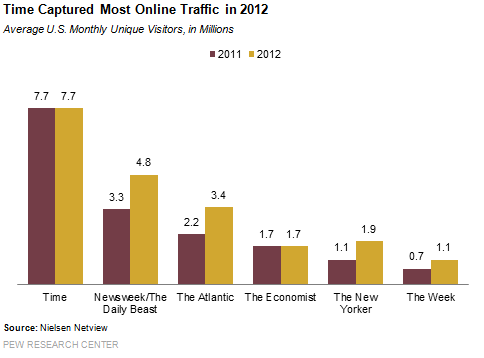 Revenue figures paint a dark picture for Newsweek. From 2002 to 2012, Newsweek’s ad pages – on par with its tumbling circulation – declined 60%, according to Publishers Information Bureau. In its last year in print, 2012, Newsweek saw somewhat better figures. Its ad pages increased 5.5% – the first growth in six years – as advertisers seemed to acknowledge the magazine’s redesign. This occurred as other news magazines suffered declines. Hardest hit was The Week, which suffered a 24.5% drop in ad pages. The Atlantic, The Economist and Time all fell about 12%, while The New Yorker managed to keep its ad page losses in single digits (6%). This slight boost for Newsweek, though, does little to make up for its decade of heavy loss. (For more read the State of the News Media: News Magazines’ Ad Pages) 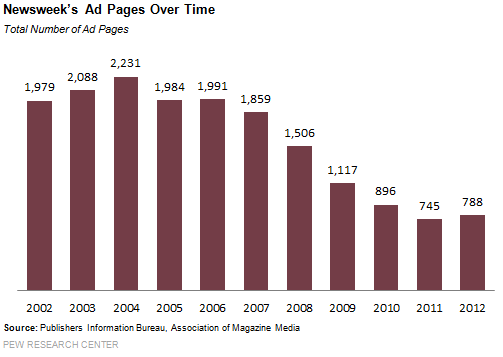 And, while the digital space offers new opportunities for magazine-style reading, it is still far from balancing out the slide in print revenues. Most news magazines do not break out such revenues separately, but industry leaders say the trends mirror those of the broad industry. Investment firm Veronis Suhler Stevenson (VSS) estimates that revenue for news magazines on digital platforms will more than double by 2016, to $2.9 billion. But that money will still bring in a small share of total consumer magazine revenue: VSS projects it will tally just 14.5% of total revenue by 2016, compared to 6.6% in 2012. (For more read the State of the News Media 2013: News Magazines’ Shift to Digital & Mobile) 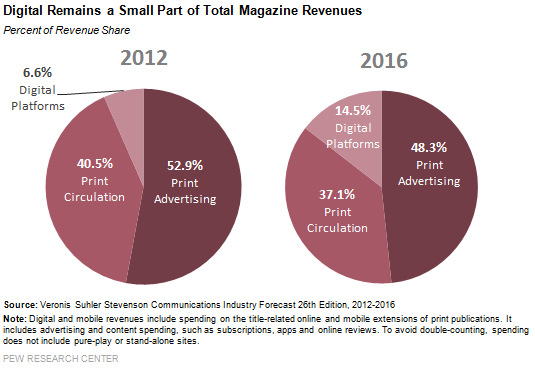 The explosion of tablet and smartphone ownership offers opportunities for news magazines to reengage readers in the digital space. Mobile news consumers, Pew Research surveys have shown, are reading more long-form news content, more stories in one sitting and reading stories they were not necessarily searching for – all very different habits than the quick, search and find tendencies of desktop news consumption. But magazines still have a long way to go to capture a solid portion of that mobile news audience. Just 11% of smartphone owners read magazines on their phone weekly, as do 22% of tablet owners. And revenues, both in digital subscriptions and digital advertising are far from what the print realm was providing. (For more on this topic read the Future of Mobile News and The Tablet Revolution)