For the second straight week, the February 26 shooting death of African American teenager Trayvon Martin by George Zimmerman was a widely discussed topic. From March 26-30, it was the No. 1 topic on Twitter and No. 3 on blogs, according to the New Media Index from the Pew Research Center’s Project for Excellence in Journalism. In addition, a video connected to the ca 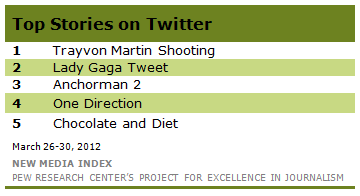 se was the most-viewed news clip on YouTube last week.

On Twitter last week, the largest storylines in the discussion were outrage that no arrest has been made in the case and sympathy for Martin and his family.

On blogs, the racial element of the story was the top theme in the conversation, given Martin’s race and questions that have arisen about the racial attitudes of Zimmerman, a Hispanic man.

The commentary on blogs and Twitter was largely in keeping with the findings of an earlier PEJ study that tracked the response to the controversial case from March 17-28. That report found that calls for justice (21% of the conversation) and sympathy for the victim (19%) were the top themes on Twitter while the racial issue (15%) was the leading topic on blogs.

Many bloggers last week connected the incident to racial profiling and claimed that Martin would not have seemed suspicious to Zimmerman if he were white. They saw this tragedy as evidence of the continued presence of racism and prejudice.

A number of commentators made personal connections, especially African American parents with young boys, who feared that their sons would be profiled in the same manner that they say Martin was.

While in the minority, a few bloggers argued that the racial component was being overblown by African 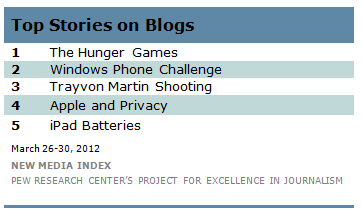 In a much different realm, race also became an issue in reactions to the blockbuster movie The Hunger Games, which made $155 million in its opening weekend-the third biggest opening in Hollywood history. Discussion about the movie, adapted from the popular book of the same name, was the No. 1 subject on blogs last week, and the majority of that conversation revolved around the way certain characters were portrayed in the film.

A few Twitterers expressed dismay at seeing African American actors playing the roles of several prominent characters in the film that they assumed were white after reading the book.

That triggered a large backlash as a number of bloggers pointed out that some of these characters were described as having dark skin in the book while others were not visually described at all. Others ridiculed the assumptions that good characters in the movie had to be white. A few bloggers also connected the racial complaints about the movie with issues surrounding the Martin case.

The large part of the Twitter reaction to the shooting of Trayvon Martin consisted of sympathy for the victim and indignation that no one was arrested for causing his death.

“George Zimmerman makes me sick to my stomach. He needs to be behind bars as soon as possible,” charged Sana Asghar.

“When I hear Trayvon Martin cry out for help then heard the gun shot and silence my heart cried out to God and the family RIP,” wrote Yung Royal.

On blogs, most of those who focused on the racial components of the Martin killing connected it to larger problems facing African Americans.

“Martin died because black boys are suspicious,” posted Big Man at Raving Black Lunatic. “That’s what racism teaches us. Black boys in a neighborhood with white people are a clear sign that something is wrong…Just being black is probable cause. It is an indelible brand that marks you as a deviant.”

“The murder – and I’ve seen no evidence to classify it otherwise – of Trayvon Martin reinforces the very real dangers that black Americans still face,” wrote Stephen Robinson at The Intersection of Madness and Reality.

“I think its time for us to stop band aiding our race related issues, America needs to confront its race and class issues not during election campaign season,” advised Pious Ali at Peaceful Thoughts.*

A number of bloggers, particularly African Americans, related the case to personal experiences and fears.

“It’s cases like this that me and other Black men paranoid as hell,” asserted Langston at Straight Gansterism. “If we innocently walk home through a white neighborhood after a quick skittles run, we could be gunned down by quasi-security.”

“My oldest son is almost 13 and he’s starting to go places with friends and no adults. I worry every day when we send him out of the house. Because he’s sweet & smart & funny, but he’s also black and male,” shared Esoterica.

Some commenters however, took the opposite tack, criticizing those who cited race as a major factor in the Trayvon Martin case.

“There is no evidence whatsoever that race was a defining factor in the tragic death of Trayvon Martin,” wrote David Horowitz at Front Page Mag. “Notwithstanding the absence of evidence, this unhappy incident is now the occasion for school shut-downs, mass marches and public death threats by enraged African Americans…The display of racial outrage over this case is a national disgrace.”

“A very ugly truth is being revealed,” added Moneyrunner at The Virginian. “The black community has at its core a burning hatred of the white community and that core is using this tragedy as an opportunity to show its naked face.”

And some observers thought the attention focused on the Martin case was overshadowing bigger problems.

“But what about all the other young black murder victims?” wondered Fox News political analyst Juan Williams. “Nationally, nearly half of all murder victims are black. And the overwhelming majority of those black people are killed by other black people. Where is the march for them?”

On YouTube last week, another element of the Trayvon Martin case was highlighted as the most-watched news clip featured a member of Congress making a show of solidarity with the victim.

The video consisted of a testy exchange on the floor of the U.S. House of Representatives caught live by C-SPAN on March 28. Rep. Bobby Rush (D-IL) was discussing the Trayvon Martin tragedy and speaking out against racial profiling when he removed his suit jacket to reveal beneath it a gray hooded sweatshirt. He pulled the hood over his head and proceeded to quote passages from the Bible.

Rep. Gregg Harper (R-MS), who was presiding over the House, hammered the gavel and tried to prevent Rush from delivering his remarks. Harper reminded members of House rules that prohibit members from wearing hats on the floor. The Illinois congressman was then escorted off the floor by the House Sergeant at Arms.

The Hunger Games and Race

Several websites, such as Jezebel and Hunger Games Tweets, collected a handful of Twitter messages that expressed disappointment over the casting of African American actors in certain roles in The Hunger Games.

“Awkward moment when Rue is some black girl and not the little blonde innocent girl you picture,” read one.

“why does rue have to be black not gonna lie kinda ruined the movie,” admitted another.

“Kk call me racist but when I found out rue was black her death wasn’t as sad #ihatemyself” read a third.

These tweets, along with a few others, were widely quoted throughout the blogosphere and many of their authors subsequently took them down. And the response from bloggers was harsh.

“As more attentive fans were quick to point out, these reactions were not only ugly but obtuse: The characters are pretty clearly described in the book as having dark brown skin,” described Julian Sanchez. “The deeper stupidity here is the assumption that the default race of any character is Caucasian when it’s not stated explicitly, and that casting a person of color in this case would represent some kind of deviation from the book’s implicit characterization.”

“But what’s more disturbing is a) that people think watching a young black girl die isn’t as sad as watching a young white girl die; b) that people can’t connect with a character just because of her race; c) that saying that on Twitter is okay, especially if you qualify it by saying that you’re ‘not a racist;’ and d) that we live in a culture that validates those beliefs,” wrote Elise Swanson at nextgen Journal.

A few bloggers connected the racial discussion about the movie with the Martin case to make a larger point.

“Both Trayvon and the racist remarks about the casting of Rue are simply reminders that we can’t be content and idle with our society perceives and deals with race,” warned Zoe Kronovet at The Brandeis Hoot. “If people can become so enraged over something as arbitrary as a casting choice in a movie, we have a long way to go before the words ‘racial equality in America’ can ever be uttered truthfully.”

“I lost more faith in the idea that America is close to becoming a race-blind society after reading these tweets then during all of the coverage of George Zimmerman slaying of Trayvon Martin,” declared Emmanuel Felton at policymic. “Will America ever shake off its storied history of race hate?”

Elsewhere on blogs, the attention was focused on consumer gadgets and technology.

The No. 2 subject involved a blog post about frustration directed at the Windows Phone Challenge. As a promotion for Microsoft’s Windows Phone, the company created a contest in which a customer can try to complete any task faster on his or her own smart phone than an employee can using a Windows Phone. Anyone who wins the challenge can get a laptop computer. Technology blogger Sahas Katta described his attempt, which he thought was successful, but was told he did not win for unclear and arbitrary reasons.

The issue of privacy was the fourth-biggest subject as bloggers linked to an article about Apple’s decision to reject apps that access UDIDs, or identification numbers that are unique to each iPhone and iPad.

And news about poor battery life for new Apple iPads was the fifth most-discussed subject.

On Twitter, three of the five top subjects last week were entertainment-focused.

The second subject was a tweet from pop star Lady Gaga showing a smashed piece of birthday cake, which she said symbolized her reservations about turning 26.

News that there would be a sequel to the 2004 comedy film Anchorman starring Will Ferrell was the third most linked-to subject.

Tweets from the British-Irish boy band One Direction were the No. 4 subject while a scientific study suggesting that people who eat chocolate regularly tend to be thinner than those who do not finished fifth.

How Blogs, Twitter and Mainstream Media Have Handled the Trayvon Martin Case