During a week that featured volatility in the stock market, chaos in the Middle East, and an increase in attention paid to the presidential campaign, Google’s $12.5 billion purchase of Motorola drew excitement in social media. 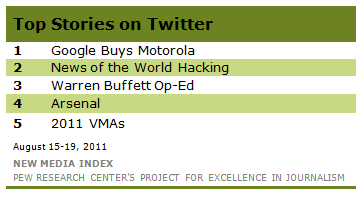 For the week of August 15-19, the sale was the most discussed subject on Twitter and the No. 3 story on blogs, according to the New Media Index from the Pew Research Center’s Project for Excellence in Journalism.

Many Twitter users offered some humor as the passed along news of the deal.

“For those asking, I imagine Steve Jobs rubbing his hands together & thinking “excellent” as he watches the Google-Motorola & HP news,” wrote Danny Sullivan.

On blogs, many sensed a windfall for Google because the company would obtain all of Motorola’s patents for the Android phone devices.

“The Google/Motorola deal, summarized,” tweeted Justin Kozuch. “‘These are the droids we’re looking for.'”

“The plot thickens in ‘News of the World’ phone-hacking scandal,” tweeted Nathan Bense.

And Warren Buffet’s financial philosophy came in at number three. In a New York Times op-ed, Buffett made the case that the super rich should pay higher taxes.

Twitter users were generally enthusiastic about the proposal and full of admiration for the magnate.

“Warren Buffett is like the kid in school who asks the teacher to assign the class more homework,” wrote CBS News’ Mark Knoller.

In fourth place was a story about the Arsenal soccer team, which reached an agreement with Barcelona for its captain Cesc Fabregas, and subsequently appointed best VMA Hip-Hop performance and news that Lady Gaga will be opening the 2011 VMAs.

From rumors about the iPhone 5 to new gizmos on the social media tool Foursquare, four of the top five most popular stories on blogs for the week related in some way to technology. 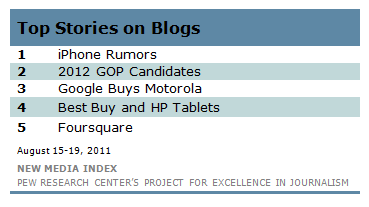 The top story for the week was on the new iPhone, or at least rumors about it. Bloggers were abuzz-albeit cautious of reporting anything as fact-over gossip that Apple would be not holding an iPhone 5 event in early September, despite earlier rumors, and that an iPhone 4G with advanced capabilities was being tested.

“As always, this is all still in the rumor stage, as Apple has not confirmed a single bit of this (or any other iPhone 5 speculation),” wrote Andrew Couts at Digital Trends, “But the rumor mill is quickly ramping into overdrive, and that usually means we’ll have something real to chew on within the next couple of weeks.”

The fourth most linked-to story on blogs was about Best Buy holding onto its delivery of HP TouchPad tablets, selling them for a heavily discounted $99, instead of returning them to the manufacturer. It was revealed earlier in the week that Best Buy had sold less than 10% of its inventory of 270,000 TouchPads before lowering the price. Most of the online response was from tech blogs discussing the discounted price of the TouchPad and what this would mean for Best Buy and HP.

And at No. 5, was the announcement from Foursquare, the social networking tool, of two new gadgets for its app. One allows users to tell the program what events they are attending, as opposed to just locations, and the other allows users to make lists of places and attractions. Tech bloggers mostly restated the facts Foursquare reported, but some voiced reservations about sharing more information with the company.

Only one of the top five stories on blogs for the week was not tech-focused. The second most-linked-to topic for the week was about the 2012 presidential election, and the articles touched on several candidates for the Republican nomination: Rick Perry, Michele Bachmann, Tim Pawlenty and Herman Cain.

One of the most-blogged-about stories was Texas Governor Rick Perry’s suggestion that Federal Reserve Chairman Ben Bernanke was “almost treasonous” when he adopted quantitative easing. The response on blogs was mixed, but both liberals and conservatives showed concern over Perry’s statement.

“So now “treason” has been refined to include doing something in politics someone doesn’t like – not just betraying the country, wrote Joe Gandelman at The Moderate Voice, “And it’s on its way to it being acceptable to use the term that way.”

“Oh, yeah, and Rick Perry is the guy who suggested Texas secede from the union. Nothing treasonous about that,” said Belly Dennis, sarcastically at Tell Peoria.

Another frequently-blogged story was about an op-ed by Michelle Goldberg in The Daily Beast in which she claims that Congresswoman Michele Bachmann and Rick Perry have a Christian plot for domination. Liberal bloggers agreed with the piece and often reposted it, but many conservative bloggers felt that Goldberg’s fears were unfounded.

“There’s absolutely nothing wrong with discussing this movement and educating Americans about its existence. But, tying candidates to its fray without conclusive data, while urging Islamist comparisons seems a bit dangerous and journalistically irresponsible,” wrote Billy Hallowell at Glenn Beck’s The Blaze, “This attempt at tying these candidates to such extremism is premature and the answers to these questions could easily be satisfied by asking the candidates themselves rather than issuing wild postulations.”

Former Governor of Minnesota Tim Pawlenty dropping out of the race also made blogs last week. While the response was mixed, most defended him as an under-appreciated candidate.

Another story was about Godfather’s Pizza owner, Herman Cain quoting Donna Summer lyrics from a 2000 Pokémon movie in campaign speeches and on his official website. Most bloggers made fun of him for repeatedly quoting the lyrics.

Dramatic footage of a stage collapse during a powerful storm at the Indiana State Fair on July 13th dominated YouTube last week. All five of the most-watched videos focused on the accident, which occurred just before a concert from the band Sugarland was set to begin.

The No. 1 and No. 4 videos, uploaded by two different sources, showed the steel scaffolding tumbling forward onto the crowd. One woman could be heard screaming, “Oh my God, oh my God!”

The No. 2 video captured the aftermath of the stage collapse, hundreds of concertgoers at the scene trying to help the injured amid the chaos.

The No. 3 video is a news broadcast from Russia Today with a world update on the stage collapse.

The Blogosphere Worries about Government Propaganda