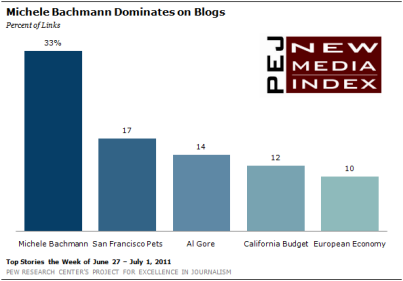 Michele Bachmann, the Tea Party favorite who formally announced her presidential candidacy on June 27, created a major buzz in social media last week, registering as the dominant subject on blogs as well as a hot topic on Twitter. Most of the commentary was highly critical.

From June 26 to July 1, fully one-third (33%) of the news links on blogs were about Bachmann, making her the No. 1 subject, according to the New Media Index from the Pew Research Center’s Project for Excellence in Journalism. And in a rare case of the same subject interesting both bloggers and Tweeters, the Minnesota Congresswoman was the No. 5 story on Twitter.

Bachmann was also a major newsmaker in the mainstream press last week, where much of the coverage discussed her emergence as a significant force in the GOP field. But bloggers and Twitter users eschewed that horserace angle and instead largely criticized her for what they saw as gaffes and hypocrisy.

The two main storylines that grabbed the attention of bloggers were Bachmann receiving government aid despite her condemnation of government handouts and the candidate’s confusion of John Wayne, the actor, with John Wayne Gacy, the serial killer.

Other stories that were popular on blogs for the week included a piece about San Francisco weighing the decision to ban the sale of pets in second place (17%). An article critical of former vice-president Al Gore’s failure to advance the green movement was in third, at 14%.

Wrapping up the top five stories on blogs were two economic topics. The fourth-biggest was about California Democrats passing an austerity budget for the state (12%). The No. 5 story was about austerity measures in financially troubled Greece and public workers on strike in the UK (10%).

The economy in Britain was also one of the top stories on Twitter for the week, in fourth place with 9% of news links.

On Twitter the new Google+ social networking tool took top billing, with 35% of news links for the week. Tweeters were mostly excited about the new Facebook competitor, especially when it came to the issue of privacy.

Other tweets linked to a lengthy Wired article about Google+, and tweeters alerted their followers that it was a hefty piece. 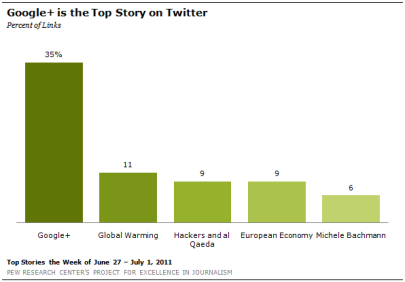 The No. 2 story on Twitter, with 11% of links, was about global warming, all from British publications. The articles included a Guardian story about Prime Minister David Cameron being prodded to end his silence on climate change by a former chief scientific advisor to the government; an Independent article about scientists saying that climate change is undeniably linked to extreme weather; and another Guardian piece on a climate skeptic receiving a million dollars from oil companies.

Most of the Twitter users who responded in this discussion agreed about the real dangers of global warming.

In third place, with 9% of links, were stories about a British government hacking of al Qaeda’s website, replacing bomb instructions with cupcake recipes.

The fourth-biggest topic (9%) was about the British economy, with a government official (Work and Pensions Secretary Iain Duncan Smith) urging Britons to hire unemployed Britons rather than relying on foreign workers.

Coming off a strong debate performance on June 13 and with polls showing her among the GOP frontrunners in Iowa, Michele Bachmann’s candidacy seems to have some momentum behind it.

But social media users were not impressed last week. The majority of the response came from bloggers, many of them liberal, who wrote that she was both hypocritical and gaffe prone.

One of the points of contention was that despite her stated aversion to government handouts, her family personally benefited from both farm subsidies and Medicaid funding. The mental health clinic run by her husband collected Medicaid payments of more than $137,000 since 2005, on top of $24,000 in federal and state funds that the clinic received under a state grant to train employees. In addition, her family farm-in which Michelle is a partner-received almost $260,000 in federal farm subsidies.

“[Michele Bachmann], the Tea Party darling was shown to have suckled at the teat of the government sow,” wrote Diane of Cab Drollery.

“Bachmann possess the horrible quality of not being able to admit when she makes a mistake. I think that arrogance will be her downfall as much as her verbal/mental stumbles,” wrote Rob Kotaska on My Three Percent is Swimming.*

“What we have a problem with is Michele Bachmann constantly dissing Medicaid for adding to the welfare rolls, then finding out some of those Medicaid dollars…end up nipping and tucking and botoxing the quintessential nipped, tucked, botoxed, faux-thirty trophy Legislator who struts onto Fox News and tells Bill O’Reilly, ‘I don’t need government to be successful,'” wrote wonkronk.

“We already know Bachmann isn’t the brightest flower on the Iowa prairie. I say cut her some slack — and save the ammo for the serious candidates,” wrote EJ Perkins at The Portal.

There were some conservatives who weighed in, saying that it was not unreasonable for her to be accepting government aid and that the media was attacking her.

“Accusing Bachmann of confusing Good John with Bad John smacks of a media-driven contrivance. That said, when I saw the images of John Wayne and John Wayne Gacy side by side in the Los Angeles Times today, I couldn’t help but laugh,” wrote Richard Cross at Cross Purposes, “I question whether Bachmann is qualified to be president, but I think this kind of orgiastic feeding frenzy on the part of the media will help her by making her a sympathetic character, if not a martyr, among conservatives.”

On YouTube, a supposed UFO sighting over London drew the most attention last week, generating two of the five most popular news-related videos.

The No. 1 and No. 3 videos are the same footage, bouncy clips showing white lights hovering in the skies over London on May 24, which attracted a small crowd of onlookers.