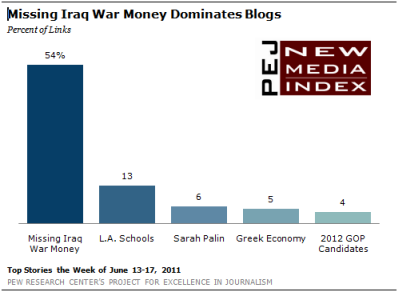 The discovery that billions of dollars intended for Iraq’s post-war reconstruction have gone missing generated a major-and largely partisan-outcry from bloggers last week.

For the week of June 13-17, 54% of the news links on blogs were about the lost Iraq money, more than four times the next biggest subject, according to the New Media Index from the Pew Research Center’s Project for Excellence in Journalism.

The only other time that Iraq has showed up among leading blog topics since the NMI began in January 2009 was the week of September 6-10, 2010. Interestingly, it was the same basic subject, the high cost of the Iraq War that triggered bloggers’ interest then, as they linked to an article that revised upward a previous estimate that the conflict would cost $3 billion.

It seems somewhat ironic that at a time when the debate over U.S. policy is focused on the wars in Afghanistan and Libya, the story that sent bloggers to their keyboards last week was about the missing $6.6 billion in cash sent by cargo plane between March 2003 and May 2004 intended for reconstruction and other projects in Iraq. That revelation got minimal attention in the mainstream press last week, accounting for less than 1% of the newshole according to PEJ’s News Coverage Index.

The Los Angeles Times story reported that this represented the “biggest international cash airlift of all time.” The story added that federal auditors think the cash may have been stolen, leaving the Pentagon embarrassed and Congress not exactly thrilled.

Among bloggers, the emotion was outright anger as liberals seethed over the mismanagement of the money, often blaming the Bush Administration for its handling of the war in Iraq.

“Ah how the ghost of the lawbreaking, illegitimate and incompetent Bush administration continues to haunt this nation!” wrote Mike Villwock at Big Dumb Guy.

The No. 2 subject on blogs, with 13% of news links, had to do with the Los Angeles Unified School district. Bloggers linked to two different stories. One that focused on how the district voted to remove flavored milk from its menus in order to make school food healthier and combat childhood obesity. The other was an op-ed by L.A. Mayor Antonio Villaraigosa on the problems facing L.A. schools and his efforts to improve teacher quality through reform.

In third place, with 6% of links, was a story about the June 10 release of 25,000 of Sarah Palin’s emails from her tenure as Alaska governor. That subject generated commentary from both liberal and conservative bloggers who used the occasion to assail or support the politically polarizing Palin.

The fourth-biggest story (5%) was about violence breaking out in Athens, Greece in response to a package of budget cuts and tax increases.

Next came two stories focused on the Republican candidates in the 2012 presidential election (4%). One was a Los Angeles Times article about the GOP candidates making a rightward shift and the other was a 2008 New York Times op-ed written by Mitt Romney arguing that the U.S. should let Detroit go bankrupt. Bloggers pointed out that Romney recently claimed credit for the auto industry’s turnaround, and his 2008 op-ed disagrees with his assertion.

That marks the second time that bloggers have cited that 2008 op-ed and criticized Romney for hypocrisy in recent weeks. That subject also accounted for 6% of the links the week of May 23-27. 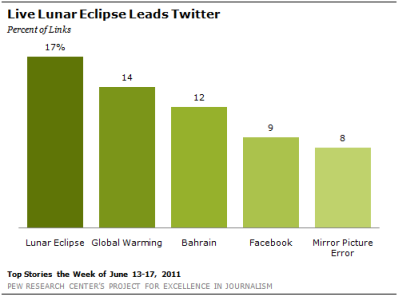 The top two stories on Twitter last week moved away from technology and into the more natural world around us.

At No. 1, with 17% of news links, was a live feed of the lunar eclipse from Wired magazine. (After the eclipse, Wired provided a YouTube video of the event.) Twitter users were excited about the lunar eclipse and how they could view it live online from anywhere in the world-or at least anywhere with an internet connection.

“I love technology… watching the #eclipse taking place now on other side of the world. you can too!” wrote Melissa Morgenweck.

“Are we too techno needy? Why watch online when you can see it live?” asked Richard Lord.*

In second place were several stories about global warming (14%). One was about a British government advisor in charge of overhauling school syllabi in England saying that climate change should not be included in the national curriculum. The other was a letter from scientists saying that climate change is a fact and that they would more actively promote that view in the coming weeks.

The No. 3 subject was continued unrest in Bahrain (12%). That included two stories focused on Ayat a-Gormezi, a jailed poet who has become the symbol of Bahrain’s resistance. Another was about the government of Bahrain saying it has commissioned a UK-based law firm to file a suit against The Independent for its reporting on the crackdown on protests in the country.

Many of the tweets linking to these articles came from within Bahrain and included calls to free the young poet, often with a hash tag: “Free #Ayat NOW!”

In fourth place, with 9% of links, were several articles about Facebook: its’ losing U.S. users, developing an iPad app and prepping for a mobile platform.

And the fifth story on Twitter, with 8% of links, was an article about a double murder suspect who is alleged to have killed his girlfriend and child with a shotgun. The reason it was popular on Twitter, though, is because the Daily Mirror accidentally accompanied the article with a drawing of Superman. (Screen grab credit Tyler B. Peters). Tweeters generally declared this a #fail.

The news of the missing billions sent to Iraq touched a nerve among liberal bloggers last week, many of whom used the occasion to launch broader criticisms of the war itself and the George W. Bush Administration that launched it.

“Yes, the US Govt mislaid 66 Thousand Million dollars, big news…BUT, it gets MUCH WORSE!” wrote Scott Bennett at The Big Wide West, “In addition to the 6.6B USD lost, there’s the estimated 823B USD for which we CAN account. That is the total cost of military operations so far in Iraq.”

“Now the Republicans want Americans to believe they are the party of fiscal responsibility. That idea is more than laughable — it is completely insane,” wrote Ted McLauglin at jobsanger

“I see the Pentagon’s finally admitting what we knew to be true ages ago,” wrote Phoenix Woman at Mercury Rising, “I wonder how much went for black ops, how much went for brides, and how much simply went into the back pockets of the young College Republican and AEI sheltered-workshop kiddie types Paul Bremer picked to run the Coalition Provisional Authority?”

“Here’s a thought: the next time you hear some Republican carrying on about waste, fraud, and abuse in the government, ask them about the missing $6 billion that the Bush administration airlifted to Baghdad without getting a receipt,” wrote Mustang Bobby at Bark Bark Woof Woof.

“This is something I’ve said from the beginning would happen,” wrote Kansas Mediocrity, “This truly is a repeat of what happened in VietNam…Whenever we send money overseas to further our interests, especially in open war, it will always end up in the hands of the people we supposedly are fighting. That’s just the way it works.”

“Glad I am not a US tax payer,” noted Alex, a Londoner, at The Financial Crimes.

At least one blogger commented on what he cited as misguided media priorities.

“Missing Iraq money may have been stolen,” wrote Red Eye, “but that’s OK, destroying Anthony Weiners marriage and career is more important to the American people who don’t have jobs and are about to lose their homes, praying they don’t get sick because they don’t have health insurance because they have no jobs.”

On YouTube, a news video that highlighted both the power and unintended consequences of social media drew the most attention last week.

The video, from the Polish television channel Polsat, featured the fallout from a 16 year-old girl’s Facebook gaffe in Hamburg, Germany.

About 1,600 Facebook users crowded the streets of her Hamburg neighborhood on June 3 after the 16-year old, Thessa, accidentally made her birthday party invitation public on the social networking site. The police in Hamburg intervened by blockading the house and clearing the “guests” from the area.

Afghanistan and a Charge of Racism Lead the Blogs