One thing was clear last week, the first time that the 2012 presidential race generated significant coverage. Donald Trump has emerged as the early winner of the media primary—at least in terms of coverage and ability to drive the news agenda. 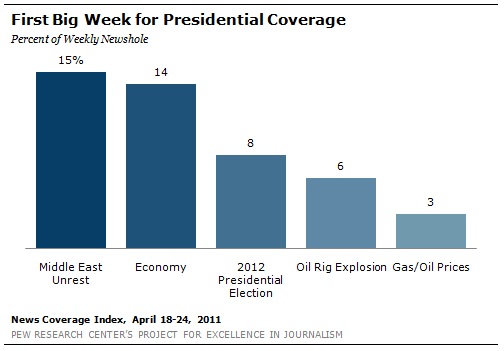 For much of this year, the looming presidential race has been simmering only in the background of the news. That is in sharp contrast to 2007, when the race to succeed George Bush was already a major story at this point in the year. But now, at least for the moment, things have changed.

For the week of April 18-24, the 2012 presidential race emerged as a big story, more than doubling its previous high water mark this year. It accounted for 8% of the newshole studied by the Pew Research Center’s Project for Excellence in Journalism, making it the third-biggest story in the news last week. And a closely related story (at 3%) involved attention to Obama himself, with a particular focus on the “birther” movement that questions whether the president was born in the U.S.

In both cases, that was due in large part to the attention garnered by real estate developer, reality TV star and now possible presidential candidate Trump—who has embraced the birther issue and become the rising star of the GOP presidential field.

Indeed, Trump was the week’s second leading newsmaker behind Obama, registering as a dominant figure in 4% of all the week’s stories. That is six times more attention than the next most-covered potential GOP contender, Sarah Palin, generated last week.

The week’s No. 1 story, at 15%, was the continued unrest and violence in the Mideast, primarily in Libya. Coverage was up from 10% the previous week, fueled by several significant developments in the Libyan war including the deaths of two journalists and a modification of the U.S. military role with the introduction of Predator drone strikes.

Coverage of the economy, 14%, was once again driven by concern about the government’s financial health, which included an ominous warning from the ratings agency Standard & Poor’s. After two weeks atop the news agenda, economic-related coverage plunged dramatically from the previous week (39%), when Obama rolled out his deficit plan.

A story with a direct impact on the economy, the continued rise of gas prices, was the No. 5 subject (3% of the newshole) as the average cost per gallon at the pump reached $3.85.

April 20 also marked one year since the BP Deepwater Horizon rig exploded and triggered a massive environmental disaster. Last week, coverage of that anniversary was the fourth-biggest story, at 6% of the newshole. And some of the media updates on the situation were not very rosy.

For a number of reasons, including that fact that there is an incumbent seeking re-election, coverage of the 2012 presidential campaign has gotten off to a slower start than the 2008 race. (So far this year, it has accounted for only 2% of the newshole compared with 7% at the same point four years ago.)

But that began to change last week as the race took root in the cable news sector, which is most attuned to politics and partisan controversy. (The campaign was the No. 1 story in cable last week, filling 19% of the airtime studied. In stark contrast, it accounted for only 2% of the front-page newspaper coverage examined by PEJ.)

There were several news-making developments last week, including the entry of long shot libertarian-leaning Gary Johnson, the former governor of New Mexico, into the Republican race. And there was a drop in Obama’s approval ratings that got some attention.

But the real attraction was Trump, who has jumped to the top of some GOP polls with a campaign that has thus far focused on Obama’s birthplace and blunt talk about getting tough with China and seizing Middle Eastern oil fields. If Trump’s sweeping policy positions and birther mantra are raising eyebrows about his seriousness as a candidate, the media last week seemed primarily respectful of his ability to so quickly inject himself into the race.

On ABC’s April 18 newscast, anchor Diane Sawyer discussed “the insurgent presidential rumbling from Donald Trump” and cited a poll showing him leading the Republican field with 26% support. In the same report, Good Morning America anchor George Stephanopoulos previewed an interview with Trump in which he advocated seizing Iraqi oil fields by force.

“In the old days…when you had a war, to the victor belongs the spoils,” Trump asserted. “You go in, you win the war and you take it.”

Two nights later, conservative Fox News host Bill O’Reilly described Trump as “a smart guy, he’s an impatient man, and he doesn’t much care what anybody thinks about him…In the primary debates, Donald Trump would steal the show and little would be off the table.” At the same time, O’Reilly opined that “a Trump candidacy would help Barack Obama because it would divide the Republican Party. That is, unless Mr. Trump wins the primary battle. Then Mr. Obama might have a huge problem.”

Another 3% of last week’s coverage was devoted to the president and his administration, and the birther issue took center stage. In Arizona, Republican Governor Jan Brewer vetoed a bill that would have, among other things, forced presidential candidates to produce a birth certificate or other pieces of evidence to qualify for the state’s ballot. Another GOP governor, Louisiana’s Bobby Jindal, said he would sign a similar bill in his state.

While many media analyses indicate that Republicans could be hurt with independent voters if they are too closely identified with birther claims, it is Trump who is seen as having revived the issue in the campaign. The claim that Obama was not born in the U.S. has been refuted by the president’s Certificate of Live Birth document and the fact that Honolulu’s major newspapers carried announcements of Obama’s birth in August 1961. Last week, potential GOP presidential hopeful Michelle Bachmann—who had previously suggested that candidates should produce their birth certificates—appeared to agree that Obama was U.S.-born after ABC’s George Stephanopoulos showed her his Certificate of Live Birth.

On April 18, Chris Matthews, one of the hosts in MSNBC’s liberal prime-time lineup, took Trump to task for just that. Trump is accusing Obama of being a “fraud from day one,” Matthews said. “He says nobody knew him at school, like he was some impostor and never went to those schools.  He said he never really got into the schools in the Ivy League he got into… He says the guy is a confection, a nonexistent figure.  He’s suggesting that Barack Obama doesn‘t really exist as we know him.”

The turmoil in the Middle East had something of a comeback in the media last week. The story registered its highest level of coverage in three weeks. It generated the most attention, 23%, in the online news sector, which week after week is usually more internationally oriented than any other part of the media culture in its agenda.

Several major events drove the coverage in Libya, including the deaths of Western photojournalists Tim Hetherington and Chris Hondros, who were killed in the battle-torn Libyan city of Misrata. The introduction of Predator drone strikes—targeted at troops loyal to Muammar Gaddafi—also made news as did a visit to Libya by Senator John McCain, who, according to an Associated Press account, described the Libyan rebels as “my heroes.”

With a significant uptick in violence last week as Syrian security forces reportedly killed scores of anti-government protestors, that nation’s crisis accounted for the bulk of last week’s Mideast coverage that was not devoted to Libya.

Even as coverage plunged last week, the U.S. economy was still the No. 1 story in two sectors—newspapers (17%) and radio (19%). And more than half the economic coverage was about the debt and deficit, including the news that President Obama and Republican Congressman Paul Ryan—who have unveiled competing and very different proposals—took to the road last week to sell their plans.

One significant piece of worrisome news was this warning about U.S. debt. “On Monday, the ratings firm Standard & Poor’s lowered its outlook on the United States rating to negative. Although the agency did not actually lower its highest AAA rating on the country’s debt, it was the first time since [it] started assigning outlooks in 1989 that the country was given an outlook that was something other than stable,” a New York Times story reported April 19.

Spiking gas prices captured the media’s attention as well last week as some reports suggested the pain at the pump was having an impact on Obama’s political fortunes—something the president acknowledged at a fundraiser.

“Imagine intersecting lines on a chart: gasoline prices going up, presidential approval ratings going down,” noted a Christian Science Monitor story on April 23. “It’s a reality for Obama, and he knows it.”

In the spring and early summer of 2010, the Gulf of Mexico oil spill was easily the dominant story in the U.S. mainstream media, accounting for 22% of the newshole in the first 100 days after the April 20 accident. (The U.S. economy was next, well back at 12%).

Last week’s coverage of the anniversary was relatively modest (6%). The subject generated the most attention in the newspaper section (10% of front-page news.) On CNN—the cable channel that devoted the most coverage to the story last year—last week’s progress report, so to speak, was not particularly comforting.

“Some beaches are suffering from chronic re-oiling, that’s oil that washes back onto the shore,” said anchor/correspondent Soledad O’Brien. “And many Gulf businesses are still feeling it…So far, BP has paid out $4 billion of that $20 billion pledged [to aid Gulf residents]. But…there are plenty of complaints about no payments, slow payments, or as in [one] woman’s case, low payments, only 10 percent of what she says she’s due.” 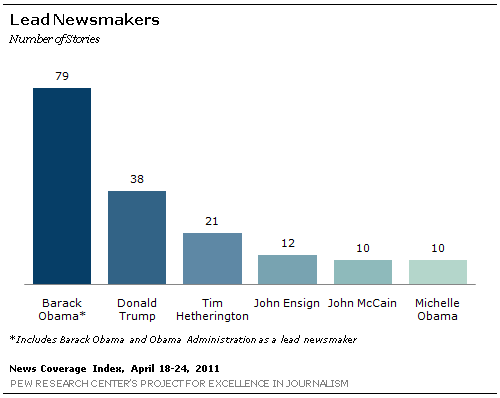 From April 18-24, Barack Obama was the leading figure in the news, registering as a dominant newsmaker in 8% of the week’s stories. That is, however, down significantly from the previous week (13%) when the president’s deficit reduction plan drove much of the narrative. (To be considered a dominant newsmaker, someone must be featured in at least 50% of a story.)

Donald Trump was the No. 2 newsmaker, at 4%, followed by slain photojournalist Tim Hetherington (2%), who also co-directed Restrepo, the Oscar-nominated documentary about the Afghanistan war.

The fourth-leading newsmaker, at 1%, was scandal-plagued Senator John Ensign (R-NV), who announced he was resigning his seat last week. Close behind him, also at 1%, were Senator John McCain, who generated coverage for his visit to Libya and Michelle Obama. The First Lady made headlines after it was revealed that a plane she was traveling in came closer than it should have to a military jet.