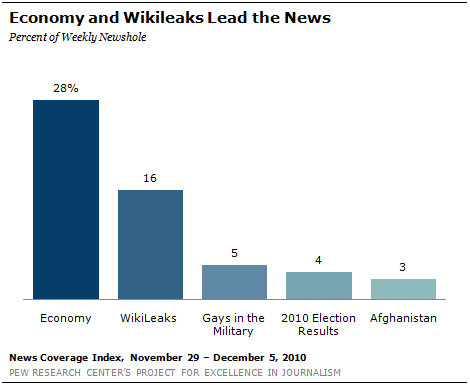 topics dominated the news agenda last week. Attention to the economy reached its highest level in 20 months and a major document dump cemented WikiLeaks’ status as a significant newsmaker.

From November 29 to December 5, the economy accounted for 28% of the newshole studied, according to the Pew Research Center’s Project for Excellence in Journalism. That represents the most coverage devoted to the subject since the week of March 23-29, 2009 (43%), shortly after Barack Obama became president when Treasury Secretary Tim Geithner unveiled his plan to clean up “toxic assets” in banks.

Three events drove last week’s economic coverage—negotiations over the fate of the expiring Bush-era tax cuts, the debt commission vote on its proposal to reduce the deficit and a surprisingly gloomy jobs report late in the week.

The release of thousands of State Department cables by the WikiLeaks site was the No. 2 story of the week, filling 16% of the newshole in PEJ’s News Interest Index, which includes the front pages of newspapers, a sampling of cable news, talk and news radio, the top stories on news websites, and morning and evening broadcast news programs. This marks the third time since the summer that WikiLeaks’ dissemination of classified documents has been a top five story. (Information about the Afghanistan war accounted for 13% of the newshole from July 26-August 1 and material pertaining to the Iraq conflict filled 2% of the newshole from October 18-24.)

Last week’s WikiLeaks saga included two key components. One was the reaction to the released material and its potential impact on U.S. diplomacy. Another was an intensified focus on the site’s founder Julian Assange, who was called a “high tech terrorist” by one American politician and found himself the target of an Interpol search in connection with a sexual assault case.

Attracting significantly less attention, the third biggest story of the week (5%) was the continuing debate over repeal of the military’s “Don’t Ask, Don’t Tell” policy for gay servicemen and women. Coverage was driven by the release of a Pentagon report surveying military personnel about the issue and Capitol Hill hearings on the subject.

That was followed by the continuing fallout from the 2010 midterm elections, which made up 4% of the newshole studied. Some of the commentary focused on the agenda for the newly strengthened Republican Party. And Afghanistan was the No. 5 story of the week (3%), which included coverage of an attack that killed six Americans and President Obama’s surprise visit to the country on December 3.

With the election season over, the economy has quickly re-emerged at the top of the news agenda. Last week, the subject swept the board, finishing as the top story in all five media sectors studied and generating the most attention (36% of the airtime studied) in radio news.

The leading element of the week’s economic coverage, accounting for more than one-third of it, focused on continued maneuvering over the Bush-era tax cuts, with Democrats pushing to raise taxes for wealthier Americans and Republicans advocating for continuing cuts across the board.

With the GOP vowing not to pass any other legislation during the “lame duck” session until a tax deal is reached, the prospects for some kind of White House compromise seemed to grow. Reporting on the December 1 Today show, NBC’s Chuck Todd declared that reaching agreement is “not going to be easy,” but he then sketched its outlines. “Privately, White House aides acknowledge some sort of temporary extension [of the cuts] for everybody will be the compromise,” he added. “The question is how to get all Democrats on the same page.” 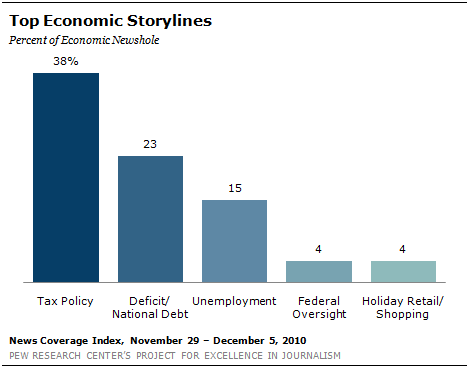 The next leading storyline revolved around two developments on the deficit reduction front. One was President Obama’s proposed freeze of federal workers’ salaries. The other was the debt commission’s vote on its blueprint for cutting into the deficit, which produced a majority of members in support, but not enough backing to bring the plan before Congress.

“The sweeping plan…got eleven ‘yes’ and seven ‘no’ votes,” reported Fox News correspondent Jim Angle on December 3. “That’s short of the fourteen that would have ensured an up and down vote in Congress.” But the story also noted that a majority of the commission members approved the plan and several members expressed confidence that their work would serve to stimulate meaningful action on the deficit.

“Both the ‘yes’ and ‘no’ votes agree the nation has to do something to avoid a serious financial crisis,” Angle added.

And by week’s end, a disappointing jobs report, which showed the unemployment rate moving up to 9.8% from 9.6%, attracted attention.

“In a significant setback to the recovery and market expectations, the United States economy added just 39,000 jobs in November, and the unemployment rate rose to 9.8 percent, the Department of Labor reported Friday,” the New York Times reported. “November’s numbers were far below the consensus forecast of close to 150,000 jobs added and an unemployment rate of 9.6 percent.”

If some media outlets wrestled with the question of whether to publish diplomatically sensitive messages last week—New York Times executive editor Bill Keller acknowledged that “this exercise has had its challenges”—the WikiLeaks release ultimately generated major coverage.

Just as the economy was the top story in all five media sectors last week, the WikiLeaks saga was the No. 2 story in each sector, generating the most attention (18% of the newshole) in cable news.

Initially, the coverage focused on how damaging the leaks might be. On the November 29 CBS newscast, for instance, correspondent David Martin said the disclosure—which included revelations about contingency planning for a North Korean economic implosion, horse trading with other countries over Guantanamo Bay prisoners, suspected arms shipments to Iran and embarrassing evaluations of some foreign leaders—“has left the U.S. mortified that it could not protect its secrets.”

On CNN the same day, correspondent Jill Dougherty reported on the State Department view that the leaks could be “very, very damaging.” But CNN commentator David Gergen took a somewhat more sanguine view, declaring that “there’s no scandal here. There’s nothing here in which we find that the U.S. government has been lying to us as a people.”

Later in the week, the spotlighted shifted to WikiLeaks founder Julian Assange, who was the subject of a Saturday Night Live parody and plenty of calls for his arrest on espionage charges. The Department of Justice said it was investigating WikiLeaks and on Meet the Press, Senator Minority Leader Mitch McConnell referred to Assange as a “high tech terrorist.”

In a more favorable assessment on NPR’s All Things Considered, Raffi Khatchadourian, who had profiled Assange in the New Yorker magazine, offered that “Julian’s political beliefs aren’t necessarily easily categorized as left or right. One insight that became clear to me is that, you know, kind of the defining human struggle for him is between individual and institution.”

Part of the story last week involved another kind of legal trouble for Assange. As MSNBC anchor Tamron Hall reported on December 1: “An international manhunt is underway right now for WikiLeaks founder Julian Assange…on suspicion of rape and molestation in Sweden, something he denies.” As the manhunt intensified, a New York Daily News twitter feed asserted that Assange was actually seen “bar hopping in Lower Manhattan with a shaved head”—a report that strained credulity.

Indeed for the week, Assange was the No. 2 overall newsmaker, trailing only President Obama.

The third-biggest story from November 29-December 5 was the debate over the military’s “Don’t Ask, Don’t Tell” policy. That coverage was fueled by the release of a Pentagon report revealing, among other things, that 70% of the military personnel respondents surveyed said gay troops would not have a negative impact on the armed forces. The story generated the most attention (11%), on cable news.

The No. 4 story, at 4%, was the aftermath of the November 2 midterm elections, which included coverage of Obama’s November 30 meeting with Congressional leaders of both parties and plenty of advice from pundits about how both sides of the aisle should exercise power in the wake of the election.

Rounding out the top five stories was Afghanistan, at 3% of the newshole. Battlefield casualties and a presidential visit fueled the attention to a war that generates ongoing coverage, but usually at a modest level. 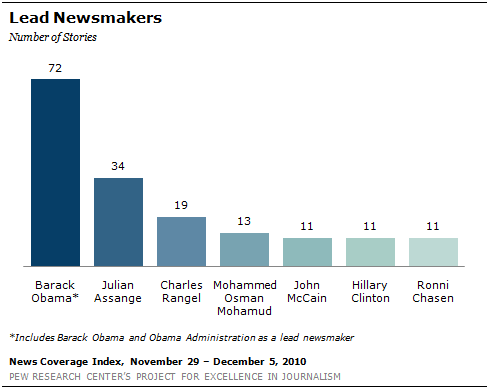 From November 29-December 5, Barack Obama was the top headline generator, registering as a lead newsmaker in 7% of all the stories. (To be a lead newsmaker, someone must be featured in at least 50% of a story.) He was followed in the No. 2 slot by WikiLeaks’ Julian Assange (3%).

New York Congressman Charles Rangel, who was censured for ethics violations on December 2, was the third-biggest newsmaker, at 2%. Rangel became the first member of that body to be censured since 1983.

Mohamed Osman Mohamud, the 19-year-old arrested in connection with a plot to detonate explosives at a Portland Oregon Christmas tree lighting ceremony, was the No. 4 newsmaker, at 1%.

Three people tied for the No. 5 newsmaker spot, all at 1%. One was Arizona Senator John McCain, who has emerged as one of the leading opponents of a repeal of “Don’t Ask, Don’t Tell.” Another was Secretary of State Hillary Clinton, who was busy trying to smooth over some of the feathers ruffled by the WikiLeaks release.

The list also includes Ronni Chasen, the Hollywood publicity agent who was mysteriously murdered in her car on November 16. That story got more attention last week when Harold Smith, identified as a person of interest in the killing, committed suicide on December 1.  Subsequent reports have indicated that authorities now think Smith may not have been involved.

A Washington Standoff and a London Scandal Lead the News