The 2010 midterms dominated the news agenda for the second week in a row and seemed poised to emerge as the major mainstream media story of the fall season.

From September 20-26, the elections accounted for 25% of the newshole, according to the Pew Research Center’s Project for Excellence in Journalism. That is down modestly from the previous week (30%), when Christine O’Donnell’s September 14 upset win in Delaware’s GOP Senate primary drove the narrative.

That was still almost twice as much coverage as the next biggest story, the economy (13%). The significant political narratives of the week included continuing coverage of the tea party’s influence and the Republicans’ unveiling their Pledge to America policy blueprint.

The midterm elections are unlikely to approach the kind of sustained attention paid to the last presidential race—which filled a whopping 36% of the newshole in 2008. But with their potential to switch party majorities in the House, and possibly even the Senate, they have been the top story for the last two months (edging out the economy 14% to 12%) and are likely to generate more attention in the countdown to the Nov. 2 balloting.

The subject on which the outcome of the midterms may well pivot, the troubled U.S. economy, was the No. 2 story last week. One of the significant events was the news that the recession was officially over—and had indeed ended in June 2009. But that report had to compete with a widely disseminated video of an Obama supporter who, addressing the president at an economy-oriented town hall meeting, declared, “I’m exhausted… defending you.”

The No. 3 story, at 4%, was the Senate’s blocking last week of a measure that would have repealed the current “Don’t Ask, Don’t Tell” policy regarding gay men and women serving in the military.

The fourth-biggest story of the week was the education system (3%), but that was propelled largely by Facebook founder Mark Zuckerberg’s $100 million gift to the Newark New Jersey public school system. This marked that second week in a row that education, a subject that does not often generate much mainstream media coverage, made the roster of top-five stories. The week before it was the No. 3 story at 3%, with coverage including a mix of educational issues.

Finally, the No. 5 subject story, also at 3%, was the war in Afghanistan where the major news was the death of nine U.S. troops in a helicopter crash. Another story related to the war—the release of Bob Woodward’s new book reporting on deep divides within the Obama Administration over Afghan policy—accounted for an additional 3% of the coverage.

The elections ranked as the No. 1 story last week in four of the five media sectors, generating the most attention in radio news (39%) and cable news (35%). Indeed, on the ideological talk shows on radio and cable, the subject consumed 51% of the airtime studied by PEJ last week.

One of the major campaign storylines last week was the impact of the tea party, a subject that moved to the center of the news agenda after tea party-backed Christine O’Donnell stunned veteran Congressman Mike Castle, a moderate, in Delaware’s GOP primary.

In the wake of that race, a September 20 Washington Post story asserted that for “a handful of Republican Senators, the wo 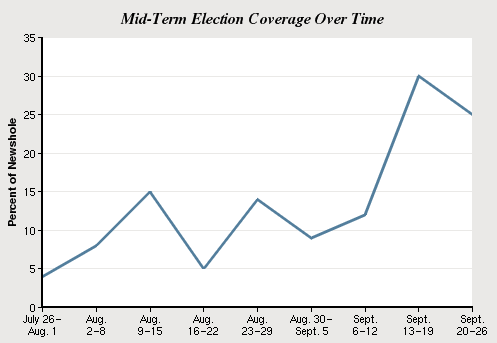 rrying has only just begun as they contemplate the possibility of serious primary challenges from tea party-backed candidates in 2012.” That list included incumbent Republican Senators Olympia Snowe of Maine, Utah’s Orrin Hatch, Indiana’s Richard Lugar and Massachusetts’ Senator Scott Brown, the last of whom was elected in 2010 with tea party support.

O’Donnell herself continued to be a lightning rod for coverage, too, even as she said she would no longer talk to the national press. Some of that publicity last week focused on an 11-year-old clip from Bill Maher’s “Politically Incorrect” show in which O’Donnell stated that “I dabbled into witchcraft.” A CBS news story that discussed that comment couldn’t resist mixing politics with puns, reporting that the “witchcraft comments may have spooked some Republican leaders.”

Indeed, for the second week in a row, O’Donnell dominated election news, appearing as a lead newsmaker in one-fifth (20%) of the midterm stories studied last week. To register as a lead newsmaker, a figure must be featured in at least 50% of a story.

House Republicans also made news by releasing their Pledge to America plan should they regain leadership of that body—one that includes such goals as cuts in government spending, extending tax cuts and a repeal of the new health care law.

The document generally received tepid reviews. On Anderson Cooper’s September 23 CNN show, as an example, it was criticized by pundits from both the left and right. Democratic consultant Paul Begala said “this looks much more like an elite Washington lobbyist deal” while conservative commentator Erick Erickson declared: “It’s very disappointing. I kind of prefer to be the ‘party of no’ than the ‘party of pretty much anything goes as long as we don’t give you specifics.’”The

At 13% of the newshole from September 20 to 26, coverage of the economy fell slightly from 16% the previous week. And it was the No. 1 story online (at 15%). It also filled 15% of the coverage studied on newspaper front pages, where it was the second-biggest story of the week.

Some of the coverage last week included the Senate Democrats’ decision to postpone any decision on extending former President George W. Bush’s tax cuts until after the election.

Another storyline highlighted a milestone of sorts that may not have brought relief to Americans still feeling the impact of a rocky economy.

“The recession officially ended in June 2009, according to the Business Cycle Dating Committee of the National Bureau of Economic Research, the official arbiter of such dates,” stated a New York Times report. “As many economists had expected, this official end date makes the most recent downturn the longest since World War II. This recent recession, having begun in December 2007, lasted 18 months.”

But the formal end of the recession may have been overshadowed by the comments of Velma Hart, an African American woman and Obama supporter who spoke candidly to the president at a town hall meeting on the economy.

“I’m one of your middle-class Americans,” declared Hart, who said she was “exhausted” from defending Obama and his administration and “deeply disappointed with where we are now.”

That clip soon went viral and reverberated throughout the media landscape, with some commentators and political opponents citing it as an example of growing disillusionment with the president, even from his backers.

There was a substantial drop in coverage last week from the economy to the No. 3 story, the debate over gays in the military, which filled 4% of the newshole. The narrative was driven by the failure to break a Republican-led filibuster by those seeking to overturn the “Don’t Ask, Don’t Tell” policy—putting at least a temporary halt to efforts to allow openly gay people to serve in the military. The story got the most coverage in cable news, (7%), not surprising given its resonance as a hot-button cultural issue.

The No. 4 story was education (3%), with Facebook founder Zuckerberg’s big donation to the Newark schools—announced on Oprah Winfrey’s show—fueling the coverage. At least some of the coverage raised the possibility of a connection between the generous gift and the looming release of a new movie, “The Social Network,” that depicts Zuckerberg in some unflattering ways.

The fifth-biggest story, 3%, was the Afghanistan war, where the deadly helicopter incident generated significant attention. And that conflict was closely connected to coverage (another 3%) of the new Woodward book “Obama’s Wars, which depicts an internal policy struggle over Afghanistan strategy.

“Most of the book centers on the strategy review, and the dissension, distrust and infighting that consumed Obama’s national security team as it was locked in a fierce and emotional struggle over the direction, goals, timetable, troop levels and the chances of success for a war that is almost certain to be one of the defining events of this presidency,” stated a Washington Post story.

The White House response to the book included the assertion that the policy debates detailed in its pages were already quite well known to the public. 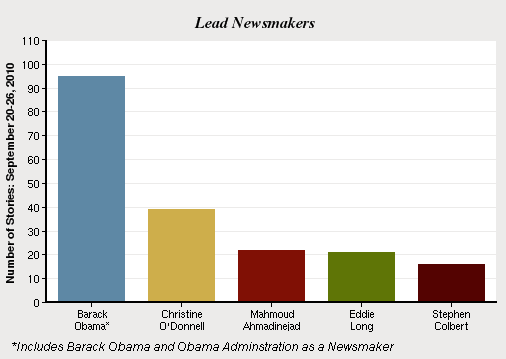 Delaware’s surprise Republican Senate candidate, Christine O’Donnell, was next at 4% of all stories studied, a significant amount of coverage, but a decrease from the previous week when she registered in 7% of them.

Next, at 2%, was Iran’s President Mahmoud Ahmadinejad who last week addressed the United Nations General Assembly. He was followed (also at 2%) by Eddie Long, the Atlanta mega-church pastor who was accused of having improper sexual relationships with several male teenagers.

The week’s fifth-leading newsmaker was Comedy Central host Stephen Colbert (2%), who last week testified at an immigration hearing on Capitol Hill about the lives of undocumented farm workers. Colbert—who stayed in comedic character for much of his testimony—generated controversy and some negative reviews from members on both sides of the aisle.