Driven by some key primary fights in Georgia and Colorado, continuing signs of disarray among the Democrats and more evidence of an angry public mood, coverage of the 2010 midterm elections led the news last week.

From August 9-15, the elections accounted for 15% of the newshole, according to the Pew Research Center’s Project for Excellence in Journalism.  In the past month, the midterms have accounted for 8% of the overall coverage, trailing only the economy (13%) and the oil spill (10%).

Last week’s coverage may have foreshadowed a changing of the guard in the news agenda. With Labor Day—traditionally considered the kickoff of the serious campaign season—looming, attention to the midterm elections is likely to continue to grow. And last week, the story that had dominated the spring and early summer, the Gulf oil disaster, plunged to 3% of the newshole. That represents its lowest level since the April 20 rig explosion and is a sign that coverage may have finally run its course—barring further surprises.

Last week’s No. 2 story was the economy, which continues to generate a sustained level of substantial coverage.  With discouraging news about the state of the recovery and the passage of a bill to save teaching jobs, the story filled 12% of the newshole, the same level as the previous week.

There was a significant drop-off to the No. 3 story (5% of the newshole), the death of former Alaska Senator Ted Stevens in the crash of a small plane. In many of the obituaries, Stevens was remembered for his ability to bring federal largesse to his state—something looked on less kindly in the current economic and political environment.

The week’s fourth-biggest story (4%) was the debate over immigration policy. The news making events included talk by some conservatives about repealing the 14th Amendment that bestows citizenship on anyone born in the U.S. and President Obama’s signing of a bill sending more law enforcement personnel to the Mexican border.

The No. 5 story, at 3%, was the diminishing oil spill story, down from 11% the week before.  That marked the first time since the crisis began in late April that saga had not been among the top three topics in a given week. What news there was focused on a storm that delayed efforts to finish drilling a relief well, the final step chapter in stopping the leak.

The March to the Midterms

The midterm elections were the No. 1 story last week in three different media sectors. The two sectors with ideological talk shows—radio and cable—led the group (25% and 18% of the airtime studied, respectively). But the elections also accounted for 13% of the front-page newspaper coverage.

Last week’s coverage was driven in part by what analysts saw as important primary results. One was the victory of incumbent Senator Michael Bennet over Andrew Romanoff in a hotly contested Colorado Democratic race—a result portrayed as a boon to Obama, who had endorsed Bennet.

The White House was “savoring one of [its] sweetest victories of the midterm election season, as Senator Michael Bennet’s triumph in the Colorado Democratic primary on Tuesday interrupted the political storyline that all incumbents are doomed by voter discontent,” declared a New York Times story. “So Mr. Bennet’s success in Tuesday’s primary belongs not only to him, but also to Mr. Obama and the power of his brand—at least among Democrats.”

Some of the week’s coverage assessed looming general election prospects. During an August 12 story on Good Morning America, anchor George Stephanopoulos noted that it’s been “a rough and tumble week for Democrats.” The accompanying report focused on Congressman Charles Rangel’s “high profile [ethics] scandal” and White House press secretary Robert Gibbs’ criticism of ‘the professional left” for not being sufficiently supportive of the president.

And while a good chunk of the recent media narrative has focused on the likelihood it will be a bad, perhaps even disastrous, election cycle for Democrats, last week brought a warning that neither party is exactly home free.

The Wall Street Journal’s reporting on a new poll revealed that, “Nearly two-thirds of Americans believe the economy has yet to hit bottom…The sour national mood appears all-encompassing and is dragging down ratings for the GOP too…Just 24% express positive feelings about the Republican Party, a new low in the 21-year history of the Journal’s survey. Democrats are only slightly more popular, but also near an all-time low.”

While the biggest spikes in 2010 midterm coverage have so far occurred in weeks with noteworthy primary results, the general election narrative is intensifying as well. This story may well continue to build as the countdown to Election Day grows shorter.

More Bad News on the Economy 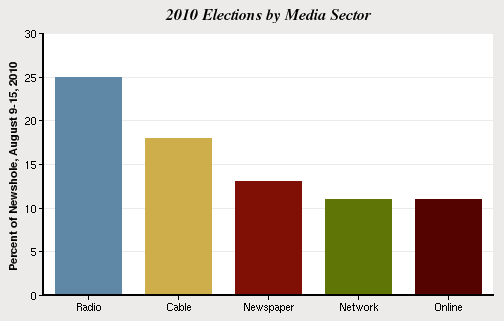 The economy was the leading story in two media sectors last week—online news at 12% and network news at 12%.

Some of last week’s coverage involved the House passage, mostly along party lines, of a $26 billion measure that would pay for a teacher jobs bill and more state Medicare funding.

An August 10 story on the PBS NewsHour noted that, “Democrats said this will allow affected states to shift funds to other priorities, like keeping more than 150,000 police officers and other public workers employed… But Republicans dismissed the appeal as pure politics. Congressman John Kline of Minnesota said states are operating education budgets that they simply can’t afford.”

Much of the remainder of the coverage, as has been the case in recent weeks, relayed gloomy news.  About one-sixth of all the economic coverage last week focused on the employment picture. And the numbers weren’t reassuring.

“There’s more discouraging news on the economy,” declared a CBS radio newscast on August 12. “New claims for unemployment benefits are at the highest level since February.”  The report quoted one economist who called the news another sign that the “job market is still very weak.”

On August 10, on NBC’s Nightly News, anchor Ann Curry offered the same basic message: “Today, the Federal Reserve lowered its expectations for economic growth, kept its main interest rate near zero, and said it will pump more money into the economy by buying U.S. treasuries,” she said. “Analysts say the move reflects the central bank’s concern about whether the economic recovery is sustainable.”

The week’s third biggest story (5%) was the death of former Alaska Senator Ted Stevens, 86, in the crash of a single-engine plane that killed four others. Because of bad weather and the remote location of the accident, there was some initial confusion about whether Stevens had perished.

A New York Times story examined his mixed legacy. “Serving in the Senate for 40 years, longer than any other Republican, he was known as a fierce and often hot-tempered advocate for his state,” the story stated. “But that long and productive Senate career ended ignominiously. In October 2008, a federal jury in the District of Columbia found that Mr. Stevens had concealed more than $250,000 in gifts and convicted him on seven felony counts…” That conviction was later thrown out, but not before he had lost his seat.

The No. 4 story, the immigration debate, generated the most attention on cable, at 10% of the airtime studied. Much of this homed in on a new political angle to the story. Some conservatives, including Senator John McCain, are calling for hearings into the repeal of the 14th Amendment to the Constitution, expressing their concern about the granting of citizenship to children born in the U.S. to undocumented aliens. A number of Republican Party officials have voiced opposition.

And after a long run at or near the top of the news agenda, coverage of the No. 5 story, the oil spill, sunk to 3% last week. That is less coverage than the previous lowest level—the 5% that the story generated the week April 19-25 when the extent of the disaster was far from known.

In one sign of the media’s decreasing interest in the story, it registered at only 4% and 3% in network and cable news respectively—the two media sectors that had been devoting the most attention to it. 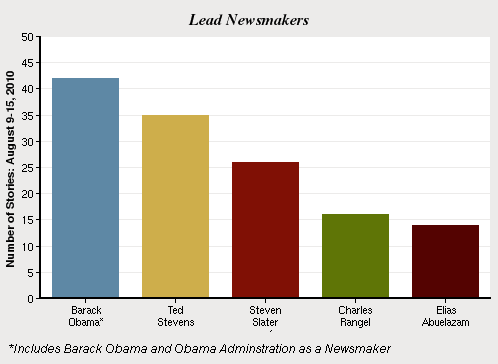 In a week in which no one truly dominated the headlines, the top newsmaker was Barack Obama and his administration, registering as a lead newsmaker in 4% of the stories. (To be a lead newsmaker, someone must be featured in at least 50% of a story.) That is a relatively small number and represents only half as much coverage as the Obama generated the previous week.

He was followed closely (3%) by Ted Stevens, who lost his life in the small plane crash. Next, also at 3%, was one of the nation’s newest instant celebrities. Steven Slater became a household word after the disgruntled JetBlue flight attendant quit his job in spectacular fashion—by bad mouthing a passenger over the intercom, grabbing some beer and using the emergency chute to exit the plane and his career. (This week, there is already talk about Slater hosting a reality show that would feature other unhappy employees bidding their jobs adieu in similarly spectacular fashion.)

The fourth-biggest newsmaker was Democratic New York Congressman Charles Rangel (2%), who made the list of top newsmakers for the fourth week in a row as he faces ethics charges.

The No. 5 newsmaker (1%) was Elias Abuelazam, the man accused of a series of stabbings in Michigan, Ohio and Virginia that left five people dead.

The Media Roar into the Midterms