Due largely to BP’s most promising effort yet to stop the flow of oil into the Gulf of Mexico, that ongoing environmental disaster led the week’s news, generating its highest amount of coverage in three weeks.
From July 12-18, the spill filled 20% of the newshole, according to the Pew Research Center’s Project for Excellence in Journalism—with coverage focused largely on the installation of a new containment cap. While media attention was up moderately from 15% the previous two weeks, it  still fell well below peak coverage levels from late May through late June, when the story consistently accounted for one-third or more of the newshole.

Still, the roster of top stories for the week suggests that, at least for now, no other topic has emerged to replace the Gulf oil disaster as the dominant mainstream media narrative.

At No. 2 last week was the U.S. economy, accounting for 14% of the newshole. Much of the coverage focused on the Senate’s passage of the financial oversight bill, a piece of legislation designed to more closely regulate the industry at the center of the financial meltdown in September 2008.

Politics was again a top story last week, with the 2010 mid-term elections filling 6% of the newshole. Democrats became fodder for talk show hosts on both sides of the ideological divide who picked apart the infighting within the party and forecast varying degrees of Republican resurgence in the fall. It was the No. 3 story of the week.

The war in Afghanistan was the No. 4 story for the week (4%), making headlines primarily for two reasons. One was the violence on the ground as eight Americans were killed in several incidents. The other was the news that General David Petraeus and Afghan President Hamid Karzai had forged a new plan to counter the Taliban.

shole), was the death of a controversial American sports icon, New York Yankees owner George Steinbrenner, who was the subject of post-mortems across the country last week. Few sports writers missed the chance to recount the life of one of professional sports’ most well-known, figures, a man who had both avid supporters and fierce detractors.

Cautious Optimism in the Gulf

The Gulf oil spill was the top story last week in all sectors of the mainstream media, except for radio—generating the most coverage on network news, at 29%. And the overwhelming majority of the coverage focused on the containment and cleanup of the spill.

The week began with high hopes for BP’s latest effort to contain the oil leak by installing a new cap to seal the well. But the oil company, having suffered blows to its image after several failed attempts, tried to tamp down expectations. “Underpromising with hopes of overdelivering,” wrote the Associated Press on July 12, summarizing the company’s public relations strategy for the week.

Initial reports indicated that the cap installation appeared to have gone smoothly.

During the July 12 edition of the O’Reilly Factor, Fox News anchor Shepard Smith interrupted the program with a breaking news update: “We’re pre-empting the commercial break only here to let you know that these pictures indicate that BP has been able to get the containment cap back in place over the gusher in the Gulf of Mexico. We are now led to believe that tomorrow there will be pressure tests of this brand new cap to see if they can’t once and for all contain the gusher in the Gulf.”

The pressure tests of the new cap continued through the rest of the week. So did questions about the efficacy of the cap.
“Is it Over?” asked the headline on USA Today’s July 16 edition. An ABC News web story on the same day described Gulf Coast residents and BP officials “still holding their breath in the nearly 24 hours since the oil stopped gushing.” 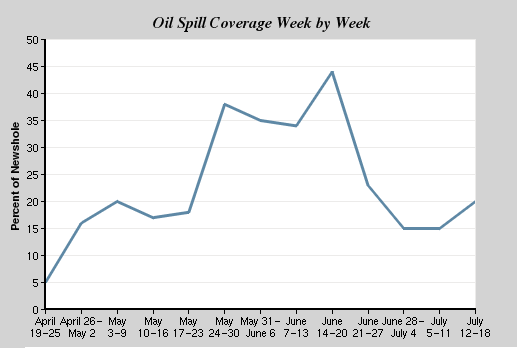 At the week’s end, there were concerns that oil was seeping from the well into the seafloor, but pressure tests continued in a sign that the cap seemed to be holding.

Whether or not BP has stopped the flow of oil, the company may have succeeded in turning the media’s attention from their culpability for the disaster to the technicalities of installing and testing the new cap.  Only about 5% of last week’s spill coverage focused on the corporate responsibility angle of the story. (Even smaller was the attention on the federal government, including the Obama Administration’s handling of the crisis).

News about the economy doubled last week from the week before, up to 14% of the newshole from 7%. And from July 12-18, it was the top story in the radio sector, accounting for 32% of the airtime studied.

About one -third of that coverage focused on the Senate’s passage of a sweeping oversight bill designed to update regulations for the financial industry.

The Wall Street Journal published a July 13 story concluding that the bill will have a broad impact on many aspects of the U.S. economy: “Designed to fix problems that helped cause the financial crisis, the bill will touch storefront check cashiers, city governments, small manufacturers, home buyers and credit bureaus, attesting to the sweeping nature of the legislation, the broadest revamp of finance rules since the 1930s.”

But news about the economy last week also focused on a number of other topics that never seem to disappear. Reporting on employment data made up 20% of the economic coverage. Assessments of the federal stimulus impact made up another 7%. At 5% of the economic news was the still ailing housing market.

Much of that coverage depicted a troubled state of affairs for the economy. Even when the news was seemingly good, such as a drop in jobless claims, it was often tempered by other information, in this case, a drop attributable to seasonal trends.

Last week, coverage of mid-term elections filled 6% of the newshole, and highlighted the perceived lack of unity in the Democratic Party. White House Spokesman Robert Gibbs’ suggestion that Democrats could lose control of the House of Representatives in November provided plenty for cable hosts to talk about, as did Nevada Senator Harry Reid’s statement that Obama was avoiding confrontation with the Republicans.

On July 16, in an appearance on MSNBC’s Hardball, NBC’s David Gregory described the fallout from Gibbs’ statement: “It was almost as if he woke up a bunch of House Democrats that didn’t know they were in trouble.”

Gibbs’ comments rankled some in his party.  A July 15 Washington Post article, “House Democrats Hit Boiling Point,” reported that,  “In recent weeks, a widespread belief has taken hold among Democratic House members that they have dutifully gone along with the White House on politically risky issues—including the stimulus plan, the health-care overhaul and climate change—without seeing much, if anything, in return.”

It was a violent week for U.S. soldiers fighting in Afghanistan. But coverage of the conflict—which was the No. 4 story of the week at 4% of the newshole—included a sign of cooperation between Afghan President Hamid Karzai and NATO forces.

News organizations on July 15 reported that NATO commander General David Petraeus was working with Karzai to adopt a plan to deploy as many as 10,000 of Afghanistan’s forces to combat the Taliban inside the country. But this news came on the heels of reports that eight U.S. soldiers had been killed within a 24-hour-period.

The No. 5 story of the week, at 3%, was the death of New York Yankees owner George Steinbrenner. A July 14 New York Times headline aptly summed up the two sides of the man as remembered by sportswriters around the country: “Steinbrenner remembered as despot and hero.” 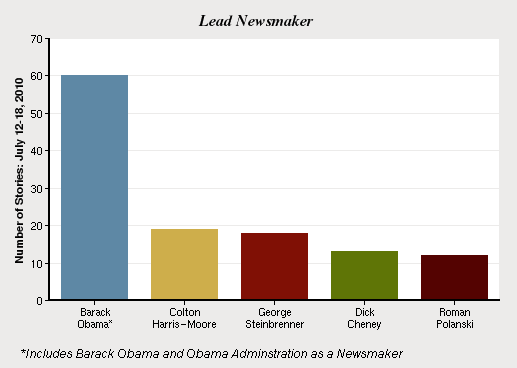 President Barack Obama and his administration were the top newsmakers from July 12-18, appearing as lead newsmaker in 6% of the week’s stories, as pundits and talk show hosts analyzed his impact on the mid-term elections. (That amount of coverage was up modestly from 5% the previous week.) Obama’s ambitious policy agenda in the first half of his term was weighed against the potential voter backlash it might trigger against Democrats up for re-election.

The No. 2 newsmaker (at 2%) was Colton Harris-Moore, known as the “Barefoot Bandit.”  After a lengthy pursuit, Harris-Moore was finally apprehended by authorities in the Bahamas for numerous alleged burglaries, including a stolen plane. In some of the coverage, the 19-year-old   was treated almost as a folk hero in a saga with a made-for-TV quality to it.

George Steinbrenner was third among the top newsmakers of the week—registering in 2% of the stories.  Former vice president Dick Cheney was the No. 4 newsmaker of the week, after undergoing heart surgery that left him with a mechanical device next to his heart. He was the focus of 1% of stories for the week.

Finally, the news that Switzerland would not extradite film director Roman Polanski—who pled guilty to child sex charges more than 30 years ago—put the media spotlight on the famed movie maker. He was the No. 5 newsmaker of the week, also at 1% of all stories.