Coverage of the Gulf oil disaster took a decidedly political turn as the story entered its ninth straight week among the top news events.

The spill accounted for 44% of the newshole from June 14-20, its highest level of coverage to date, according to the Pew Research Center’s Project for Excellence in Journalism. That’s up markedly over the previous week (34%) and represents the most coverage for any story since the landmark health care bill passed Congress, filling 45% of the newshole from March 22-28.

After weeks in which the cleanup, containment and impact of the spill dominated the Gulf coverage, the narrative pivoted substantially last week.  Nearly half of the spill coverage focused on BP’s role in the disaster and its responsibilities moving forward. The next largest portion, about a third, focused on the federal government’s actions and response.  Only about one-fifth concerned the ongoing attempts to fix the leak and clean up the mess.

The spill also generated more than six times as much coverage as the week’s No. 2 story. The U.S. economy filled 7% of the time on television and radio, and space online and in print, led by news about housing and jobs. The No. 3 story, at 5%, was the war in Afghanistan, with reports of vast mineral discoveries in the country and General David Petraeus’s fainting spell in the Capitol.

The week’s No. 4 story was the eruption of ethnic violence in Kyrgyzstan, at 3% of the newshole. Finally, the No. 5 story of the week was the 2010 elections (also at 3%), with a curious upset in South Carolina’s Democratic Senate primary fueling the narrative.

From the Gulf Coast to Washington, D.C.

From June 14-20, the Gulf story was given the full talk show treatment as President Obama addressed the nation from the Oval Office and oil industry executives testified before Congress.

The spill was the top story across all media sectors studied. It accounted for 52% of the airtime studied on network news, 47% of the newshole on radio, 33% in newspapers and 30% online.
But no media platform paid as much attention to the subject as the ideological talk shows on cable and radio, which devoted 68% of the airtime studied to the story last week.

The single largest portion of this week’

s spill coverage was reserved for BP and its beleaguered chief executive, Tony Hayward. The appearance of the company’s executives in the White House and particularly in congressional hearings produced a torrent of anger that quickly became a key element of the story.

An AP story that ran on Yahoo News’s front page on June 15 described “One lawmaker after another” expressing “frustration at BP’s inability to stop oil gushing from its stricken well as the chief executives of ExxonMobil, Chevron, ConocoPhillips and Shell—as well as BPAmerica — sat shoulder to shoulder at the witness table.”

Kelly O’Donnell, reporting for NBC Nightly News on June 15, described the first of the hearings as “An entire industry interrogated and scolded by Congress.” O’Donnell noted the bipartisanship, too: “Lawmakers from both parties demanded a pound of flesh.”

In the midst of this bipartisan finger-pointing, at least one character appeared to go off script when Texas Republican Rep. Joe Barton apologized to BP on the floor of the Rayburn Building. Barton’s description of BP’s $20 billion fund for damages as a “shakedown” engineered by Obama drew a quick reaction from Democrats, Republicans and commentators.

Liberal host Keith Olbermann, on his June 17 broadcast of Countdown, was acerbic: “It was a brilliant day for Democrats, politically, distracting attention from the White House handling of the oil spill by pulling an age-old dirty political trick: they let Republicans talk.”

Even Fox News Channel’s Bill O’Reilly, often a conservative sympathizer, defended the fund. “President Obama should be applauded for getting BP to pony up twenty billion dollars. In fact, that’s the best thing the president has done in the whole mess,” said O’Reilly, in his opening commentary on June 18. 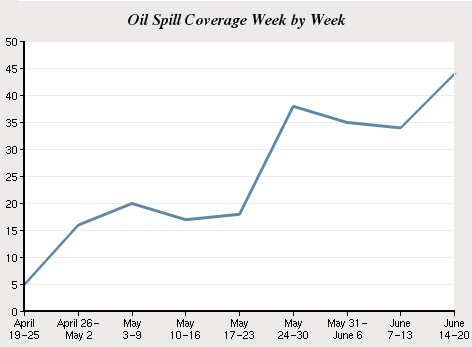 seize the narrative by addressing the nation on June 15, for the first time from the Oval Office—a venue often favored by presidents in a time of war or national duress. That helped created high expectations for the speech, expectations that may not have been met according to many analysts and pundits.

Peter Baker, in an analysis for the New York Times, wrote, “For eight weeks, the spill has seemed somehow too big and too difficult to meet as the president struggled to contain it while trying to demonstrate leadership, sympathy and anger. It was not clear that this was one of those dramatic moments that alter the arc of a political crisis.”

Wall Street Journal reporter Jonathan Weisman interviewed a Pensacola, Fla., resident the day after the speech who “said the president had not gone far enough” and that “Mr. Obama should have declared a national disaster to get more help to the Gulf more quickly.”

Not all found the president’s leadership lacking. Liberal host Ed Schultz, in his lead-in to the June 16 broadcast of his MSNBC program, addressed him directly: “President Obama—you are the dude. The president takes the heads of BP behind closed doors, shakes ‘em down for $20 billion, and gets an apology.”

The rest of the week’s news

The No. 2 story last week was the economy, as home construction rates dipped following the expiration of the first-time homebuyer tax credit, and the Senate blocked a package of jobless benefits. The story occupied 7% of the newshole, the fourth week in a row it has hovered at around that level.

Two developments were largely responsible for the 5% of last week’s coverage focused on the war in Afghanistan. On June 15, U.S. General David Petraeus collapsed while testifying about the war before Congress, but attributed it to nothing more than dehydration. Also last week, the New York Times reported on the discovery of vast mineral deposits in the country—a find that could provide enough capital to significantly alter the balance of that ongoing conflict, according to the story.

U.S. media also turned to Kyrghistan last week as days of ethnic violence in the southern city of Osh left nearly 200 dead and 200,000 displaced. It was the No. 4 story of the week, and received 3% of all coverage.

Also at 3% of the week’s news were the 2010 mid-term Congressional elections. Outlets covered a number of races around the country, but nothing captured media’s attention more than the South Carolina Democratic Senate primary winner, Alvin Greene. Greene’s lack of employment or political experience, and his nearly non-existent campaign, made his victory a surprise to many. Some floated the idea that Greene was a Republican plant. 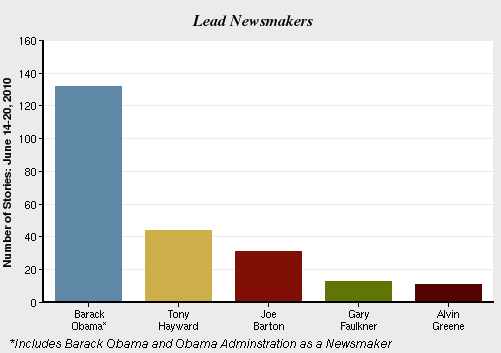 During the week of June 14-20, President Obama was the heavy focus of the news media, with 14% of all the week’s stories including him as a lead newsmaker. (To register as a lead newsmaker, a figure must appear in at least 50% of that story.) That is nearly three times the amount from the previous week, and stems largely from his June 15 Oval Office address on prime-time television. Indeed, the week’s top three newsmakers were all connected to the Gulf oil disaster.

The No. 2 newsmaker was embattled BP chief executive Tony Hayward, the focus of 5% of all stories. Hayward was summoned to the White House for a meeting with the president, and then to Capitol Hill for a tough hearing before an angry Congress.

Texas Republican, Congressman Joe Barton, was the No. 3 newsmaker of the week. Barton’s apology to Hayward exposed a fault line in his party as GOP leaders chastened him for perceived softness toward the oil giant. Barton was the focus of 3% of stories.

Next came Gary Brooks Faulkner, an American construction worker whose detention in Pakistan interrupted his mission to kill Osama Bin Laden. Faulkner was the subject of 1% of the week’s stories, as the news media attempted to shed light on this “serious but rational” man, as the Washington Post noted, who set out on his desert quest with a sword and a pistol.

Finally, in 1% of stories was Alvin Greene, the confounding winner of the South Carolina Democratic primary. Greene, an unemployed veteran, defeated Vic Rawl despite having virtually no campaign infrastructure. He was the No. 5 newsmaker of the week.

A Tough Economy and a Plugged Leak Top the News