Two stories—one environmental, one political—dominated the news agenda last week, accounting for more than one-third of the mainstream media coverage.

An almost daily series of developments kept the worsening oil spill in the Gulf of Mexico in the headlines. It accounted for 18% of the newshole from May 17-23, according to the Pew Research Center’s Project for Excellence in Journalism.

For the fifth week in a row, the Gulf spill registered among the top three stories as oil continued to gush from the disabled undersea well, resulting in vivid images of soiled beaches and dead wildlife. Congressional hearings again provided a venue for lawmakers to question the response of oil company BP and the federal government

Right behind that environmental disaster (also at 18%) were a handful of May 18 elections that provided a glimpse of the electorate’s mood heading into this fall’s mid-term contests—at least as far as the pundits were concerned.

Election coverage was driven in good measure by one sector—cable news—where it accounted for 33% of the airtime studied. The results—which included a defeat for veteran Pennsylvania Senator Arlen Specter and a victory for Kentucky tea party favorite Rand Paul—provided fodder for commentators on the politically oriented cable talk shows. The result was coverage largely driven by analysis, rather than breaking news.

An additional election-related story also broke during the week. Allegations, reported in the New York Times, that Connecticut Attorney General and U.S. Senate candidate Richard Blumenthal falsely claimed a combat record in Vietnam accounted for another 3% of the newshole.

The economy came in at No. 3 for the third week in a row, at 11% of the newshole. The topic has been losing ground to other stories since it hit a 13-month high of 27% the week of April 19-25. Last week’s coverage was dominated by Senate progress on a bill to reform the regulation of Wall Street.

The fourth story, at 5%, was Iran. Much of the coverage was triggered by that country’s announcement of a deal to ship uranium to Turkey and U.S. efforts to press for sanctions. Another foreign policy related story, a state visit to Washington by the President of Mexico, was No. 5 at 3% of the newshole. Felipe Calderone took the opportunity to speak out forcefully against the controversial immigration law recently enacted by Arizona.

Coverage of the gulf oil spill took a number of dramatic turns during the week, marking the second week in a row that the story has been No. 1. In two other weeks since the April 20 oil rig explosion that caused the spill, the subject finished as the No. 2 story.

Last week, the majority of coverage, about two-thirds, concerned the cleanup, containment efforts, and the impact of the spill on the environment or businesses. In a sign that the media narrative had not yet taken on much of a partisan or politicized slant, only about one-fifth of last week’s spill coverage involved the disaster’s political impact.

Last week’s coverage began with some signs of hope. Energy company BP plc announced it had succeeded in inserting a feeder pipe into the leaking wellhead, and was siphoning off some of the spill to a ship on the surface. A May 17 Associated Press account on AOL News reported that more progress was in the offing: “The first chance to choke off the flow for good should come in about a week. Engineers plan to shoot heavy mud into the crippled blowout preventer on top of the well, then permanently entomb the leak in concrete.”

By the end of the week, however, that optimism had faded as news emerged that the amount of oil being collected was not as great as anticipated and efforts to permanently choke off the flow were going more slowly. Meanwhile, scientists reported that official estimates had vastly undercounted the magnitude of the spill and that the crude might have entered a current that would take it up eastern seaboard.

The network news shows devoted the most coverage to the subject—25% of their airtime last week. One reason was the strong visual elements that emerged as the oil moved from the open ocean to the white-sand beaches, where it killed turtles, pelicans and other creatures. On ABC’s Good Morning America May 17, an interview with a BP executive was preceded by a story in which a correspondent on location reached into water and pulled out a handful of the sticky crude.

Coverage of the early primaries and one special election last Tuesday was especially heavy on the cable news programs, which tend to focus on political topics.

Cable devoted 33% to the topic, more than any of the other sectors, while devoting 18% of its airtime to the oil spill. In contrast, the network news shows apportioned their time in almost the reverse pattern: 13% to the political developments of the week and 25% to the oil spill.

The biggest news came from elections held in Pennsylvania, Arkansas and Kentucky. Coverage began well before the first ballots were cast. Jonathan Karl, senior ABC congressional correspondent, told viewers of the May 17 World News that, “This super Tuesday features four big races and a healthy dose of voter anger that could turn Washington upside down.” 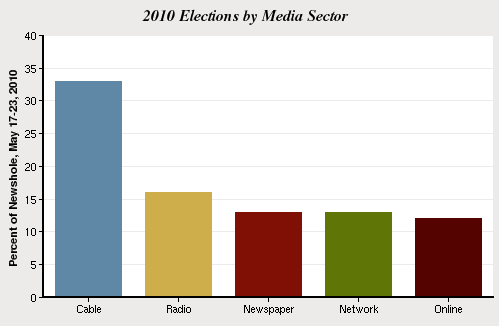 The results did shake up the political world. Five-term Senator Arlen Specter, who last year switched parties, lost to a more liberal opponent in the Democratic primary. A senate candidate heavily backed by the Republican establishment in Kentucky lost that party’s primary to Rand Paul, a political neophyte backed by tea party activists. And Arkansas Senator Blanche Lincoln beat Bill Halter, a labor-backed opponent in the Democratic primary, won but failed to get enough votes to avoid a runoff with him. And despite heavy campaign spending by Republicans, voters in a special election chose another Democrat to fill the seat held for many years by the late John Murtha in Pennsylvania.

The results eluded easy summation, but the Wall Street Journal, in a May 19 story headlined “Primary Voters Rebuke Parties,” concluded that both Democrats and Republicans were swept up in an anti-incumbent tide. The voters, the paper reported, “showed they were ready to sever ties with candidates too closely identified with Washington and its political leaders.”

On the cable talk shows, the analysis varied according to the political inclinations of the hosts. Bill O’Reilly, conservative host of Fox’s “The O’Reilly Factor,” told his viewers that, “The importance of the vote yesterday is that president Obama is no longer a force in electoral politics. He’s pretty much on the sideline.”

“It’s clear that Americans are angry and want change in Washington. It’s also clear that Republicans have an opportunity in November if they can put forth solutions to complicated problems. As for the Democrats, right now, it’s midnight at the oasis,” O’Reilly added.

On the left, MSNBC host Ed Shultz saw a vindication of liberalism.

“Every progressive in this country should be fired up about this now,” he said. “You see, Mr. President, It’s OK and it is time to go left. The seasoned political experts are spinning last night’s results as a win for the tea party and a big loss for the president. Hold the phone. Listen up everyone. The most liberal candidates in Pennsylvania won. Halter and Blanche Lincoln are headed for a run off.”

Coverage of the economy continued to be overtaken by other stories, but still came in at No. 3, at 11% of the newshole. Much of the coverage concerned progress on a Senate bill to overhaul regulation of Wall Street. In all, stories about federal oversight of the economy represented about 40% of the economic coverage.

Two stories related to Iran pushed that country back into the news, with 5% of the newshole. That is the most coverage of Iran since February 8-14 (also 5%) when protests marked the 31st anniversary of the Islamic Revolution and the nation announced it was escalating its uranium enrichment program.

Last week, Iran made news when it announced a deal to ship some of its uranium to Turkey for processing, a compromise that was immediately rejected by the U.S. and its allies who announced an agreement for stricter sanctions against Iran. Most of the rest of the coverage related to three American hikers who were arrested in July after crossed the border from Iraq into Iran. The country permitted a visit by their mothers last week.

A visit to Washington by Mexican President Felipe Calderon and his condemnation of a law recently enacted in Arizona to clamp down on illegal immigrants was the fifth- biggest story of the week, filling 3% of the newshole. 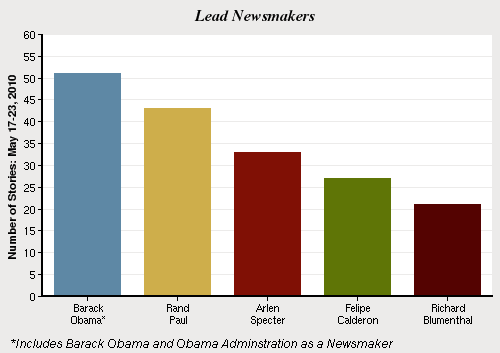 From May 17-23 the two leading newsmakers, after President Obama, were key players in the May 18 elections.

The President was a lead newsmaker in 5% of the week’s stories. (To be a lead newsmaker, a person must be referred to in at least 50% of the story) Next came Rand Paul, (4%) who not only won the GOP senatorial primary in Kentucky but made news by expressing some reservations about the 1964 Civil Rights Act. (He later said he supported the law). Arlen Specter, who lost his primary race as a Democrat most likely ending a long political career, was No. 3, at 3%.

Next on the list of newsmakers came visiting Mexican President Felipe Calderon, also at 3%. Director of National Intelligence Dennis Blair, who Obama fired last week, was fifth at 2%.