The state of the U.S. economy, driven by the political battle over how to regulate Wall Street, dominated the news last week to an extent not seen in more than a year.

The media devoted 27% of the newshole to the economy during the week of April 19-25, according to the Pew Research Center’s Project for Excellence in Journalism, up from 16% the previous week. That represents the most coverage of that subject since the week of March 23-29, 2009, when Treasury Secretary Timothy Geithner unveiled a plan to clean up “toxic assets” in banks and economic news represented 43% of the newshole.

More than three-quarters of last week’s economic coverage focused on the financial sector, including the legislative reform efforts as well as allegations of fraud and profiteering involving blue-chip investment banker Goldman Sachs.

As the volcanic ash that shut down air travel for much of Europe dissipated, the subject was the No. 2 story, accounting for 11% of the newshole. That was followed, at 5%, by the April 20 fire and eventual sinking of an off-shore oil drilling platform in the Gulf of Mexico which left 11 workers missing and spilled thousands of gallons of crude.

The fourth-biggest story was the controversy over the enactment of a strict immigration law in Arizona (4%) that supporters see as a public safety issue and critics fear will result in racial profiling. Stories related to the 2010 elections were No. 5, at 3%, with coverage including John McCain’s tough Senate primary in Arizona and speculation about whether Florida Governor Charlie Crist would run for Senate as an independent or Republican.

Economy is Story No. 1 Again

While 27% represents a high for economic news in 2010, that falls well short of the top weeks of coverage. It exceeded 40% during several weeks in early 2009 and hit 53% March 16-22, 2009, when news broke about insurance giant AIG handing out big bonuses after receiving bailout funds. That was the biggest week of economic news since PEJ began its News Coverage Index in January 2007.

But last week does represent a significant surge for a story that had been eclipsed by subjects such as the health care reform debate and the Haiti earthquake. Its previous high water mark for this year was 21% during the week of February 1-7 when President Obama unveiled his proposed budget for the federal government. For the year to date, the economy has been the top story at 13% of the newshole. For all of 2009 it was 20%.

Last week’s coverage was not due to a single blockbuster development but rather to developments in a succession of related storylines that provided the fresh angles and twists and turns that often capture and keep the media’s attention.

The week opened, for example, with the continuing fallout from a lawsuit the Securities and Exchange Commission filed April 16 against Goldman Sachs, alleging fraud. Days later, the company, which had received bailout funds from the government to stay in business, reported a robust, $3.5 billion profit for the first quarter, emboldening critics who sought to depict it as a symbol of what was wrong with Wall Street.

The company stayed in the headlines as it mounted a public relations defense, and late in the week, investigators released internal emails from the company that seemed to depict top executives bragging that they were profiting from the burst housing bubble that caused misery for so many borrowers and helped precipitate the recession.

This storyline, too, underwent a metamorphosis during the week. Republicans seemed united early on to block the Democratic plan in the Senate, setting up another saga laden with partisan political conflict. CBS correspondent Betty Nguyen reported on the April 19 Early Show that “Republicans are pushing hard against White House efforts for financial reform, but fraud charges against Goldman Sachs may give the Obama administration the edge it needs.”

In fact, Obama and the Democrats did cite the Goldman case as evidence of the need for regulatory reform. The president traveled to Manhattan to make that case himself in a high-profile speech before an audience that included top executives of the firm. Soon reports emerged that some Republicans were relenting and may support the reform bill.

By April 22, the Washington Post was reporting that “Key members of both parties said…that they are close to agreeing on the main elements of a bill to overhaul the nation’s financial regulations.”

The novelty of bipartisan agreement on major legislation was itself a big story,  though it was followed in ensuing days by reports that Republicans were having a change of heart and would seek to block a key procedural vote the following Monday. 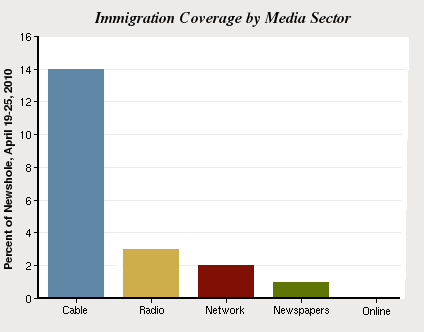 As the Washington Post reported on April 23, “Senate Republicans continued to oppose the pending test vote, known as cloture. They used the threat of a filibuster as a bargaining chip, saying Dodd’s bill contains flaws that could harm the economy.”

Authorities in Europe reopened airspace to commercial traffic mid-week, freeing thousands of travelers who had been grounded by a drifting cloud of volcanic debris that came from an April 14 eruption in Iceland. The volcano was the second-biggest story from April 19-25, claiming 11% of the newshole, up from 7% the week before, when it was also the No. 2 story.

As air currents pushed ash back toward its source, travelers took to the air above Europe, resulting in this April 23 account by AOLNews.com: “In an ironic backlash by Mother Nature, the volcanic ash cloud that caused the worst European flight disruptions in history has now blown back to Iceland, closing airports there for the first time since the volcano erupted more than a week ago.”

Just as the volcano was cooling, a disaster at sea was moving in to fill its void in the news: an offshore drilling platform in the Gulf of Mexico caught fire and sank on April 20. Rescue efforts were launched for the 11 missing workers and teams were scrambled to contain the oil leaking from the ocean floor. For the week, the story filled 5% of the newshole.

The debate over immigration reform accounted for another 4% of the newshole, prompted by Arizona enacting a tough law that, among other things, permits police to demand proof of immigration status from people suspected of being in the country illegally.

The subject of illegal immigration arouses strong passions, and was especially prominent last week on cable television—where talk show hosts tend to favor topics that attract strong opinions. The story was No. 2 on cable, with 14% of the airtime studied, compared with just 2% on network television news.

Stories highlighting a number of hotly contested Congressional races led the reporting on the 2010 elections during the week, claiming 3% of the newshole and the No. 5 slot. Among the stories: Florida’s governor, once a favorite to win the Republican nomination for the Senate, acknowledged he may run as an independent; Obama endorsed endangered California Sen. Barbara Boxer; and former GOP presidential candidate John McCain’s struggle to win his party’s nomination for re-election to the Senate from Arizona. 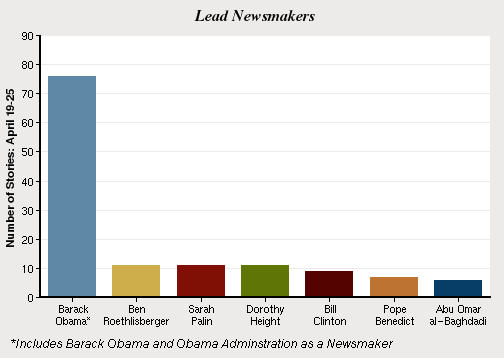 Other than  President Obama  (7%), none of the other top headline generators last week were lead newsmakers in more than 1% of the stories in the PEJ sample last week (To be a lead newsmaker a person must be referred to in at least 50% of the story).

Scandalized NFL quarterback Ben Roethlisberger, who was suspended by the league in the wake of an alleged sexual assault case that was not prosecuted, was No. 2. Former GOP vice presidential nominee Sarah Palin, who testified last week in a criminal case against a man accused of hacking her email account in 2008, was No. 3. Dorothy Height, eulogized as a “founding matriarch of the civil rights movement,” died at 98 and was the No. 4 newsmaker.  She was followed by former president Bill Clinton, who, on the anniversary of the Oklahoma federal building bombing by an anti-government extremist, warned of the dangers of anti-government rhetoric.

Old and New Media Both Make News, but Economy Tops the Agenda