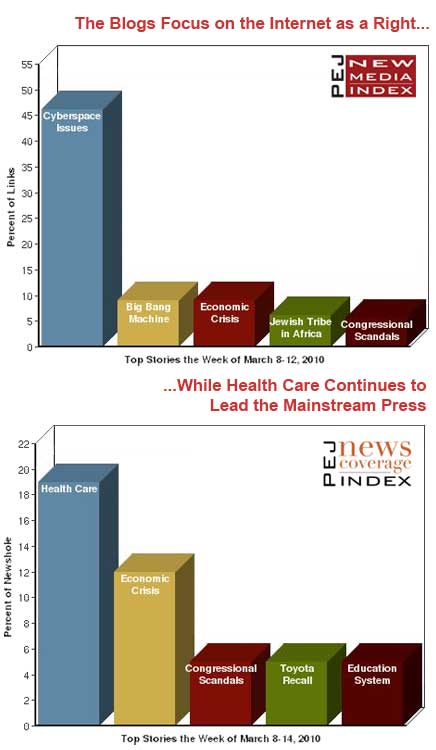 Last week, in very large numbers, bloggers focused on a subject near and dear to their hearts-access to the internet.

From March 8-12, the top story in the blogosphere was a BBC survey of more than 27,000 adults worldwide in which four out of five people consider internet access a "fundamental right."  Fully 43% of links in blogs were about this story and a related information graphic that mapped the spread of internet access around the world.

The survey elicited more attention among bloggers than any other story in 2010, other than the devastating earthquake in Haiti, which also received 43% of the links the week of January 11-15, 2010.  And since PEJ began the New Media Index in January 2009, there have been just 10 stories in all that have captured more than 40% of links.

Bloggers largely championed the idea of online access as a basic right and some called for legislation and programs to expand it. But many also dissected the survey findings closely, and some expressed concern that the question -"To what extent do you agree or disagree that access to the internet should be a fundamental right of all people?"- was too vague.

The second-biggest story on blogs (9% of links) was about the Large Hadron Collider–the large particle accelerator that scientists hope will help discover the origins of matter-but which must close at the end of 2011 to address design flaws.

Neither of these topics generated significant interest in the mainstream media last week, though the traditional press and the blogs did overlap on attention to the economy and the scandal involving ex-Congressman Eric Massa.

The economy was the No. 2 story in the mainstream press and No. 3 in the blogs (with 9% of links.  The main focus of the discussion in blogs was a Washington Post investigative piece reporting that the normal time-period for unemployment benefits, six months, had for some been extended for up to two years.

The Massa story was the No. 3 story in the mainstream press last week and No. 5 among bloggers at (6% of the links). The former Congressman, under investigation for alleged sexual harassment of male staffers, has claimed he was forced out because he opposed the health care bill. The focus on blogs was a mix between a fairly straight accounting of events and Massa’s rambling interview with Fox’s Glenn Beck that ended with Beck apologizing for wasting his viewers’ time.

The fourth-biggest subject among bloggers (6% of links) was about a DNA test performed by British scientists. The tests confirmed that a group of people in Zimbabwe and South Africa who claimed to be descendants of Jews that fled the Holy Land 2,500 years ago are in fact genetically linked to Jewish people of that time period.

In a pattern we have seen often in the NMI, three of the top five linked-to stories on Twitter last week tilted heavily toward technology.  In the mix was Apple’s upcoming release of the iPad (No. 1 with 20% of news links), a group of stories about just-launched websites and web-technologies (4th at 8%), and the story of Jet Blue’s Twitter post that it would be giving away tickets on the social networking service (5th at 8%).

Also among the top stories on Twitter was the March 9 shooting at Ohio State University in which three Ohio State employees were shot on campus-the identity of the shooter was not released by police.  One victim was killed and the other two were injured in the attack. This story ranked second, generating 11.5% of new links on Twitter. 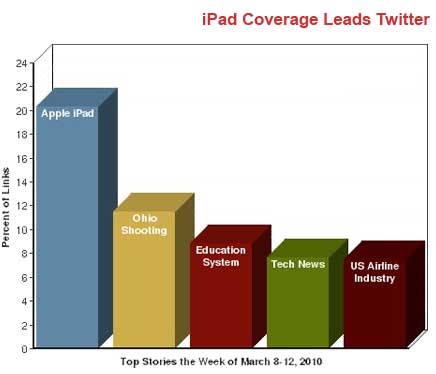 The third-biggest story on Twitter (9% of links) was about the Kansas City School Board’s decision to close nearly half of the public schools because of financial trouble. Educational issues also represented one of the top stories (No. 5) in the mainstream press last week, filling 5% of the newshole.

First and foremost, bloggers overwhelmingly voiced agreement with the 79% of  people surveyed who said that access to the internet is a fundamental right.  Indeed, it is access that the vast majority of Americans have, more so than in other countries.  According to the FCC, 78% of U.S. adults are internet users, with 65% having in-home broadband connections.

Some used the poll as a rallying cry for certain policies, such as making the internet a government utility subsidized through taxes.  The Cnych wrote: "The internet would be treated like a public service such as the public library-free access to a wealth of information to citizens of any income level."

Others touted the societal benefits. "Universal access to the internet would certainly help level the playing field as far as opportunities are concerned." writes Poli-Tweets, "The access to information, the potential to learn and grow, could be the same for everyone."

Some bloggers pointed out differences in opinion among the countries surveyed. Blogger Mark Lewis on Slaw.ca reflected on Canada’s somewhat less enthusiastic response. "The three countries: who had the highest percentage who believed the internet was a fundamental right were: South Korea (96%), Mexico (94%), and China (87%)…In Canada 77% of respondents felt that the internet should be a fundamental right of all people, while 64% of Canadian respondents stated they could ‘cope without the internet.’"*

Some bloggers challenged the phrasing of the poll itself.

A post on the blog End of the Line wondered, "My first question was probably not unique: What do you mean by access?"

A number of bloggers agreed that the vaguely worded question needed clarification.

Coyote Blog echoed the sentiment that the poll question was flawed, "I would rewrite this study either as "80% of people have a silly definition of human rights" or probably more correctly "100% of BBC poll authors do not know how to write a good poll question."

The top news-related video on YouTube last week was a short piece from CBS News online about a British grandmother who has begun a career as a DJ at some Paris nightclubs. The clip, only about 90 seconds long, showed an elderly grandmother wearing sunglasses talking about how she got into being a disc jockey at her age, and how she relishes bringing joy to her much younger audience.

The second most-watched video was a seven-second long clip of Majority Leader Harry Reid on the Senate floor saying: "Today is a big day in America, only 36,000 people lost their jobs today, which is really good… ." The clip cuts off the beginning and end of Harry Reid’s full statement on the Senate floor, taking his comments somewhat out of context.

A prominent Web tracking site Icerocket, which monitors millions of blogs, uses the links to articles embedded on these sites as a proxy for determining what these subjects are. Using this tracking process as a base, PEJ staff compiles the lists of links weekday each day. They capture the top five linked-to stories on each list (25 stories each week), and reads, watches or listens to these posts and conducts a content analysis of their subject matter, just as it does for the mainstream press in its weekly News Coverage Index. It follows the same coding methodology as that of the NCI. This process allows us to compare the New Media commentary, based on the Icerocket list of links, with the commentary in the traditional press.  Note: When the NMI was launched in January 2009, another web-tracking site Technorati was similarly monitoring blogs and social media. PEJ originally captured both Technorati’s and Icerocket’s daily aggregation. In recent months, though, this component of Technorati’s site has been down with no indication of when it might resume.

Global Warming Heats Up the Blogosphere