Two stories combined to account for about half of the last week’s overall news coverage, the aftermath of the devastating earthquake in Haiti and the political aftershocks from a Republican Senate victory in Massachusetts.

Filling 27% of the newshole, the situation in Haiti—from chaos on the streets to the expanding U.S. role—was the No. 1 story from January 18-24, according to the Pew Research Center’s Project for Excellence in Journalism. It was the leading subject on newspaper front pages (19%), online (30%) and in network television (35%), as measured in PEJ’s weekly News Coverage Index, which examines coverage in the most relied on mainstream outlets.

The upset election of Scott Brown—whose January 19 victory was widely seen as dealing a serious blow to health care reform—was the week’s second-biggest story, at 21% of the newshole. It topped coverage of the Haiti in cable news (32%) and radio (30%), largely because of the political orientation of the talk shows in those sectors.

But last week, there was a major difference between what was carried on CNN, which does not air ideologically oriented talk shows in prime time, and what aired on MSNBC, with its liberal prime time lineup, and the Fox News Channel, with its conservative hosts. While Haiti made up about 60% of the CNN coverage studied last week, that subject accounted for about one-sixth of time on MSNBC and Fox.

Conversely, while the Massachusetts election accounted for about 40% of the Fox and MSNBC coverage, it filled about 15% of the airtime studied on CNN.  For last week at least, CNN dramatically diverged from its two competitors, devoting considerably more time to Haiti than to the election. Indeed, an examination of last week’s datelines in the News Coverage Index reveals that CNN aired almost three times as many stories originating from inside Haiti than Fox and MSNBC combined.

After Haiti and Massachusetts, the No. 3 overall topic last week was the economy (7% of the newshole), with President Obama’s proposed crackdown on big banks driving the narrative. In a difficult week for Obama, the No. 4 story (7%) consisted largely of assessments of his leadership at the one-year mark in his tenure.

The fifth-biggest story was closely connected to the Massachusetts election. The health care debate filled 5% of the newshole, with much of the coverage focused on the impact of Brown’s victory on the Democrats’ efforts to pass a bill.

Coverage of the disaster in Haiti was most intense in the early part of the week, accounting for 38% of the overall newshole on January 18 and 19. And much of that initial coverage focused on the increasing sense of desperation and danger in country.

A January 18 Washington Post account described fears of “mass violence” as resources became scarce. “The city choked on the stench of death and shook with yet another aftershock yesterday. On the streets, people were still dying, pregnant women were giving birth on the pavement, and the injured were showing up in wheelbarrows and on people’s backs at hurriedly erected field hospitals.”

An Associated Press story noted that European nations had pledged nearly half a billion dollars in aid, but reported that, “help was still not reaching many victims of Tuesday’s quake.” 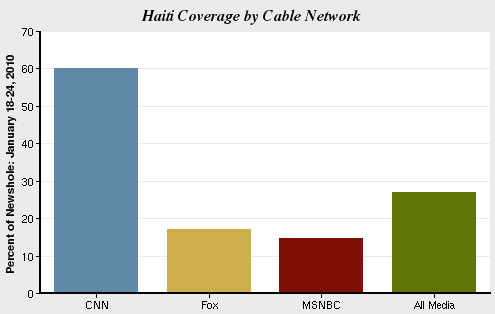 Intertwined with the accounts of carnage and desperation were occasional stories of miraculous survival. On the January 19 edition of CNN’s “Situation Room” ITN correspondent Bill Neely described the rescue of a woman pulled out alive after six days in the rubble.

She “is alive,” he declared.  “And, for her husband, it’s a miracle. But her survival is the exception in a city of death. She drove away as if nothing had happened to see for herself the horror that had been hidden from her.”

Another theme last week was the growing U.S. role in a country that had become rudderless and leaderless.

“American military helicopters landed on Tuesday at Haiti’s wrecked National Palace, and troops began rolling through the capital’s battered streets,” The New York Times reported the January 20. “But the troops’ presence underscored the rising complaints that the Haitian government had all but disappeared…Haiti’s long history of foreign intervention, including an American occupation, normally makes the influx of foreigners a delicate issue.  But with the government of President Rene Preval largely out of public view and the needs so huge, many Haitians are shunting aside their concerns about sovereignty and welcoming anybody willing to help—in camouflage or not.”

And while the extent of the U.S. role in Haiti has not become, at least not yet, a significant political or partisan issue in Washington, that hasn’t kept it from generating clashes in the talk universe.

The week before, conservative radio host Rush Limbaugh created a buzz when he opined, among other things, that Obama would use Haiti to “burnish his credentials” with minorities—part of some remarks that White House press secretary Robert Gibbs labeled as “utterly stupid.”

Last week, the trigger was conservative pundit Ann Coulter, who in a Fox interview criticized Bill Clinton’s visibility in the Haiti relief effort, calling the ex-president a “national embarrassment.”  That earned Coulter the enmity of liberal MSNBC talk host Ed Schultz who labeled her “the hate merchant” in a segment he called “Psycho Talk.”

It seems no issue, even natural disaster, is immune from becoming fodder for the more polarized talk media.

While most of the four-month long battle to succeed Ted Kennedy was largely skipped by the national media, it became a huge story once the prospect of an upset GOP victory on January 19 suddenly became clear.

Indeed, there was an explosion of coverage (34% of the overall newshole) in the 48 hours that included Election Day and the following day’s post-mortems.

Many of those post-mortems debated whether the outcome was more a reflection of a poor campaign by Democrat Martha Coakley or of public unease about health care reform and the ambitious Obama agenda. But with Senate Democrats deprived of their 60-seat filibuster proof majority, one clear consensus was that the election had dramatically altered the political environment.

The January 20 Washington Post declared that “unless Democrats can thread a very narrow legislative needle, Republican Scott Brown’s upset victory over Martha Coakley…could lead to the collapse of a health-care bill that, only weeks ago, appeared close to becoming law…The biggest worry in the party is that moderates will now begin to back away from the legislation, fearing its political effects.”

The next day’s story in USA Today went farther: “Not in decades has the election of a single new senator caused such an upheaval in the capital’s political calculations,” the story ventured.

“President Obama, a year to the day after taking office on a promise of change, issued a public mea culpa for having lost touch with the Americans who elected him. And there were questions about whether Democrats’ hold on Congress might be shaken by a ‘wave’ election in November that could sweep more Republicans into office.”

Partisans on both sides of the political divide in the media universe chimed in. On MSNBC, liberal host Keith Olbermann warned Democrats not to trim their ambitions on health care.

“If the Democrats run for cover… we will lose and deserve to lose,” Olbermann quoted the late Ted Kennedy as telling his party in 1980. “The last thing this country needs is two Republican parties.” Olbermann described Democrats as “appearing to lose their resolve on health care reform” and “reacting to Scott Brown‘s win in Massachusetts, as if that victory had given the Republicans a 41-seat majority in the Senate.” *

Rush Limbaugh on his radio show interpreted Brown’s win as a repudiation of Obama and replayed a tape of his famous year-old remarks in which he expressed the hope that “Obama fails.”

“Every conservative knew Obama’s policies were destined to fail,” Limbaugh told his audience last week. “I want you to listen to how prescient I was.”

The third-biggest story last week (7%) was the economy, with the biggest component of coverage focused on the financial sector. The major news was Obama’s proposal for stronger regulation of the banking industry. The approach—dubbed the “Volcker Rule” after former Federal Reserve Chairman Paul Volcker—was interpreted in some media accounts as part of a White House effort to refocus on populist and pocketbook issues.

The fourth-biggest story (also at 7%) consisted largely of evaluations of the first year of the Obama administration, with many of the stories describing erosion in his support and unmet expectations.

“When Barack Obama was inaugurated one year ago Wednesday, his approval rating in the Gallup Poll was a lofty 67%-14%,” noted a USA Today story. “The latest USA TODAY/Gallup Poll puts his standing at 50%-45%, lower than any post-World War II president starting his second year in office except Ronald Reagan, who was at 49%.”

The story also quoted one Obama voter recalling that one year ago, many people thought “he’s going to magically change all the problems that we have…That expectation was a little unreasonable.”

The No. 5 story (5%) was the health care debate, with the revised political calculus dominating the narrative. Much of the coverage focused on the debate over whether the Democrats’ lengthy and difficult efforts to pass legislation had been dealt a fatal blow by the results of the Massachusetts Senate race. 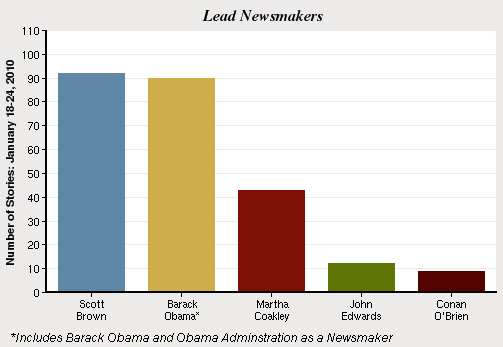 The antagonists in that Massachusetts campaign were two of the top newsmakers the week of January 18-24.  Scott Brown won the competition for exposure, appearing as a lead newsmaker in 9% of the week’s stories. (To register as a lead newsmaker, a figure must appear in at least 50% of a story.) Democrat Martha Coakley was the No. 3 newsmaker (4% of the stories.)

In between was the man whose chief domestic initiative was tied to the Massachusetts vote. Barack Obama was the second-biggest newsmaker, just behind Brown at 9%.

He was followed, also at 1%, by Conan O’Brien, who signed off last week after seven months as host of NBC’s venerable Tonight show. O’Brien was the latest domino to fall in a network shakeup triggered by former Tonight host Jay Leno’s ratings problems in his new 10 p.m. time slot.

*The NCI originally posted on Jan. 26 did not note that MSNBC host Keith Olbermann was quoting the late Senator Ted Kennedy rather than making these statements himself.

Americans’ Views of the News Media During the COVID-19 Outbreak

Midterm Results are the Biggest Story in 2010