Amid signs of disagreement over war strategy within the Obama administration, Afghanistan led the news last week, the first time since the News Coverage Index began in January 2007 that the eight-year-old war has emerged as the top story.

From October 5-11, Afghanistan accounted for 20% of the newshole, according to the Pew Research Center’s Project for Excellence in Journalism, double the previous high-water mark for coverage of the country.

It may mark an emphatic end to the sense of Afghanistan as a low-level conflict occurring largely out of public view and could change the political backdrop against which the impending Obama decision on how to prosecute the war will have to be made. The media attention last week was at a level that accompanied the politically explosive domestic debate over Iraq strategy several years ago.

Afghanistan was even more heavily a television story last week. It filled 30% of the airtime studied on network news and 25% on cable news. That narrative was driven largely by apparent disputes over whether the U.S. should employ a troop “surge” or opt against a major infusion of soldiers in favor of a focus on Al Qaeda rather than the Taliban—or select a strategy in between. Defense Secretary Robert Gates last week rebuked top Afghanistan commander General Stanley McChrystal for going public with his recommendation that the U.S. significantly expand its forces. And a meeting between Obama and lawmakers reportedly included some tense moments with Republicans pressing for a quick build-up of American troops.

The next biggest topic in last week’s news agenda generated a little more half the coverage devoted to Afghanistan. The No. 2 story, at 12% of the newshole, was the economic crisis, although no single theme dominated that narrative. Next, at 10%, was the debate over health care reform, as the legislative process continued to grind along on Capitol Hill. That marked the third week in a row when coverage has hovered at around 10% after a summer run in which the health care debate often generated twice or even three times that much attention.

The fourth-biggest story (5% of the newshole) was the awarding of the Nobel Peace Prize to Obama, an honor that surprised many observers and triggered a heated debate over whether it was deserved. The initial rollout of H1N1 flu vaccine, along with nagging public doubts about its safety, made “swine flu” the No. 5 topic, also at 5% of the newshole.

Afghanistan Explodes Into the Headlines

For a long time, the most noteworthy aspect of mainstream media coverage of the war in Afghanistan was its scarcity.

In 2007, not only was Afghanistan (registering at 1% for the year) almost completely eclipsed by attention to the Iraq war (16%), the topic also generated less coverage than two other international flashpoints where U.S. troops were not fighting and dying—Iran (2%) and Pakistan (2%). And though 2008 was the deadliest year for U.S. forces fighting in Afghanistan, the subject again accounted for only 1% of the coverage that year, generating less overall attention, for example, than the two-week-long Beijing Olympics. 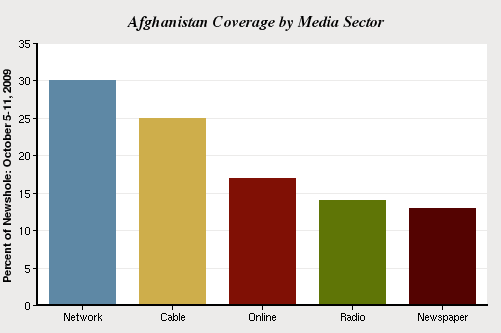 In the first half of 2009, as Obama deepened the U.S. military commitment in Afghanistan and linked that war to instability in strategically vital Pakistan, coverage increased modestly—to about 2% of the newshole. (Indeed, the period from June 29-July 5 marked the first time since the NCI began that Afghanistan accounted for even as much as 5% of a week’s coverage.)

But starting in late summer, a significant spike in coverage occurred. It began in earnest the week of the August 20 Afghan elections (August 17-23) when the subject filled 10% in the newshole. And in the two months from August 17 through October 11, Afghanistan has accounted for 9% of the overall coverage, making it the third-biggest story in that period, behind only the health care debate (16%) and the economic crisis (10%).

In recent weeks, much of the storyline about Afghanistan has focused on the internal policy debate in the U.S. as Obama began weighing the options for U.S. strategy. And last week, coverage of that debate accounted for about two-thirds of the Afghanistan narrative. Much of it was focused on evidence of disagreements—including those within the administration itself—over whether the increase of about 40,000 troops advocated by General McChrystal is the right approach.

On the October 5 edition of CNN’s Situation Room, host Wolf Blitzer noted, that, “right now, the Obama administration is wrangling over Afghanistan, and it’s looking more and more like a war itself…Today, the Defense Secretary Robert Gates said the president’s next move in the war will be one of the most important decisions he has made and will make, and Gates seemed to push back against the top U.S. military commander in Afghanistan, General Stanley McChrystal, who has been loudly and publicly urging an increase in troop levels.”

The next day’s Los Angeles Times focused on that angle as well, noting that Gates’ response to McChrystal “suggested some disarray in the Obama administration’s attempts to forge a new policy on Afghanistan and underscored wide differences among top officials over the correct approach.”

An ABC News story posted on the network’s web site on October 7 highlighted  partisan differences over Afghanistan policy that seemed to emerge during a meeting between the President and legislators from both parties. The story described the session as “testy” with Republicans voicing support for McChrystal’s troop increase and many Democrats seeming more reticent.

The story also reported that Republican Senator John McCain—Obama’s opponent in the 2008 presidential election and a supporter of McChrystal’s strategy—voiced concern that a decision on Afghanistan could not happen at a leisurely pace. “Obama appeared irritated and shot back that ‘it won’t,’” the story added.

With the time fast approaching for a decision that will be a key test of Obama’s foreign policy leadership, Afghanistan—having finally broken into the headlines in a big way—seems likely to be a significant part of the news agenda going forward.

The Economy and Health Care

The No. 2 story from October 5-11 was the economic crisis, which filled 12% of the newshole, a moderate increase from 9% the previous week. The subject was the No. 1 story (22%) in the one media sector that has consistently devoted the most attention to it—daily newspapers. No single storyline dominated the coverage, but one newsmaking event  was a report that new jobless claims dropped to the lowest level since last January, a silver lining to what has remained a pretty grim unemployment situation.

The week’s third-biggest story was the health care debate (10% of the overall newshole), which generated the most attention in the two media sectors with significant talk show components—15% in radio and 14% in cable. There’s been a lull in coverage in recent weeks as partisan battles and public anger have given way to the nuts and bolts of the legislative process. Last week, the big news was a Congressional Budget Office analysis concluding that the Senate Finance Committee bill would expand health care coverage to more Americans while reducing the deficit by about $80 billion in 10 years—findings embraced by supporters of that measure and health care reform in general.

The Rest of the News

A story that broke late in the week, on Friday October 9, ended up as the fourth-biggest topic at 5%. The news that Obama had become only the third sitting U.S. president to win the Nobel Peace Prize triggered a furious media debate—that broke down largely but not exclusively along partisan lines—about whether it was deserved.

“Reaction in the U.S. and around the globe included a degree of amazement from across the political spectrum, followed by praise from Obama’s admirers and, often, disdain from his opponents,” noted a Washington Post story that called the honor “a stunning decision to celebrate a figure virtually unknown in the world before he launched his campaign for the White House nearly three years ago.”

The No. 5 story last week (also 5%), was news about swine flu, most notably the initial rollout of some forms of the vaccine. One key element of the narrative was the public’s uncertain attitude about getting vaccinated.

A story posted on CNN.com reported that “A recent survey from the Harvard School of Public Health found that just 40 percent of adults say they are ‘absolutely certain’ they will get the H1N1 vaccine. An additional 41 percent said they ‘will not get it,’ and the rest of the sample had varying degrees of certainty.” 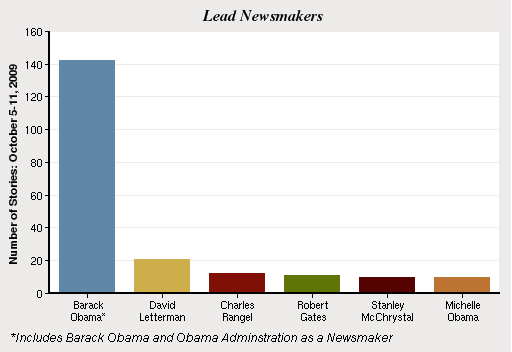 In another sign of the dominance of Afghanistan in last week’s news agenda, three of the  leading newsmakers were principal players in that story. That list was topped by Obama, who was a lead newsmaker in 11% of the stories from October 5-11, a slight increase from the previous week (9%). Defense Secretary Robert Gates and General Stanley McChrystal were the fourth- and fifth-leading newsmakers respectively (at 1% of the stories.)

The second-biggest newsmaker (2% of the stories) was TV talk host David Letterman (he was No. 3 the previous week) who was still dealing with the fallout from the alleged extortion plot that prompted a public admission that he had sex with female staffers. The No. 3 newsmaker (1%) was Democratic Congressman Charles Rangel, Chairman of the House Ways and Means Committee, who is being investigated by the House Ethics Committee as some Republicans called for his ouster from the chairmanship.

Tying McChrystal as the No. 5 newsmaker (also at 1%) was First Lady Michelle Obama. She was in the news last week after the New York Times traced her lineage and found that one of her ancestors had been a young slave girl in the south.