In a week when no one story dominated the media landscape, two big domestic issues, an emerging overseas challenge, a natural disaster and an unnatural crime led the roster of top stories.

Indeed, the leading story last week varied depending on which media sector one visited.

The No. 1 story, for the sixth time in seven weeks, was the health care debate, which filled 14% of the newshole from August 31-September 6, according to the Pew Research Center’s Project for Excellence in Journalism. While coverage was up from the previous week (11%), that still represents a significant drop in attention from the peak weeks earlier in the summer, when political wrangling and angry town hall meetings fueled the narrative.

But the event that actually drove the coverage has not even occurred yet—Barack Obama’s September 9 speech to a joint session of Congress, widely viewed as a pivotal moment for his health care initiative. With that as a backdrop, it is a good bet that coverage of the subject will spike significantly this week.  (Last week’s coverage was fueled by the two talk-oriented media sectors, cable and radio, where health care received roughly double the attention it generated overall, 26% of radio airtime and 25% in the cable shows examined).

Last week’s second-biggest story, at 10%, was the U.S. economy, and the biggest news was a mixed report on unemployment that illustrates how difficult it can be assess the nation’s economic health. The good news was the slowing rate of job loss. The bad news, more eye-catching, was a jump in the unemployment rate to 9.7%, the highest level in more than a quarter century.

Coverage of the financial crisis from August 31-September 6 was down slightly from the previous week when it was 11%, but very much in the range where press attention to the subject has settled in recent weeks. Last week, the economy was the No. 1 story in newspapers, accounting for 14% of the front-page coverage studied.

The No. 3 story also filled 10% of the overall newshole. The raging California wildfires near Los Angeles—believed to be arson—have destroyed scores of homes and charred more than 150,000 acres. They were the top story in the one sector, network news (18% of the airtime), that traditionally devotes the most attention to disasters. Even though it finished among the week’s top five stories, coverage of the current California fires pale in comparison to the massive blazes that struck the state two years ago and accounted for 38% of the newshole for the week of Oct. 21-26, 2007.

With the Obama administration nearing some crucial strategic decisions, the war in Afghanistan was the fourth-biggest story last week, also accounting for 9% of the coverage. That represents the second-biggest week of press attention since the News Coverage Index began in January 2007. (The war filled 10% of the newshole from August 17-23, 2009 when Afghans voted for their president.) 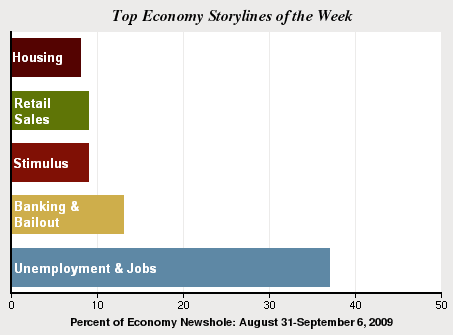 Some of last week’s coverage documented the violence on the ground, including a NATO air strike that reportedly killed dozens of Afghan civilians. But the story was fueled largely by a ramped-up Obama administration debate over whether to send more troops to the conflict as top NATO commander General Stanley McChrystal submitted his strategic evaluation of the situation. One clear theme in the narrative was that U.S. strategy and policy in Afghanistan could be at a crucial turning point. The war was the top story online, at 11%.

And for the second week in a row, the No. 5 story was the saga of Jaycee Dugard (6%), who turned up safely in late August, 18 years after she was kidnapped as an 11-year-old. The case generated the most coverage on network news (11%), and one of the major storylines was that Dugard seemed to be adjusting well to her new life after nearly two decades in captivity. But a number of the press accounts warned this might only represent an upbeat “honeymoon” period for Dugard before other emotions and responses kick in.

Among those in the news, Barack Obama generated the most coverage from August 31-September 6, registering as a lead newsmaker in 8% of the stories. (A lead newsmaker is someone featured in at least 50% of a story). That marks a modest rise from 6% the previous week, when the President was overshadowed by coverage of Senator Edward Kennedy after he succumbed to brain cancer.

The week’s No. 2 newsmaker was Jaycee Dugard (3% of the stories) and she was followed by Phillip Garrido (2%), the man charged, along with his wife, with kidnapping and rape in the abduction of Dugard.  The late Senator Kennedy remained prominent in last week’s coverage as well, registering as a lead newsmaker in 2% of the stories—although that was a dramatic drop from 18% the previous week. And the No. 5 newsmakers (1%) were General Stanley McChrystal and king of pop Michael Jackson, who was buried last week in Forest Lawn cemetery. 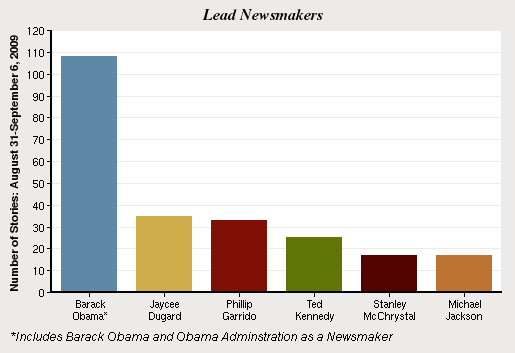