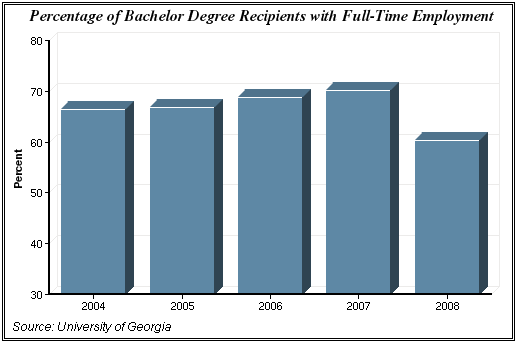 With a deep recession compounding the news industry’s own structural economic crisis, four out of ten journalism and mass communications graduates have been unable to find full time jobs, according to a new survey from the University of Georgia.

The “Annual Survey of Journalism & Mass Communications Graduates”—based on responses from about 2,500 recent grads —found that only 60.4% of the 2008 bachelor degree recipients had landed full-time employment about a half year after graduation. That is not only a steep drop from 2007, when 70.2% had jobs. It also represents the lowest employment level for grads in the 23-year history of the survey.

The news for 2008 graduates was grim across the board. Compared to 2007, employment was down, permanent jobs decreased, benefits diminished, and salaries stagnated. Even the percentage of graduates doing Web-related work fell. Given that environment, it’s perhaps not surprising that the respondents reported lower rates of job satisfaction and a higher level of regret over their career choice. Only one-quarter of them expressed the view that journalism and communications jobs would continue to grow.

“By almost all indications, the 2008 graduates of the nation’s journalism and mass communications programs found themselves in a disastrous job market,” the report concluded.

Lee Becker, a report co-author and the director of the Cox Center for International Mass Communication Training and Research at the University of Georgia, attributes the bleaker employment outlook to “a combination of the collapse of the economy and the undermining of the economic model of journalism.”

Tom Fiedler, the Dean of Boston University’s College of Communication, says “our journalism majors are apprehensive about entering the job market at a time like this, particularly carrying the burden of student loans, as many of them do. In the past year, other than for internships, I haven’t met a single recruiter from a newspaper or TV operation.” 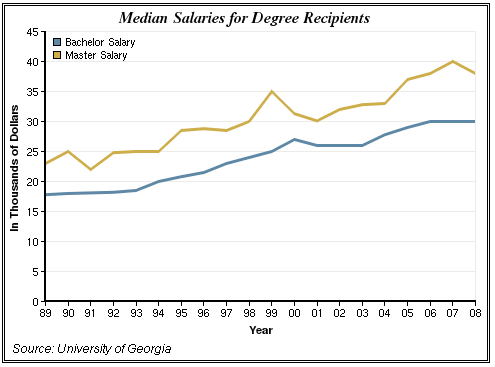 Becker says the survey data do not provide a clear indication of how much of the bad job market can be attributed to the national economic crisis that exploded in September 2008. But the survey of 2007 grads—conducted when the news industry downturn was already widely felt—painted a considerably brighter employment picture than this year’s version. And Becker notes that “the pattern in recent years [had] been that entry level positions had been protected” from the general media slump because “entry level employees are cheap.”

That certainly didn’t seem to be the case for the recent graduates. And even in an era when online news and information is expanding dramatically, the new bachelor degree recipients reported doing less work on the Web. Of the 2008 class, 50.6% said they were writing and editing online compared with 55.6% in 2007, while 17.5% said they were designing and building Web pages, down from 25.1% a year earlier.

While there was some variation based on the communication specialty, the median annual salary for the 2008 bachelor degree recipients was the same as the previous year and 2006—$30,000.(For masters degree holders, the 2008 salary dropped to $38,000 from $40,000 the previous year.) In what might be considered a hint of a silver lining, the report noted that because of deflationary spiral in the economy, “in inflation-adjusted dollars, the bachelor’s degree recipients actually earned slightly more in 2008 than a year earlier.”

When it came to worker benefits, cutbacks were the story, with graduates reporting a decrease in employer contributions to a series of programs ranging from health insurance to life insurance, from disability to dental. For example, 63.4 % of the 2008 bachelor degree recipients said their employer paid for all or some of their basic medical coverage, down from 70.4% a year earlier. (That number was about 80% as recently as 2005.)

The state of the job market seems to be having an impact on student attitudes as well. The percentage of 2008 degree holders saying they wish they had chosen another career jumped to 31.6%, up from 27.2% a year earlier. And 37.2% of the recent graduates said they were “very satisfied” with their jobs compared with 42.1% in 2007—although that is, by historical standards, still a relatively high level of job satisfaction. 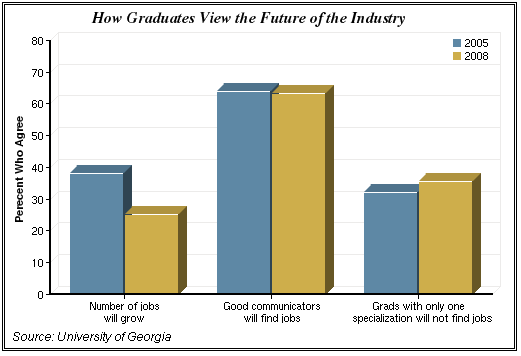 In another sign of increasing concern about their careers, only 25.2% of the grads said they thought jobs in their field would continue to grow. When that same question was asked in 2005, 38% were bullish on the communication industry. On a more optimistic note, the percentage of graduates who felt that good communicators will be able to find jobs remained stable from 2005 (63.9%) to 2008 (63.4%).

That last finding feeds into one other lesson that seems embedded in the survey. With the tough economy and economic turmoil in the news industry, students are becoming increasingly flexible in both their view of the communications business and their professional goals.

The report includes such advice from 2008 degree recipients as “Always have a Plan B or C!” and “Become well-rounded in all aspects of broadcast/web/print mediums. Be versatile.”

For his part, BU’s Fiedler says “I’m hearing from some financially fortunate students that they are planning to go directly on to graduate school—mostly in law or toward an MBA—rather than battle the economic slump…That attitude dovetails with our Journalism Department’s increasing emphasis on touting a journalism major as providing a solid foundation for many professions outside of news rooms.”

“My sense is the students see…the communication enterprise broadly,” adds Becker. “They don’t see a decline of communication, they see an expanding of communication…The data [in the new survey] are more threatening to the professors than the students” who tend to be “more adaptable, more flexible.”