For the second week in a row, health care reform topped the nation’s news agenda, with the legislative battle increasingly portrayed in the press as a crucial test of Barack Obama’s political skills and strengths.

The issue accounted for 19% of the newshole from July 27-August 2, according to the Pew Research Center’s Project for Excellence in Journalism. While that represents a moderate drop from the coverage level in PEJ’s News Coverage Index previous week (when it was 25%), the health care debate, or at least its politics, was the overwhelmingly dominant story on the radio and cable talk shows. In that political polarized element of the media culture, the politics of health care last week accounted for 40% of the airtime studied.

The emergence of health care as the hot topic on the ideological talk shows signals its status as the latest battleground in the young Obama presidency. The subject has triggered the most intense partisan fight in Washington since the $787 billion stimulus package passed in mid-February.

Once again last week, the U.S. economy found itself in its familiar position as the No. 2 story, this time accounting for 14% of the newshole, an amount roughly where it has settled in at.  While the volume was similar, the tone of economic coverage changed. After several weeks of fairly gloomy news about the nation’s financial health, the narrative perked up last week with the release of positive numbers about the housing market that was at the core of the crisis.

The No. 3 story, for the second consecutive week, was the fallout from the arrest of prominent African-American scholar Henry Louis Gates, at 8%. Obama first fueled coverage of the story when he declared, during a July 22 press conference, that the police had “acted stupidly” in the case. Last week, it was the President’s “Beer Summit”—bringing the antagonists together at the White House for a drink and a talk—that drove the narrative, kept the story alive, and made it more a story about political damage control than race.

Coverage of the Michael Jackson saga, meanwhile, revived somewhat last week, with the increasing investigative focus on the late pop star’s doctor making it the fourth-biggest story, at 4% of the newshole.

And a rumor that simply won’t die helped fuel the No. 5 story from July 27-Aug. 2. The biggest component in coverage of the Obama administration (3%) was the “birther” movement, which questions whether Obama is actually a U.S. citizen. One lightning rod in that story last week was CNN anchor Lou Dobbs, and his role in keeping the controversy percolating.

The fight over health care reform was the No. 1 story in only two media sectors last week. But in both platforms—cable news and radio news, it was a subject of major fascination. In cable, it filled almost one third of the newshole (32%), but much of that was due to prime time talk shows (where it filled 39% of the airtime). And in radio, where it accounted for 30% of the newshole, that number was driven by ideological radio talkers, who devoted 42% of the time studied to the subject.

The overwhelming majority of that attention was related to the legislation slowly wending its way through Capitol Hill as well as the politicized debate. And a crucial theme was the challenge that posed for the President, who according to recent polls is losing public support for a major domestic priority.

“President Obama’s ability to shape the debate on health care appears to be eroding as opponents aggressively portray his overhaul plan as a government takeover that could limit Americans’ ability to choose their doctors and course of treatment, according to the latest New York Times/CBS News poll,” declared a July 30 front-page New York Times story. “And despite [Obama’s] efforts—in speeches, news conferences, town-hall-style meetings and other forums—to address public misgivings, 69 percent of respondents in the poll said they were concerned that the quality of their own care would decline if the government created a program that covers everyone.”

With the health care stakes rising for the President, a July 29 Associated Press story focused on his efforts to win the nation’s hearts and minds.

Noting that his “health care vision and political clout [were] on the line,” the story reported that “Obama is using virtually every tool available in a publicity campaign to pressure Congress for swift legislative approval and to rally a public wary of the ongoing Washington tussle over his top domestic priority…With….health care reform legislation proving elusive, Obama again is taking his pitch right to the people [by] traveling to two politically important states that he won last fall after decades of Republican dominance, North Carolina and Virginia.”

Just as the health care politicking intensified, so too did the rhetoric—particularly in the talk show world. On his July 28 radio program, conservative host Sean Hannity went after the idea of a possible tax on cosmetic surgery.

On her July 29 MSNBC show, liberal host Rachel Maddow aired a new ad featuring a man (who looked to be a senior citizen) complaining to his wife that under the proposed plan, “they won’t pay for my surgery, but we’re forced to pay for abortions.”

The message of the ad, opined Maddow, was to convince Americans that “health care reform is really a secret plot to kill old people and to try and make people have more abortions.’

With the talk shows leading the way, the increasingly polarizing health care story stayed firmly atop the news agenda. 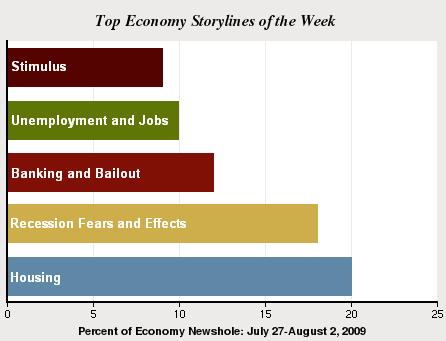 the top story in three sectors, network news (13%), online (18%) and newspapers (21%).  Overall coverage was up slightly from the previous week (12%), when the storylines focused on such matters as California’s budget crisis and concerns that the banking bailout could run up as much as a $24 trillion dollar tab.

But last week, the mood of the narrative brightened, thanks largely to data about improvement in the long-troubled housing sector.

“New figures on U.S. housing sales indicate the housing market may be starting to rebound, and recent sales figures in Spokane and Kootenai counties suggest the local housing market is picking up,” noted a page 1 story in the July 28 Spokesman-Review in Spokane, Washington. “The U.S. Commerce Department said Monday new-home sales rose 11 percent in June to a seasonally adjusted annual rate of 384,000 houses, from a May rate of 346,000, which was higher than previously thought. It was the third straight month of increases.”

The week’s third-biggest story, at 8% (down from 12% the week before) was the aftermath of the arrest of Henry Louis Gates in his Cambridge home. Last week, the big news was the July 30 “Beer Summit” that included Gates, the arresting officer Sgt. James Crowley, Obama and Vice-President Joe Biden. While some coverage focused on the tone of the event—cordial, but no apologies—the choice of beverages became a significant subject in its own right.

One article, posted on the Fox News online site on July 30, expressed some disappointment that Obama (Bud Light) “chose a beer produced by a company that is now a part of the Anheuser-Busch InBev merger, owned by Belgians… Professor Gates is wavering between a choice of Becks (Germany) and Red Stripe (Jamaica). I find it interesting that his selections portray a strong association with branding—Red Stripe is consistent with the idea of the power tie…Sergeant Crowley has selected Blue Moon, a Belgian Style witbier, brewed by Molson Coors. At least his selection is half American.” (For the record, Gates ultimately settled on Sam Adams Light.)

The week’s No. 4 story, the death of Michael Jackson, filled 4% of the newshole, the most coverage for that subject since the week of July 6-12. The narrative last week revolved around Jackson’s doctor, Conrad Murray, whose Las Vegas home was searched by law enforcement agents last week amid increasing speculation that he administered a powerful anesthetic to the singer.

Finally, the “birther” controversy, one fueled by persistent if unfounded rumors that Obama was not born in Hawaii, helped make the administration the No. 5 story, at 3% of the newshole. (In a response to the flap, the U.S. House unanimously passed a resolution affirming that the President is a native of the 50th state.)

Much of the story played out in cable last week, with the spotlight on CNN anchor Lou Dobbs, who has kept the issue alive, even while acknowledging he believes Obama was born in Hawaii. That has generated criticism of CNN and Dobbs from numerous media quarters, with former CNN reporter Brooks Jackson calling it “an embarrassment” for the network and an Associated Press story declaring that Dobbs had become “a publicity nightmare for CNN.”

On her July 27 program, Campbell Brown, whose CNN show directly follows Dobbs’, dismissed the birthers by declaring: “News bulletin—President Obama was born in Hawaii everybody.”

On his July 28 show, Dobbs citing “new developments in the controversy over the president’s birth certificate” responded to some of the critics while reiterating his call for the White House to dispel the controversy by producing evidence of his citizenship.

“I’ve repeatedly stated that President Obama is a citizen of the United States. My question is simply why not provide the long form birth certificate and end all of the discussion…” As part of his story,  Dobbs said reports that the original paper birth certificate documents had been discarded by Hawaii were inaccurate. “Yesterday a spokeswoman for the Hawaii Department of Health said, in fact, that paper birth records have been retained in addition to the department’s electronic records,” he noted. 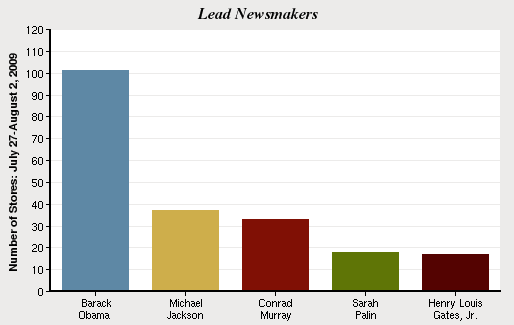 While Obama topped the list of newsmakers from July 27-August 2, he had a relatively modest level of coverage compared with the standard he has set for much of the year. He appeared as a lead newsmaker in 8% of the week’s stories. The No. 2 and 3 slots were filled by two of the principal figures in the Michael Jackson investigation, Jackson himself (3%) and Dr. Conrad Murray (2%).

The week’s fourth-biggest newsmaker was Sarah Palin (1%), who officially relinquished her duties as Alaska governor while continuing to spawn speculation about her future plans. It is worth watching to see if that relatively low number suggests that with her exit from office, she might begin to have more difficulty than some people thought commanding the media’s attention.