Last week, a key Republican senator switched parties, altering the balance of power on Capitol Hill. Barack Obama celebrated his 100th day in office with a prime-time press conference. The chairman of Bank of America was ousted and the Chrysler Corporation declared bankruptcy.

Yet all those stories were overwhelmed by the frantic coverage of a new flu virus that in a matter of days had made its way around the globe and was threatening to become the first influenza pandemic in four decades. From April 27-May 3, the swine flu, or H1N1 as it officially became known, accounted for nearly one-third of the newshole (31%) studied, according to the Pew Research Center’s Project for Excellence in Journalism.

This marked only the second time since January 2007 that a health-related subject led PEJ’s weekly News Coverage Index. That other story, now mostly forgotten, was the potential spread of a seemingly dangerous form of tuberculosis by an Atlanta lawyer, and it filled 12% of the newshole from May 27-June 1, 2007.

The dominant story of the year so far, the economic crisis, fell to No. 2 last week, at 10% of the space studied in print and online and time on television and radio.  That was followed (at 9%) by the Obama administration with the focus on evaluations of the President’s first 100 days. Moderate Pennsylvania Republican Arlen Specter’s defection to the Democrats came next (9%), followed by more bad news from the auto industry (at 8%).

It’s quite possible that in another week, any or even all of those stories might have received substantially more attention. But the possibility of pandemic flu overwhelmed the media as they scrambled to cover various aspects of the story—from epidemiology to human interest, from the growing number of victims to the political fallout. Press attention was so extensive that some of the coverage began examining whether the threat had been overblown and the media’s role in that.

Coverage of the swine flu began showing up two weeks ago, (April 20-26), when it filled 2% of the newshole. But the story did not explode until early last week when the extent of the spread of the disease became clearer. It was the No. 1 story in all five media sectors, but was most dominant on the broadcast network news programs where it filled 43% of the airtime studied last week. It was an even bigger story on the network morning news shows (50% of the newshole) than in the evening (36%).

While cable news is often cited as the sector that provides wall-to-wall coverage of major events, the emphasis on the flu in the traditional three broadcast networks is in keeping with their editorial priorities. For all of 2008, network television news devoted a higher percent of its coverage to health issues than any of the other media platform. That may reflect, to some degree, an audience that skews older in the evening and female in the morning.

that materialized out of the blue. And that coverage expanded so rapidly that toward the end of the week, a backlash against perceived press excess began to materialize.

A story in the New York Times, for example, said medical professionals applauded the idea of widespread public education, but also expressed the view that “without saturation coverage on cable news networks and the velocity of information on the Internet, the public would not be so hysterical.”

Some of last week’s coverage focused on how travel and commerce has shrunk the global village since the last flu pandemic in 1968. Other stories examined the big advances in medical science since that outbreak. But the week’s narrative also reflects how much the news universe has expanded and accelerated since 1968 when the World Wide Web was about 20 years from fruition and cable news was a gleam in Ted Turner’s eye.

In this hyperactive and fast-moving media environment, a good portion of last week’s coverage was devoted to the rapidly changing numbers in the crisis. Typical of that was the banner headline atop the April 28 edition of the San Jose Mercury News: “13 cases confirmed in California, more likely.”

Another grim milestone that spurred considerable attention was the first reported death in the U.S., a 23-month old child who had traveled from Mexico. “The flu death was confirmed…by Dr. Richard Besser, acting director of the Centers for Disease Control and Prevention, during an interview with CNN,” said the April 29 story posted on USAToday.com. “Besser went on to say on NBC’s Today show that it’s too soon to say if the death in Texas suggests the virus is spreading to more states.”

But much of the media attention went beyond the rising number of cases as journalists riding a big story tried to find ways to flesh out the coverage. The answer often seemed to be the proverbial human interest angle.

On April 27, ABC’s Good Morning America opened with an interview of the Henshaw family of Texas, which was under voluntary quarantine after the flu struck. “We’re doing good,” the mother, Robin Henshaw, told ABC’s Robin Roberts as the family sat around in surgical masks. “We’re just hanging in there…I’m washing my hands a lot, using a lot of Lysol and we’re taking Tamiflu.”

By the middle of the week, the media had already tracked down someone who became known as “patient zero,” a five-year old Mexican boy who represented one of the first cases of the virus. “One person who may have helped launch a rapidly spreading flu outbreak likes to draw hearts and flowers in the dirt outside his home,” stated the April 29 Washington Post story. “He likes to climb trees and give hugs and play with his soccer ball. And despite a persistent cough, he does not, he insists, feel sick.”

Later in the week, one aspect of the story became the somewhat nervous reaction of one American in particular, the Vice President. Appearing on the April 30 Today Show, Joseph Biden said, “I wouldn’t go anywhere in confined places now,” and seemed to be warning Americans not to fly or use public transportation.

Much of the commentary unleashed by that statement concluded that the gaffe-prone Biden had strayed far from the Obama administration’s message that tried to carefully blend concern with calm. “Any White House official…is going to have to really walk a fine line between erring on the side of caution and containing public hysteria,” declared analyst Reva Bhalla on Bill O’Reilly’s Fox News Channel program. “So naturally a statement [like Biden’s] is going to attract a lot of attention and further that hysteria.”

A day later, on May 1, a New York Times front-page story reported that many Americans were taking steps—such as avoiding touching elevator buttons—that “appeared to be overreactions.”

“In some places, doctors said they had been overwhelmed with patients, some of which insistently sought tests for swine flu though they showed nothing of the fever and cough consistent with it,” the story continued.

It is a measure of the swift trajectory of the story that in less than a week, the narrative began shifting from a feverish casualty count to warnings that panic might be trumping reason.

The Big Stories that Got Lost Last Week

The second-biggest story from April 27-May 3, well back at 10%, was the ongoing economic crisis. It gen 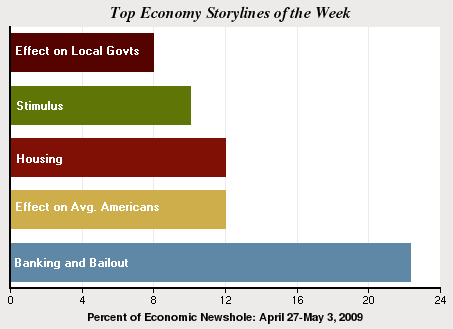 erated its highest level of attention (17% of the newshole) in the newspaper sector. The leading storyline involved the financial sector—including news that Bank of America chairman Ken Lewis had been voted out by shareholders and that Congress was looking at tougher regulation of the credit card industry.

That topic was followed (at 9%) by coverage of the Obama administration driven by his 100-day anniversary. (The story generated the most attention online, where it accounted for 12% of the newshole.) One favorite media pastime last week was assigning grades to the new President. MSNBC’s Chris Matthews told Jay Leno that Obama deserved an A minus while Fox’s O’Reilly was a somewhat tougher marker, giving the President a B on the economy and a C on foreign policy.

The No. 4 story, at 9%, was about “Specter the Defector,” to quote the headline on a David Broder column. The Republican Senator’s party shift—which could potentially give Democrats a filibuster-proof 60 votes—generated the most attention on cable news (15% of the time studied). One focus of the coverage was the impact on the GOP, igniting a debate over whether the party should broaden its appeal or opt to rebuild through a more ideologically homogeneous approach.

And the fifth-biggest story, 8% of the overall coverage, was more bad news out of Detroit, with word that debt-ridden GM was dropping its Pontiac Michigan plant and that hard-hit Chrysler was filing for bankruptcy. Obama declared that the move represented “one more step on the path to Chrysler’s revival.” But the tone of coverage, which included an Associated Press photo of Chrysler workers trudging out of a Michigan plant, was far grimmer. 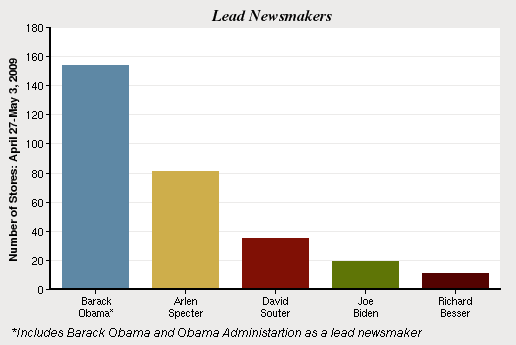 For the week of April 27-May 3, Obama was again the top headline generator, appearing as a lead newsmaker in 12% of the stories. The No. 2 newsmaker (6%) was Specter who shook up Washington when he crossed over the aisle to join the Democrats. He was followed by retiring Supreme Court Justice David Souter (3%), the quiet New Hampshire jurist who had surprisingly morphed into one of the court’s more consistent liberals.

The fourth and fifth-leading newsmakers, both at 1%, were two men who generated swine-flu related attention. One was Vice President Biden and the other was Richard Besser, the acting director of the Centers for Disease Control, who during his many media appearances, became the public face of the U.S. response to the virus.