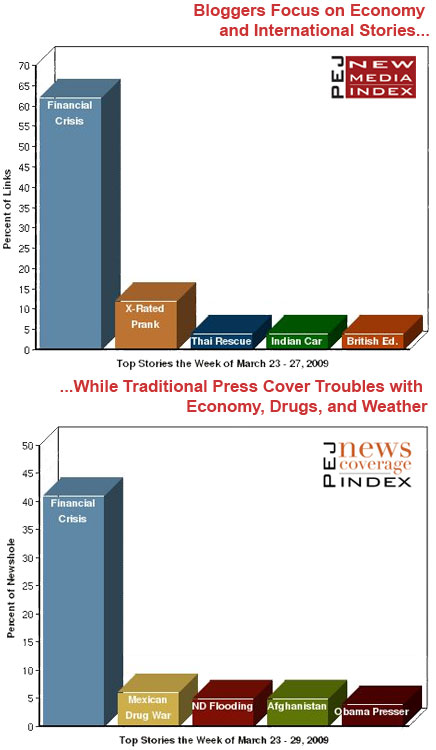 Following a week of focused outrage over the AIG bonuses, the economy still dominated social media. But after picking up with the latest AIG developments, the blogosphere, the week of March 23-27, moved into other areas of the economic crisis-including criticism from some on the left of President Obama.

The economy overall was the subject of 62% of the most linked-to stories by blogs and social media sites, according to the New Media Index from the Pew Research Center’s Project for Excellence in Journalism. This was down only slightly from the previous week (65%).

The next four largest subjects online were all international events, although the topics and tone differed greatly.

The second-largest story, at 12% of the links, was of a much less serious tenor, a prank a British teenager played on his parents. The 18-year-old painted a 60-foot version of a distinctive part of the male anatomy on the roof of his parents’ mansion. Remarkably, no one discovered the painting for a year.

This is the second time a strange practical joke made the list of top blogger stories since PEJ began tracking social media in January. From January 26-30, a story about hackers who changed a road sign in Texas to warn of a "zombie attack" was the No. 2 topic.

Following this, three other stories in the social media universe that each garnered 4% of the week’s links.

One of them was a moving account of a Bangkok fireman who dressed up as Spider-Man in order to coax an autistic child off of a dangerous window ledge. Another was a report about the launching of the Tata Nano, a car made in India that will be the cheapest in the world. The 10-foot long automobile will have five seats and cost the equivalent of about $2,000.

Finally, a report in the Guardian about a proposal to change Britain’s primary school education curriculum garned 4% of the links. The plan would include more modern web-based skills such as the use of internet sites like Twitter and Wikipedia, focus more on environmental education and give teachers more flexibility in deciding what to teach.

The dominance of the economy in the blogosphere was greater than in the traditional media last week (41% of the newshole). But none of the five top online stories outside of the economy registered much attention at all in the traditional press last week according to PEJ’s News Coverage Index. The rest of the week’s top five stories in the mainstream press were the Mexican drug war, flooding in North Dakota, the war in Afghanistan, and Obama’s March 24 press conference.

These are some of the findings of the PEJ’s New Media Index for the week of March 23-27. The index is an effort to monitor the content appearing in new media platforms. The biggest element of this Index is what appears in the more than 100 million blogs and other social media web pages concerned with national news and public affairs tracked by two monitoring sites, Technorati and Icerocket. Both track the commentary online by identifying what news stories bloggers and other websites link to. Each weekday, PEJ captures the top linked-to stories and analyzes their content. It then compares those findings with the results of its weekly analysis of more mainstream media, the weekly News Coverage Index. The Project also tracks the most popular news videos on YouTube each week.

Among the elements of the economy dissected last week in social media, was a letter in the March 24 edition of the New York Times from Jake DeSantis, an executive vice president of AIG. The letter received so much attention that by March 27, more than 500 blogs had linked to it, according to Technorati–the highest amount of links any individual story had received on a given day since PEJ began the New Media Index.

In the letter, DeSantis felt betrayed by AIG’s chief executive Edward Liddy and announced his resignation. DeSantis wrote that he had nothing to do with the credit default transactions that had damaged the company and that the bonus money was contractually obligated to him as compensation for his work. He then suggested he would keep the bonus and donate it to charitable organizations.

For many, DeSantis’ letter put a human face on the frequently reviled employees of AIG.

"Reading this letter will allow citizens to see through politicians’ and the media’s attacks on all AIG executives," explained Adam Scavette at adamsmith.org. "Not every employee is responsible for this crisis, and most of those still remaining are trying to re-stabilize the company…Whether you agree with the bonuses or not, we need not demonise all executives."*

Yet for others, the letter did not ease outrage over the AIG bonuses.

"Mr. DeSantis, let me say how happy I am that you quit," declared Stephen Suh at Cogitamus. "I hope your former colleagues follow your example, because in rating your performance over the last few years, there are only two choices: criminal or criminally incompetent. Either way we’re better off without you than with you."

Krugman’s March 22 article criticized details of Obama’s plan to rescue troubled banks because it relies on bankers to fix the mess many had helped create.

"Like many Obama-Krugman groupies, I find myself torn," admitted Steven C. Day at The Last Chance Democracy Café. "My instincts tell me to trust Barack Obama’s bank rescue plan: underestimating him, after all, generally proves to be a mistake. Yet, when it comes to economics, for me, Paul Krugman’s the man."

Other bloggers felt Krugman was right on the mark.

"If you have the nagging feeling that the Geithner-Obama plan to alleviate banks of any responsibility for their own mismanagement, stupidity, and criminality…is unseemly or even bad policy, well…some Nobel Prize winning economists are right there with you," commented DM at nunal.blogspot.com.

Rich’s March 21 column, on the other hand, which asked if Obama’s difficulty with handling the economy and the AIG bonuses was going to be his "Katrina moment" elicited mostly angry responses.

"To conflate the executive bonuses with Katrina is grotesque, and Rich knows better," responded T.A. Barnhart at BlueOregon. "To equate the Obama Administration’s handling of the bonuses with Bush’s handling of Hurricane Katrina is shameful. Bush sat back and let people die. Obama is taking action on the economy; it’s just not the action a lot of people want him to take."

Another angle of the economy discussed, primarily by conservative bloggers, was a March 24 Washington Post report that the Obama administration was considering a plan to allow the U.S. Treasury to seize greater control of failing insurance companies, investment firms and hedge funds.

"In addition to spending trillions, printing massive new amounts of cash and trying to tax every aspect of life, President Obama wants the Secretary of the Treasury to become CEO of the USA…This is a terrible idea," declared Brian Darling at RedState.com.

While the top story of the week involved the most pressing public policy issue of the day, the No.2 story was a different matter altogether.

On March 24, the BBC posted a short story on the Newsbeat section of its Web site consisting of a picture and only three sentences. However sparse the account, the tale of an 18-year-old boy who secretly painted a 60-foot image of a male body part on the roof of his parents’ mansion certainly sparked some interest-and even admiration.

The 12% of all the linked to stories, has been typical of many second or third ranked stories in this index. The controversial policy changes at Facebook and the ailing newspaper industry, for example, both received similar percentages.

"This is freakishly brilliant. Also, slightly immature," wrote eliander. "But all the better for that. It’s making me inordinately happy. I’m like a 5 year old."

And others were grateful for some comic relief from that worries of the world. Yasha at Heeb Magazine wrote, "The image was up for a year before the kid’s parents found out. It’s these little things that make life’s hiccups – a bleak economy, climate change and missing an episode of Gossip Girl – just a bit more bearable."

The most viewed news videos on YouTube last week had some repeating themes including a FedEx jet crash and Obama’s sit-down with Jay Leno on the Tonight Show. But with more than 1 million views, the most popular video was of Daniel Hannan, a conservative British politician, delivering a sharply worded speech in Parliament against the country’s Prime Minister. Hannan criticized Gordon Brown’s handling of economic policy, concluding that Brown had become "The devalued Prime Minister of a devalued Government." Hannan’s speech quickly became an Internet sensation.