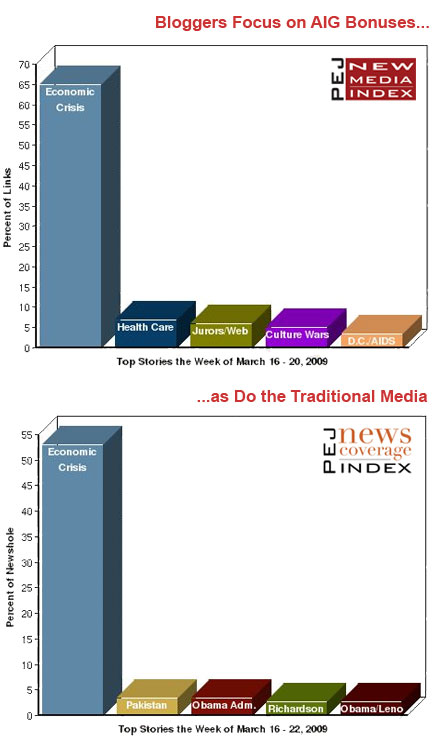 While the news agenda of bloggers often differs from that of the traditional press, there was no such divide last week when it came to $165 million in bonuses paid by insurance giant AIG.

Outrage over AIG-which has received about $180 billion in bailout funds-dwarfed all other subjects in the social media last week, just as it did in the mainstream press. And as was the case with reaction in the traditional media, the vast majority of online commentators expressed anger over the bonuses while a small minority voiced support.

That discussion made the economic crisis overwhelmingly the top subject for bloggers, accounting for 65% of the most linked-to stories by blogs and social media sites from March 16-20, according to the New Media Index from the Pew Research Center’s Project for Excellence in Journalism.

The dominance of the economic crisis was even greater here than in the traditional media last week (53% of the newshole) and generated the highest level of attention for any story  in the New Media Index since PEJ started tracking online discussions two months ago. Links about the economy last week edged out President Obama’s inauguration, which made up 63% of the links from January 19-23.

The next three largest topics online were a mix of policy and politics. The subject areas ranged from health care to Internet use to conservative culture wars, but all drew on the New York Times or Washington Post as their source.

The second largest story, at 7% of the links, was a New York Times report  that Obama might support taxing of health care benefits, despite the fact he had opposed a similar concept during his campaign.

Third (at 6%) was another New York Times article detailing the problems that the legal system is having with jurors who use the internet while serving – either as a research tool or to post updates on sites such as Facebook and Twitter.

The fourth story online (at 5%) was an opinion piece from New York Times columnist Frank Rich in which he argued that many of the culture wars that Republicans embraced  during the George Bush years have faded from the forefront of the country’s attention.

Rounding out the top five (at 3%) was a Washington Post article that reported that the HIV/AIDS rate in Washington, D.C. had reached 3% of the population and is considered a severe epidemic.

None of the five top online stories outside of the economy registered much attention at all in the traditional press last week according to PEJ’s News Coverage Index. Instead, the top non-economic stories in the mainstream press were internal developments within Pakistan, continued attention to Obama’s approval ratings and administration, the sudden death of actress Natasha Richardson, and the President’s March 19 appearance on the Tonight Show with Jay Leno.

These are some of the findings of the PEJ’s New Media Index for the week of March 16-20. The index is an effort to monitor the content appearing in new media platforms. The biggest element of this Index is what appears in the more than 100 million blogs and other social media web pages concerned with national news and public affairs tracked by two monitoring sites, Technorati and Icerocket. Both track the commentary online by identifying what news stories bloggers and other websites link to. Each weekday, PEJ captures the top linked-to stories and analyzes their content. It then compares those findings with the results of its weekly analysis of more mainstream media, the weekly News Coverage Index. The Project also tracks the most popular news videos on YouTube each week.

Almost immediately after reports about the bonuses paid by AIG became public, online reaction was overwhelmingly angry and often sarcastic.

"We’re used to seeing astounding levels of gluttony and complete callousness towards the average American by big shots from corporations like AIG. But this is enough to take one’s breath away," exclaimed Mike Van Klompenga at Media Mouse.

"You’ve just spent the past year ethering your company stock from an all-time high of $100/share to less than the price of a pack of Bubblicious," deliberated AverageBro.com. "You needed the gubb’ment to come in and bail you out of your fiscal irresponsibility…So what do you do to celebrate this year of misfortune? Why, pat yourselves on the back and hand out $165M in bonuses of course!"*

"Where can I sign up for the job where I can completely screw up and still get a big bonus?" asked a commenter on the ABC News blog. "Everywhere I work requires me to prove I am the best and the brightest at my job before they give me extra money. I must not be looking for the right places to work."

Another line of discussion was fueled by a March 16 New York Times story by Andrew Ross Sorkin offering the contrarian view that the bonuses were contracts with the employees, and not paying them would be lead to worse consequences. "Despite how offensive and painful it might be," he concluded, "let’s honor the contracts."

John Cook at Gawker.com countered, "Most defenders of the $165 million in taxpayer funded bonuses to AIG executives argue that a contract is a contract is a contract, and that to simply tear up existing bonus agreements…would be unfair. But that one doesn’t hold much water for the rabble sharpening their guillotine blades,"

Some liberal bloggers wondered why the contracts issued by AIG were perceived as unbreakable while others, such as those with labor unions, were not as ironclad.

"When Detroit’s Big Three arrived in Washington last year to plead for federal bailout funds, the right wing demanded that the United Auto Workers ignore their contracts and accept ‘steep cuts in pay and benefits’" pointed out Ali Frick at Thinkprogress.org. "But it’s still clear that while workers’ contractual benefits can be eviscerated in the name of bailout eligibility, millionaire bankers’ bonuses are a more sacrosanct part of ‘a country of law’ where ‘there are contracts.’"

Although a distinctly minority view, some bloggers agreed that the bonuses should be paid and that the outpouring of anger was misguided.

"We bailed them out, and now it’s in the interests of the entire country that this company succeed so that we can get our money back. Like it or not, the best people to accomplish that are the people who received these bonuses," argued Doug Mataconis at Below the Beltway.

Some of the discussion about AIG spilled over to the political impact on Obama. The Washington Post published a March 17 story claiming that the anger over the bonuses was "threatening to derail both public and congressional support for his ambitious political agenda."

But, according to Charles Lemos at Direct Democracy, the Post story was "a bit a on the hyperbole side, if you ask me."

And amid all the passion triggered by the bonuses, one blogger suggested the President try a little old-fashioned parental discipline

"Moms…know how to deal with poorly behaving children," offered Andrew Samwick at Capital Gains and Games. "There is no better metaphor for the conduct of these financial firms. I urge President Obama to fill all the vacancies at Treasury with moms of young children."

Despite the outpouring of sentiment about AIG, some bloggers last week also discussed a phenomenon the New York Times referred to as "Google mistrials" in which several legal cases have been thrown out because jurors used the internet to conduct research or posted updates on social networking sites like Twitter.

As one commentator noted, advances in technology also come with potential pitfalls.

"If your next tweet involves a court case that you’re privy to, a new job, criminal activity or something that might get your name printed in The New York Times," warned Patricio Robles at Econsultancy.com, "think twice before hitting that ‘update‘ button. It’s more twouble than it’s worth."

The most viewed news video on YouTube last week was an unedited and unfiltered video of the chaos that ensued outside a March 14 casting call in Manhattan for the reality television show "America’s Next Top Model." According to reports, a nearby car overheated and many of those waiting in line feared a bomb had gone off. Several people were injured during the incident and three were arrested for disorderly conduct.