Last week, the media narrative for a complex economic crisis got much simpler. The coverage focused on one corporate villain and one angry public. 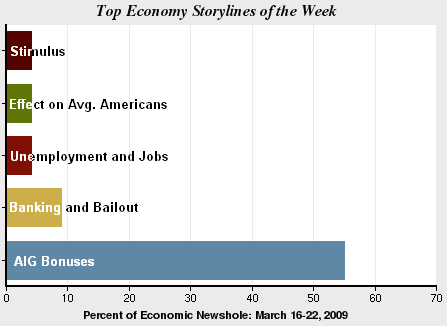 With news of the AIG bonuses driving that narrative, the economic crisis generated its highest level of weekly coverage to date. From March 16-22, it filled 53% of the newshole according to the Pew Research Center’s Project for Excellence in Journalism. That not only marks a major increase over the previous week (35% of the newshole). It is the highest level of weekly coverage for any story other than the 2008 presidential campaign since PEJ started its News Coverage Index in January 2007.

As further evidence of the week’s lopsided news coverage, the No. 2 story, turmoil inside Pakistan, was all the way back at 3% of the newshole.

The catalyst for last week’s news agenda was the revelation that failing insurance giant AIG—which had received about $180 billion in bailout funds—was paying out $165 million in bonuses. As fallout spread from Capitol Hill to the Connecticut homes of AIG officials, the bonus story accounted for more than half the economic crisis coverage. And the overarching theme was outrage.

“A.I.G. is a P.I.G.,” shouted the front page headline of the New York Daily News as a U.S. Senator suggested the company’s executives either resign or “go commit suicide.”

There were some alternative voices in the press, such as the New York Times’ Andrew Ross Sorkin who wrote that, “Maybe we have to swallow hard and pay up, partly for our own good.” But that view was eclipsed in coverage that also tried to assess the collateral political damage, particularly to President Obama and his beleaguered Treasury Secretary Tim Geithner.

In one clear marker of how thoroughly the AIG story permeated the media landscape, Tonight host Jay Leno had barely exchanged pleasantries with Obama on his March 19 show when he dove straight into the subject. “I know you are angry — because, you know, doing what I do, you kind of study body language a little bit,” he told Obama. “And you looked very angry about these bonuses. Actually, stunned.”

In recent weeks, coverage had been spread quite evenly among a number of components of the economic meltdown. Those elements included the credit crunch/banking bailout, stock market vacillations and the continuing debate over the stimulus package. Some of the crisis coverage has also focused on potential villains, a roster that ran from former Merrill Lynch CEO John Thain to CNBC’s Jim Cramer, who was skewered by Daily Show host Jon Stewart.  But last week, it homed in on  a singular symbol of anger and angst about the depth of the meltdown—AIG. The storyline involving the giant insurance company accounted for 55% of all the financial coverage. The last time one element of

the crisis was that dominant was in mid-February when the stimulus package passed and accounted for 58% of the coverage. The next biggest storyline behind AIG last week was the financial bailout and credit squeeze, at 9%.

The week began with a swift and noisy reaction to the March 15 news that AIG was paying out the employee bonuses. In a March 16 story citing growing pressure on the company, the Los Angeles Times reported on some of that vox populi.

“Readers were angry after reading a Times story Sunday on the bonuses and the administration’s grudging acknowledgment that most of them must be paid,” the story noted. “‘Paying the creeps, I don’t care on what level they are on, is nuts!’ Rola Cook of Molalla, Ore., wrote in an e-mail. ‘Let ’em go to court. Let ’em sue. Let ’em go to hell!’”

The next evening, after NBC anchor Brian Williams introduced the “story behind the outrage that is AIG,” the newscast gathered reaction from around the country. The AIG bonuses feel “more like a sting in the behind,” noted a man in Libertyville Illinois. AIG executives “should just get out,” declared an equally angry citizen in Des Moines.

By the middle of the week, some of the coverage had shifted to the culpability for the bonus fiasco. As pressure mounted on the administration, the March 18 Washington Post led with the White House version of events.

“Senior White House officials said last night that President Obama did not learn that bonuses worth $165 million were to be paid to executives of American International Group until Thursday, one day before they were issued and two days after his Treasury secretary was informed that the payments were going forward,” the story stated.

On Anderson Cooper’s March 18 CNN show, correspondent Dana Bash reported that “CNN [had] solved the mystery” of those who were involved in the legislative “loophole” that allowed the AIG bonuses to go through.  “It was the Obama Treasury Department and Senator Chris Dodd,” Bash declared.

With anger and frustration boiling over, the U.S. House moved quickly to pass a 90% tax on the payouts, a move that opened a new line of media inquiry.

“The House takes a butcher knife to the AIG bonuses, carving them up with a huge new tax,” declared Bret Baier on his March 19 Fox News Channel newscast. “But is it Constitutional?”

Some of the coverage, such as on ABC’s World News Tonight, wondered whether it was misplaced and even unwise for Congress to tax the bonuses and perhaps discourage people from participating in the bailout.

Politically, however, the anger was something politicians seemed to want to get in front of before it rolled over them.  That same night, in an attempt to defuse some of the outrage and make his case to the public, Obama went on NBC’s Tonight show where a main topic of discussion was AIG and the economy. But any political benefits Obama might have accrued from the Leno visit may have been negated from a mini-furor that erupted when he poked fun at his bowling ineptitude, saying it “was like Special Olympics, or something.”

Obama’s forays into the sports world last week seemed to yield, at best, mixed results. The President unveiled his NCAA tournament picks on ESPN, opting for North Carolina over Louisville in the championship game—a bracket that led some to point out Obama’s proclivity for safe picks. On his web site, Matt Drudge seized on the political angle by linking to an AP story citing Duke coach Mike Krzyzewksi’s view that Obama had his priorities wrong. “DUKE COACH SLAM DUNKS OBAMA: FOCUS ON ECONOMY NOT NCAA PICKS,” was the banner headline on the Drudge Report.

But if Obama had a rocky go in the press, it paled in comparison to the treatment of AIG. By the weekend, the media were reporting on bus tours ferrying protestors to the homes of AIG executives in ritzy Fairfield Connecticut. The New York Times covered one such protestor, pastor Mary Huguley, who was turned away in her effort to personally deliver a letter to an AIG official.

“They’re all about themselves,” Huguley said. “The more they can get, the more they want.” 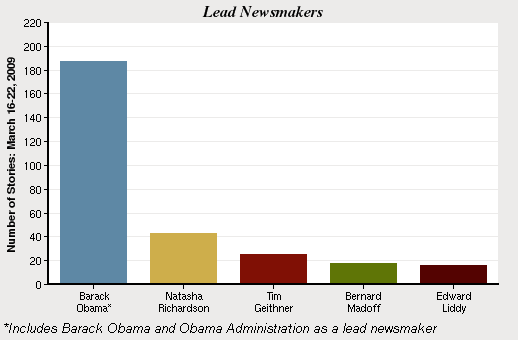 The economy’s dominance of the news agenda was reflected last week in four of the top five newsmakers.

No 1 was again Obama, who was a lead newsmaker in 14% of the week’s stories. The No. 3 newsmaker was Treasury Secretary Tim Geithner, at 2%, followed by Bernie Madoff (1%), the jailed swindler in a $65 billion Ponzi scheme who has become another symbol of largely unregulated chaos in the financial world. The fifth-biggest newsmaker was Edward Liddy (also 1%), the AIG CEO who was grilled by Congress last week.

The week’s second-biggest newsmaker was actress Natasha Richardson (3%), who died of brain trauma several days after falling on the beginner ski slopes at a Canadian resort. The stunning death of Richardson after what appeared to be a fluke accident generated considerable attention as did her noteworthy and grieving family. The wife of actor Liam Neeson, Richardson was also the daughter of actress Vanessa Redgrave.

Last week, the No. 2 story generated about one-eighteenth as much coverage as the economic crisis. Events in Pakistan accounted for 3% of the newshole, and the big news was the reinstatement of Pakistani Chief Justice Iftikhar Chaudhry after major protests. The third-biggest story, also at 3%, was the new Obama Administration, with the President’s relatively steady approval ratings sharing headlines with Michelle Obama’s White House vegetable garden.

The No. 4 story, at 2%, was the death of Natasha Richardson, an event that generated the most attention (6% of the newshole) on network television news. Finally, the fifth biggest story (at 2%), was Obama’s March 19 appearance with Leno. 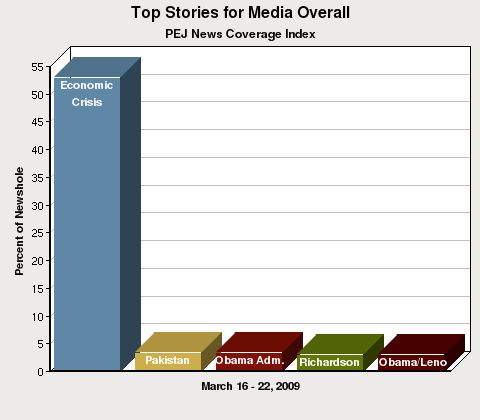 During that interview, Obama tried some levity by declaring that the intense scrutiny of his administration in Washington is “a little bit like ‘American Idol,’ except everybody is Simon Cowell.”

But it was Leno who may have best captured the mood of the week with this riff on the news that AIG is asking executives to give back part of their bonuses.

“I had to laugh the other day when the CEO of AIG said, ‘okay, I’ve asked them to give half the bonuses back,’” he said.  “Now, if you rob a bank and you go into court and you go, ‘your Honor, I’m going to give you half the money back.’ And they seem stunned that we’re not jumping at this wonderful offer.”