A man who had trouble getting the media 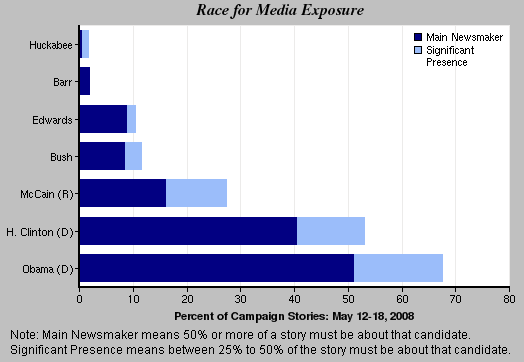 to pay attention to his presidential bid finally generated a lot of headlines last week. When he showed up to endorse Barack Obama at a Michigan rally on May 14, John Edwards not only made news, he helped change the story line.

The splash was substantial. After backing his former rival for the Democratic nomination, by week’s end Edwards was a dominant or significant figure in 10% of the campaign coverage, according to PEJ’s Campaign Coverage Index for May 12-18. That is more coverage than the former Senator managed to attract in three of the four weeks in January when he was still a candidate—and more than he got the week he dropped out.

And in embracing Obama less than 24 hours after Clinton’s big win in West Virginia, Edwards diverted media attention away from a discussion of renewed Clinton momentum and helped refocused the narrative on Obama’s apparent inevitability.

In doing so, Edwards also helped Obama win the race for exposure last week. Overall, Obama was a significant or dominant newsmaker in 68% of the campaign coverage, well ahead of Clinton, who finished at 53%. And their coverage was very different. Despite her 41-point win in West Virginia, her narrative included considerable speculation about how long she would stay in the race and whether she might end up as Obama’s vice president.

Despite a West Virginia trouncing that might have deepened questions about Obama’s appeal to working-class whites, his narrative last week continued a theme that had emerged the previous week. Obama was depicted as shifting away from a primary contest toward a general election strategy. Not only was that story line reinforced by Edwards’ endorsement, it was bolstered by President Bush’s May 15 remarks in Israel criticizing “appeasement” that Obama saw as a direct attack. Obama responded with sharp criticism of Bush and McCain that seemed to offer a preview of the general election fight. For his role in that foreign policy dustup, the President registered at 12% in last week’s campaign coverage, his largest role in any week’s campaign narrative since PEJ began tracking that role.

If one were to combine the top four story lines in last week’s campaign coverage—the appeasement furor (21% of all the campaign stories), the Edwards endorsement (10%), calls for Clinton to drop out (6%) and speculation about Obama’s vice-president (2%)—that’s almost 40% of the coverage reinforcing the idea that the Democratic primary race was over. 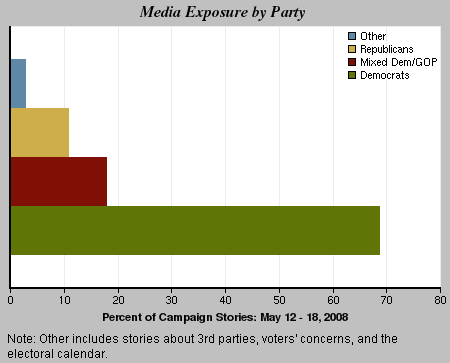 On the Republican side, McCain, who was caught in the Bush-Obama crossfire, was a significant or dominant factor in 27% of the coverage last week, far behind the Democrats. Nonetheless, that was still his highest level of press attention since April 7-13. Part of it came from a speech anticipating the end of his first term in which the GOP candidate predicted victory in Iraq, the killing or capture of Osama bin Laden and economic growth at home.

Meanwhile, another Republican (or former Republican) got some coverage last week. Bob Barr, the former GOP Congressman from Georgia, announced his presidential candidacy on the Libertarian ticket. That triggered some speculation about whether he could siphon some support from McCain. So far, the early signs are not that promising. Barr registered at 2% in the coverage, a sign perhaps that the media does not expect him to have much impact.

In all, the presidential campaign accounted for 37% of the overall newshole, according to PEJ’s News Coverage Index for the period of May 12-18. Despite a number of significant breaking events, including the devastating earthquake in China and the continuing destruction from the Myanmar cyclone, the race for the White House consumed 74% of the airtime studied on the cable news networks last week, fully twice as much as in the media generally. The next-biggest story, the disaster in China, filled only 4% of the cable newshole even as it proved to be the No. 1 story (at 21%) on network television broadcast news. 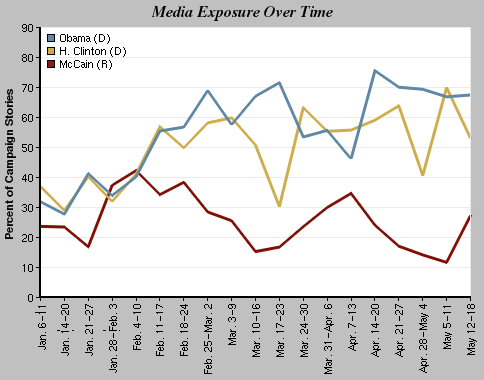 The week began with the media signaling that the long Democratic primary fight was finally giving way to a general election contest between Obama and McCain. “Obama and Clinton are no longer fighting the same fight,” declared MSNBC host David Gregory on May 12. To prove the point, MSNBC aired footage of Hillary Clinton declaring West Virginia a crucial Democratic battleground while Obama delivered a speech about veterans and patriotism and had “his eye on the general election.”

And Clinton’s whopping West Virginia win over Obama did not play out in the press the way her campaign had hoped. A May 14 AP story carried on Yahoo News! said the result did “expose in stark terms his disadvantage with blue-collar voters, fueling Clinton’s last-gasp argument to party VIPs that she’s the Democrat with broad appeal against Republican John McCain.” But it also reported that right after the primary, “Obama picked up two more superdelegates, offering fresh recognition from Democratic leaders of his inevitable nomination.”

The next morning on NBC’s Today show, it was the Edwards endorsement that obscured the West Virginia vote. “Just as she was trying to get back on her feet, Hillary Clinton had the rug pulled out from under her,” reported correspondent Andrea Mitchell. She noted that the move not only raised the possibility of Obama collecting Edwards’ delegates and improving his standing among blue-collar voters, it also succeeded in diluting the impact of a series of TV interviews that Clinton had granted.

“This,” Mitchell intoned, “is the moment Hillary Clinton had hoped would not happen.”

By the end of the week, the story was not Obama versus Clinton, but instead Obama versus Bush and McCain. The May 16 CBS evening newscast led with a report from correspondent Dean Reynolds that Obama had delivered “one of the most pugnacious speeches” in his career in response to Bush’s statement criticizing “appeasement” of terrorists and radicals. The CBS account featured excerpts from Obama’s speech in which he said that “both Bush and McCain represent the failed foreign policy and fear-mongering of the past.”

In introducing that segment, anchor Katie Couric told viewers, “It is only May in this campaign, but it’s beginning to feel like October.” For an Obama campaign intent on sending a strong message that the primary fight is over, that media narrative is music to their ears.

For the second week in a row, a deadly natural disaster was the second-biggest story of the week, behind the campaign for the White House. The Chinese earthquake, that to date has reportedly killed more than 30,000 people, accounted for 13% of the coverage for the week of May 12-18, as measured by PEJ’s News Coverage Index. The Myanmar cyclone, which generated 15% of the previous week’s coverage, fell to 4% last week, but was still the No. 3 story. Coverage of same-sex marriage, sparked by a California Supreme Court ruling allowing those unions, was next at 3%. That was followed by concerns over the rising price of gas and oil, also at 3%.