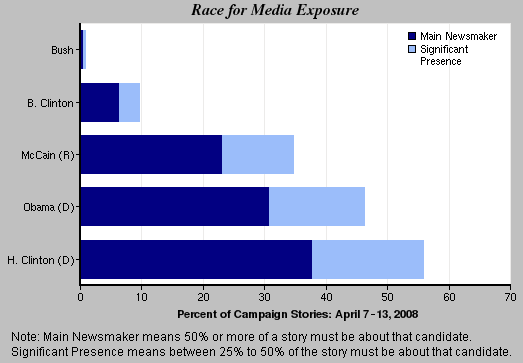 Hillary Clinton and Barack Obama in the competition for media exposure last week. But when it came to the press narrative, the presumptive GOP nominee was the clear winner. His favorite subject, the Iraq war, was back in the news and he was cheered by some good poll numbers while the Democrats were entangled in damaging story lines.

In many of the weeks since he effectively clinched the nomination on Super Tuesday, McCain has been on the losing side of a battle for headlines. Even last week, according to PEJ’s Campaign Coverage Index, he was a significant or dominant factor in 35% of the campaign stories from April 7-13, trailing both Clinton (56%) and Obama (46%). But that 35% also marked McCain’s highest level of coverage since Feb. 18-24 when the New York Times ran a widely criticized story suggesting an inappropriate relationship between him and a female lobbyist.

Sometimes, moreover, it’s the nature of the coverage rather than the level that counts. Last week, the largest element of campaign coverage involved a subject that McCain has staked his presidential bid on—the Iraq war. Coverage of General David Petraeus’ report to Congress accounted for 14% of all campaign coverage. (This re-focus on the debate over Iraq is one reason why the race for the White House had its lowest week of coverage in 2008.)

Although McCain is in the position of supporting an unpopular war, he fared pretty well in the media’s analysis of how the three candidates handled Petraeus’ presentation. And he was bolstered by a poll that showed the public trusts him more than Clinton or Obama when it comes to handling Iraq, despite that position.

The Arizona Senator also benefited from some media speculation about a vice-presidential running mate that included the name of Secretary of State Condoleezza Rice. That helps remind voters that McCain is the only one of the three presidential contenders certain to be on the November ballot.

Meanwhile, the story lines for McCain’s Democratic rivals illustrated the pitfalls facing two candidates still slugging it out. Clinton had to deal with two negative narratives that consumed much of the week. There was the demotion of chief campaign strategist Mark Penn, after it was revealed he was helping Colombia with a trade agreement that Clinton opposes. And Bill Clinton reignited a dying furor over his wife’s faulty recollection that she had dodged sniper fire during a 1996 trip to Bosnia.

Obama was a beneficiary of those Clinton problems—that is until he generated his own controversy that surfaced with an April 11 Huffington Post report on a fundraiser in San Francisco five days earlier. There Obama said that people in small towns who feel economically disenfranchised “get bitter, they cling to guns or religion or antipathy to people who aren’t like them or anti-immigrant sentiment or anti-trade sentiment as a way to explain their frustrations.”

That statement was quickly criticized as elitist and patronizing by both Clinton and McCain. By the end of the week, the “bitter” remarks had accounted for 8% of all the campaign coverage and Obama was on the defensive. The Democrats seemed to be caught up in a game of gaffe ping-pong, with the media eagerly keeping score. 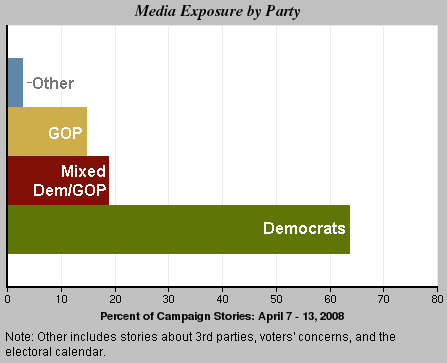 Overall, coverage of the campaign filled 23% of the newshole last week as measured by PEJ’s News Coverage Index for April 7-13. But that was the least amount of coverage for any week this year, falling under the previous low of 27% from March 10-16 when the Eliot Spitzer prostitute scandal galvanized the media. The campaign was the top story in only three media sectors last week—newspapers (where it filled 15% of the newshole), cable news (41%) and radio (33%).

If General Petraeus’ visit to Washington last week gave the presidential candidates a chance to distinguish themselves on Iraq, the media post-mortems pretty much called it a three-way tie. In evaluating the political impact of the Petraeus testimony, CNN’s Candy Crowley declared on April 8 that all the candidates “came away with something” beneficial to their campaigns.

Two days later on MSNBC, Hardball’s Chris Matthews rolled out a survey showing that when asked who they trust on Iraq, the public picked McCain by a 54% to 40% margin over Obama and Clinton. In trying to explain a war-weary public’s embrace of the hawkish McCain, NBC’s Washington Bureau Chief Tim Russert noted that “national security has always been the Achilles’ Heel for Democrats. [Citizens] believe the war was a mistake. They do want to get out. But Americans hate to lose.” On April 11, an AP story posted on AOL.com had more positive poll results for McCain. He had pulled into a tie in a match-up with Obama, erasing what had been a 10-point deficit. 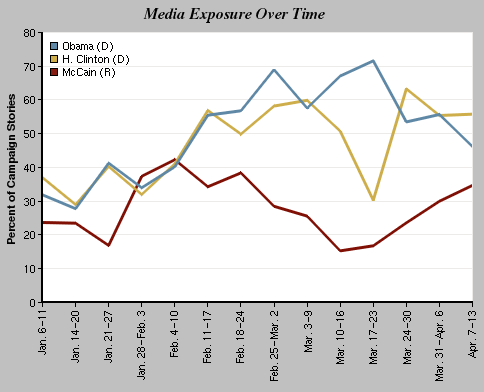 Another poll floated around last week as well. It showed a Republican ticket of McCain and Secretary of State Condoleezza Rice narrowly defeating an Obama/Clinton combo. Even if that contest seemed like an awfully long shot, McCain had to prefer the “veepstakes” chatter on MSNBC to the kind of attention the Democrats were getting.

Clinton began her week trying to dig out from the bad news about Mark Penn, which the April 7 New York Times called “the latest upheaval in a campaign that has seen its manager replaced, faced critical money shortages and has often lagged behind Senator Barack Obama…in a cohesive message and ground strategy.”

The Penn saga accounted for 8% of the week’s campaign stories and a few days later, Clinton had to perform damage control after her husband’s unhelpful remarks about Bosnia. Bill Clinton’s decision to resurrect that Bosnia sniper story with an error-laden defense of his wife helped make him a dominant or significant factor in 10% of last week’s stories.

“The Bill Clinton factor,” declared CBS anchor Harry Smith on the April 11 newscast. “He tries to explain Hillary’s statements about her Bosnia trip, but only makes things worse. Now she tells him to zip it.”

There were several significant news events last week that competed with the campaign for media attention. Thanks to the Petraeus visit to Congress, the Iraq policy debate was the second-biggest story of the week, filling 10% of the newshole as measured by PEJ’s News Coverage Index for April 7-13. That marked the highest level of coverage of the Iraq debate in 2008. (But it’s worth noting that when Petraeus delivered a much-awaited Iraq progress report to Congress on Sept. 10, the Iraq debate coverage filled 36% of the newshole that week.) The Beijing Olympics was next at 9%, with the story driven by the protests centered around the global travels of the Olympic torch. The raid on a polygamist sect compound in Texas was next at 7%, followed by the issue of airline travel (6%) after the cancellation of numerous flights last week for safety inspections.

Extra! Extra! McCain Makes as Much News as Obama

Character and the Primaries of 2008