Until now, CNBC, owned by NBC Universal, has dominated 24-hour cable business news. CNN tried to get in the game in 1995 with CNNfn, but shut the channel down in 2004 after years of struggling. Bloomberg TV, around since 1994, has also never gained the traction to truly compete.

Still, News Corp. CEO Rupert Murdoch argues the potential for Fox here is great. Most analysts on Wall Street seem to agree. In the midst of audience and revenue declines across other news media, CNBC has managed to grow both, a sign of a significant market.

A host of other factors, according to analysts, also suggest this might be a good time to be entering the business TV sector.

First, there are the demographics of the audience. When it comes to advertising dollars, the appeal is as much based on who is watching business news as it is on how many. Both CNBC and Bloomberg TV (on a smaller scale) have demonstrated that advertisers pay top dollar to reach affluent people, even if the numbers are small. Touting the wealth of its viewers, both of the current channels have seen an increase in the number of subscribers and ad revenues. According to projections by Kagan Research, in the last three years, CNBC has seen its subscriber base grow by 9% and net advertising revenues increase by 40%. Bloomberg TV has seen a 62% increase its net ad revenues.1

Census data also suggest the demographics may become even more appealing over the next few years. The median age in the U.S. is rising, swelling the ranks of people who must save and invest for major expenses, including their kids’ education and retirement.

A second plus for business news is that more people than ever are investing in the stock market. According to one expert, more than 50% of U.S. households own stock in the market today compared to 10% in 1970.2

That suggests that more people may pay attention to and be affected by business news, irrespective of market conditions (unlike in 2000, when, following the economic recession, business TV ratings and ad sales took a big hit.)

Third, business news has the big advantage of being Internet friendly. The nature of the ‘product’ – where easy access to data, up-to-the-minute headlines and price changes are critical – is ideal for the Internet.

Finally, business news consumers, more so than audiences for other types of news, put a premium on brand name programming.

As Christopher Poleway, former president of Time Inc. Business and Financial Network told USA Today, “One of the things we’ve learned in our research is that (business news) consumers want to go to only a few trusted sources of information.”3

Here is where things stand among the three key players as the new battle begins.

Cable News at a Glance 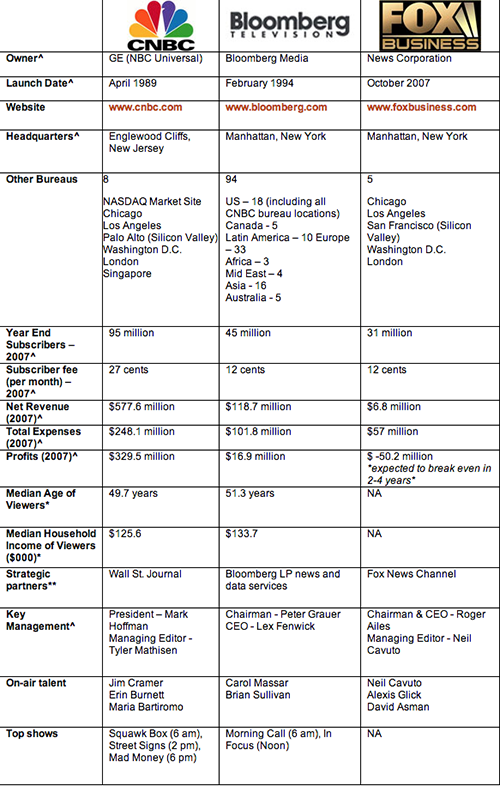 The oldest, and most established, business news channel in the U.S. is NBC Universal’s CNBC. Set up in 1989, it has carved a distinct niche for itself that has translated into both cash and strong brand equity. With guaranteed advertising dollars and subscription fees, the channel is a veritable cash cow for its parent company – according to Kagan Research, it is projected to earn more than $300 million in profit in 2007.

The secret of its success lies in the viewers it attracts.4 The network says that 99% of its viewers own stocks and that eight out of 10 trade more than three times a month. In 2007, Nielsen puts CNBC viewers’ median family income at $63,000, vs. $48,000 for the average cable home.5 A 2006 survey by Mendelsohn Media Research, which only looks at households that earn more than $85,000 or more and includes out-of-home viewers, puts the CNBC viewer’s median income at $126,000 a year.6

According to its President Mark Hoffman, “Wealthy people watch CNBC, and those who want to be wealthy.” “We live in a different place,” he said, calling it the “C-suite,” or the rarefied region that plays well among the CEOs, COOs and CFOs of companies.7

While it has dominated business news on TV, CNBC’s online avatar is more recent. After sharing content with Microsoft’s MSN for years, it finally introduced its own Web site in December 2006. With 662,000 unique users in April, the site ranked a distant 22nd among financial news Web sites, according to comScore Media Metrix.

Critics also point out that it has no original programming to speak of in the weekend or evenings, something it must address if it wants to continue to stay relevant.

Rupert Murdoch officially announced the October launch of his new business channel in February 2007, after almost two years of speculation and rumors. A part of the Fox Television Group, the channel is the responsibility of Roger Ailes, the architect of the Fox News Channel and incidentally, former president of CNBC.

Like any new TV channel, it starts with certain disadvantages. It begins with a much smaller subscriber base than its rivals (one-third that of CNBC and a little less than Bloomberg TV) – though this will probably increase soon. News Corp. officials have said they’ve spent $100 million on the channel’s start-up (much less than what was spent on Fox News, which took four years to catch up to CNN.)

News Corp. has been keeping programming specifics under the wrap up till the launch and few big name personalities have been announced. But given its backing, and News Corp.’s track record with Fox News, the new channel has already acquired a reputation. According to Bear Stearns analyst Spencer Wang the new channel is estimated to be worth about $540 million.8

The channel’s ‘soft launch’ is also seen as a deliberate strategy on News Corp.’s end, something they did with Fox News. As media writers put it, Ailes and his team hope to keep the network low key till it finds its niche.9

The launch follows News Cop.’s acquisition of Dow Jones & Co. (parent of the Wall Street Journal) in August 2007 – and fits in neatly with what is seen as Murdoch’s larger strategy to become a global financial information powerhouse. But the potential synergy may not be fully realized for some years. The Wall Street Journal has a content-sharing agreement with CNBC that runs until 2012, giving the latter has exclusive use of journal reporters as on-air personalities. News Corp. officials are playing down those limits, with top executives noting that the agreement doesn’t extend to other Dow Jones brands and content.

Like its rivals, Fox Business is also gearing up to make its presence felt online. The channel’s website, or ‘microsite’, was used as a tool to preview the channel and went live in the first week of October. If successful, News Corp will be the owner of three premium business news sites, the other two being Dow Jones’ WSJ.com and Marketwatch.com.

What remains to be seen about Fox Business Network is how it will position itself vis-à-vis CNBC, and related to that, how much it will follow in the footsteps of Fox News.

One strategy seems to be reaching out to a broader base. “We’re going to be very different to CNBC,” Murdoch said at the Goldman Sachs Communacopia conference in September 2007. “CNBC is a financial channel for Wall Street. We’re for Main Street. We’re looking for different things, different initiatives, and a different look. You will see very exciting channel.”10 However, CEO Roger Ailes in an October 2007 interview to the Wall Street Journal commented that they are “not gonna reach for a lower financial demographic” that any other business channel.11

The other, but far lesser known, business channel is Bloomberg TV. Run by financial information company Bloomberg L.P., the channel launched in 1994. It not only airs on the company’s core product, the Bloomberg Terminal (this service costs $1,500 a month for a mountain of news and data via special dedicated computers and other media), but relies on it for data during its own news and analysis.

Bloomberg TV does not subscribe to Nielsen, and as such, its viewership can’t be compared to CNBC, but the channel does manage to attract an elite audience. The 2006 Mendelsohn Affluent Survey has found that Bloomberg TV viewers have an average household income of $134,000, the highest of any cable network it measures.12

Publicly, Bloomberg executives say they are staying out of the fight between CNBC and Fox, but analysts believe they are hoping Fox and CNBC will compete for the same viewers, leaving it to serve financial professionals.

Even if not in the fight, the channel has still been making changes for the first time in years. In early October, a new, cleaner look was introduced – getting rid of the jumble of data that surrounded the anchors, keeping only that data which is relevant to the story at hand. It also signed deals with Comcast that have increased the reach of the channel to important financial locations, including New Jersey, South Florida and Washington.13

4. Viewership numbers for CNBC aren’t remarkable. On a given day, it averages only around 218,000, according to Nielsen Media Research, just over one-tenth the number of people who subscribe to The Wall Street Journal every weekday. CNBC argues that its modest audience figures underestimate office and other “out of home” viewing that make up a majority of its high-income audience.

8. “The value could go much higher, though, if an affiliation with the Wall Street Journal brand and reporting capabilities attract additional viewers, cuts operating costs or gives the channel cachet it can use to raise ad prices or negotiate higher fees from cable operators.” David Lieberman, “Media Companies Notice the Sexiness of Business News,” USA Today, August 1, 2007.