For the past 30 years, newspaper industry analyst John Morton and his influential newsletter have been something of an oracle for the world of newsprint – covering where the industry is and where it’s headed. Now, having decided to end the newsletter’s long run, he has ominous words—mixed with a few suggestions—about the future.

“I’m usually a glass half-empty kind of guy,” Morton said in a phone interview with PEJ. “I think the newspaper industry will have a tough next decade – tougher than the previous 10 years. If newspapers keep cutting staff and their news hole, I’m pessimistic.”

“But if they decide they still gather something important to people, something valuable that people want,” he added, “I’m more optimistic.” 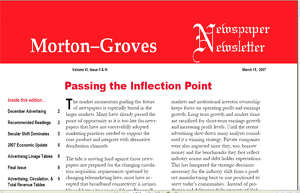 On March 20 Morton and economist Miles Groves, the other half of the Morton-Groves Newspaper Newsletter, announced they would cease publishing their monthly analysis that has long-been a must-read for owners, publishers and investors. Morton says a combination of factors, but particularly a diminishing subscribers base, led him to that decision.

“What we were getting out of it simply wasn’t worth what we were putting into it,” he said, with a chuckle. “We decided the hell with it.”

That doesn’t mean Morton will be abandoning any of his deeply-held views about newspaper publishing. He sees two key missions for the nation’s dailies in the next few years. They need to invest in news gathering to make themselves more vital resources in their communities. And they need to convert more of their operations online as quickly as possible in order to reduce the burdensome costs of newsprint, printing, and delivery.

Morton also offered some context for the economic woes afflicting a business that has witnessed the breakup of some of its major publicly owned chains.

“This is still a profitable industry,” he told PEJ. “Publicly reporting companies last year showed profit margins of almost 18%. There are some industries that can only dream of delivering a profit margin like that.”

Analyzing the health of the newspaper industry has been John Morton’s line of work since 1971. But he’s been involved in the journalism business since 1960, when he began as a general assignment reporter for the Binghamton Press in New York State.

After stints at other papers and a brief foray on the broadcast side, he fell into newspaper industry analysis by happenstance. Morton, who had been working at Washington public television station WETA on its local “Newsroom” program, found himself in need of a job when the station ended the show’s run.

He got a call and a proposition from Lee Dirks, who had become one of the nation’s first newspaper stock analysts in the late-1960s as newspaper companies began trading publicly.

“Lee told me all these companies are going public and no one knows anything about them. Let’s cover them and offer analysis and charge them. I figured I try it for a few months,” Morton said.

Morton stayed on Wall Street for more than 20 years working as a registered representative of several big firms before finally leaving in the mid-90’s to continue his work as an independent analyst – removing the official affiliation his company had with any big brokerage house.

Morton said the stock market’s attitude toward newspapers has changed dramatically since he began his career—and in fact, helped drive him away.

“I left because as time wore on, the people on the street were less interested in an analyst like me,” Morton said. “They didn’t care about what was going to happen five or 10 years down the road. They wanted to know about the next quarter for each company.”

In his role as a newspaper consultant, Morton has also written a regular column for the American Journalism Review since 1981. And he’s become a key source for media reporters covering the economic health of the newspaper industry. One message he has frequently stressed was that the business was producing enviable profit margin despite Wall Street’s lack of enthusiasm.

Still, Morton acknowledged that those current 18% margins are down from about 22% a few years ago and there are problems on the horizon. He is particularly skeptical about whether newspapers will use the move to the Web to broaden their coverage and appeal or as an excuse to shrink their newsroom.

Morton said the online world poses the greatest challenges and offers the best opportunities for the industry.

“It has thrust the growing part of the business into a highly competitive environment,” he said. “The new markets on the Web, things like auctions, can completely avoid ads altogether.”

Morton holds that if newspapers use the Web the right way, it could be of great benefit. “I’ve seen the P and Ls (profit and loss statements) of some news sites. Their margins are up over 50% in some cases,” he said.

There are real savings to be had for newspaper if they can move more and more of their publication online. If an advertiser shifts a dollar of spending in the local paper to only .40 cents online, the math can still work for newspapers, Morton said, but only with reductions in printing and delivery costs.

The key for the industry, he stressed, is how the parent companies handle their online revenues – whether they use them to bump up profit margins or invest in reporting resources.

That’s a situation that Morton will now watch closely from semi-retirement.

“I still have my consulting business, which keeps me busier than I’d like to be,” he said. But at least now I won’t have the distraction of having to produce the newsletter every month.”