President Bush has never been a big fan of press conferences. He held only 17 solo question-and-answer sessions with reporters in his first term (not counting brief joint appearances with visiting heads of state). That was the lowest total of any president in the television age.

The declining standing of the news media may have had something to do with the president’s decision to ignore them. Indeed, first chief of staff Andrew Card once remarked that the White House felt members of the press “don’t represent the public any more than other people do.”

But there seems to have been something of a change of heart in Bush’s second term.

In the 21 months since his second inaugural, Bush has already held 15 solo press conferences. Last year, 2005, he held nine – more than double the number he averaged each of his first four years. In 2006, he’s already held six – including one in each of the last five months. At this rate his second term would not only easily surpass his first-term total but equal it in two years. 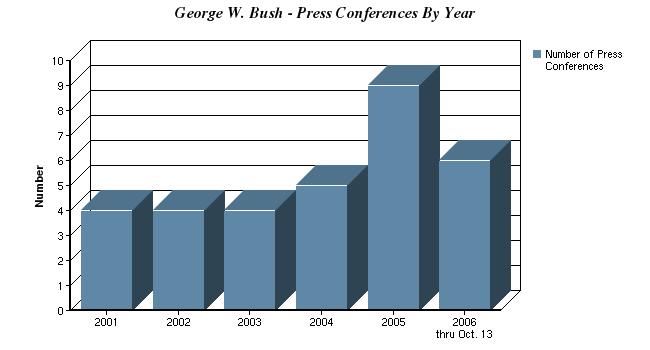 What’s behind the increase? Motive, of course, is difficult to discern, but the record suggests the change isn’t being driven simply by the pace or significance of events. In the four months following the attacks of September 11, 2001, for instance, Bush held only one press conference. In all of 2003, the year the U.S. invaded Iraq, Bush held only four press sessions.

The President’s newfound interest in conversing with reporters may have something to do with the coming mid-term election and a desire to use the bully pulpit to sway the news agenda. But there was no analogous increase before the mid-term elections of 2002.

Partial explanations may be found in the President’s flagging poll numbers and difficult news from Iraq. Yet even then, the President did no press conferences between January and June of 2006, despite tough political fortunes.

Perhaps the fullest explanation is some combination of all these factors, a political year proving more daunting each month, a staff shakeup, problems with foreign policy and Congress, and approval numbers that seem mired near 40%.

Regardless of the reason, even a one-a-month schedule of meeting with the press, which would give Bush a final total of 41 in his second term, would not exactly make the president a press conference champ. George W. Bush’s father, George H.W., held 84 solo press conferences in his first term alone, making him one of the most accessible presidents in modern times.

Then again, the son won re-election.

Obama viewed as more caring than Bush, but no more effective

Obama, Bush and the ‘second-term curse’

Republicans gloomier about U.S. role in the world

Describing Obama, Bush in a word