Journalism, if nothing else, should reflect its time. In the last year, America has been attacked, begun a new kind of war and seen its stock market and business sector spiral into crisis.

Crime coverage actually increased last year. Reporting of national defense went up, while coverage of everything else – even the economy – shrank.

In a survey of 103 local news directors, half now think their industry is on the wrong path. Only a third are confident about the future.

With viewers tuning out but profit demands unyielding, what gets on the air is demonstrably thinner. The average local TV reporter is now asked to produce roughly two stories a day, the highest ever in our five years of research, even though data show such demands drive viewers away. And with the government moving to allow even greater concentration of ownership, what’s thin is likely to get thinner. 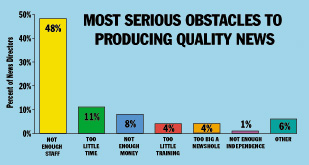 There are signs of hope, according to the Project for Excellence in Journalism’s unprecedented five-year study of local television news, which has now analyzed some 33,000 stories from 50 markets, more than a million pieces of data in all.

While enterprise and investigative work has nearly vanished, what is left is better than it was five years ago.

Most news directors say they want to get back to proven basics, though after thirty years of consultants there is confusion about what those basics are.

Perhaps more fundamentally, the data show more conclusively than ever that viewers actually prefer quality – even the younger viewers advertisers covet. They just don’t see enough of it.

There are also some things that local TV newsrooms can do that are proven to win viewers. They are not costly, but they require commitment.

These are among the findings of the final year of the study of local television by the Project for Excellence in Journalism, a think tank affiliated with the Columbia University Graduate School of Journalism and funded by the Pew Charitable Trusts.

In the stories that follow, the Project offers news directors’ perspective on their industry (Pessimism Rules in TV Newsrooms), evidence of the impact of quality (How Strong Is the Case for Quality?), a breakdown of what practices demonstrably attract viewers (Five Ways to Build Viewership), a sobering look at how local news did not change after September 11th (After 9/11, Has Anything Changed?), a detailed content study of the growing Spanish-language news market (Separate but Equal), a hard look at watchdog journalism in local TV (Investigative Journalism Despite the Odds), and more.

Next: Pessimism Rules in TV Newsrooms
← Prev Page
You are reading page1Page2Page3Page4Page5Page6Page7Page8Page9Page10
Next Page →

Local TV News Project 2002
Pessimism Rules in TV Newsrooms How Strong is the Case for Quality? Five Ways to Build Viewership After 9/11, Has Anything Changed? Separate But Equal: Comparing Local News in English and Spanish Investigative Journalism Despite the Odds Branding Lite Viewers Keep Disappearing Who's Best in 17 Cities? News Director Survey What Is a "Good" Newscast? Methodology