By Laurien Alexandre and Henrik Rehbinder

It's the mid-point of the 6:30 p.m. broadcast, time for the day's financial update on the local news. Co-anchor Eduardo Quezada of LA's KMEX fades into the background as a scroll-down list fills the screen.

The Mexican peso is up, Brazil's real is down, and so is Venezuela's bolivar. From Los Angeles to Miami, one of the nightly features of Spanish-language news is not the Dow but Latin America's currency prices.

The 35.5 million Hispanic people in the United States are the fastest-growing segment of our population, yet local Spanish-language television and the two networks that own most of the stations are largely invisible to the majority of Americans.

What is on Spanish-language TV news and how does it compare with and differ from the English-language variety?

To find answers, this year's local news study examined eight Spanish-language stations in the four largest Hispanic markets: Los Angeles, New York, Miami, and Houston. Two weeks of programs were analyzed – one sweeps, one non-sweeps – during the most popular time slot for news in each market.

In a multicultural media marketplace, Spanish-language local TV news is separate but essentially equal. It demonstrates similar news values and ranks with its English-language competitors in quality.

There are, however, differences, as traditions, resources, and demographic diversity both nurture and constrain news content.

Spanish-language local TV news is more populated by ordinary people, and filled with even more crime and victims, than English-language TV. It is more interested in homelands far away, if not the world in general. It believes immigration is a significant issue. And it is a more one-sided media world.

But it is also not monolithic. While stations differed only slightly by company – Telemundo vs. Univision – they differed rather dramatically by city. 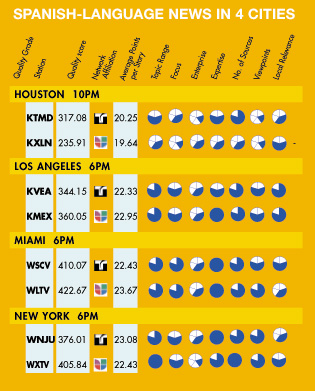 If you calculated a GPA for the two genres, neither would make the dean's list. In the markets where both English-language and Spanish-language stations were evaluated, on average, they all earned "C's."

In their average-ness, the two media worlds were quite comparable. Both the Spanish and English newscasts aired similar numbers of stories and demonstrated a similar – and not particularly impressive – level of enterprise. For both, more than two-thirds of the stories came from pre-arranged events or satellite feeds from elsewhere.

As one gets into details, the distinctions become more pronounced.

One-fifth of Spanish-language stories cited three or more sources (20 percent) compared with only 15 percent in English.

On the other hand, Spanish-language stories were five times more likely than English-language counterparts to have no sources at all, 21 percent to 4 percent.

Spanish-language TV ran more long stories – 25 percent of pieces were two minutes or longer, versus 19 percent in English – but it also tended to tell one side of a story. Three out of ten stories in Spanish presented just one opinion, compared to 20 percent in English. And only one story in ten offered a substantial mix of opinions, half as many as in English.

Nowhere were the differences more apparent than in the treatment of certain topics, especially crime, immigration, and Latin America.

Crime is a mainstay of local TV news in both worlds, but even more so in Spanish. One in three Spanish stories was devoted to crime (34 percent), notably higher than in English (26 percent).

What's more, the protagonists of the crime story are different, depending on the language. In Spanish, the "main actors" were criminals or victims (27 percent), twice as often as in English-language local TV (13 percent).

In English-language news, the main person featured was almost twice as likely to be a lawyer or law enforcement officer, 14 percent, versus 7 percent. And in the Spanish-language version, the cops were often the bad guys.

The two-week sample under review provided an extraordinary number of stories about police abuse: the police beating a Latino in Baytown, Texas, the re-broadcast of footage of an Ohio policeman pummeling an unidentified woman, and a week-long trial of a New York cop found guilty of driving drunk and killing a pregnant Latina mother and her toddler. There was also a Dominican epileptic dying inexplicably at the hands of the NYPD.

Immigration: When Separate Is Not Equal

The two universes were most different when covering immigration. In the Hispanic world, immigrants play an important role in news stories and the community at large – they work and raise families, and their views are solicited.

On English TV news, immigrants don't even have walk-on parts. Less than half of one percent of all stories in the Anglo media were about immigration. By contrast, almost a tenth of Spanish-language stories were tied to immigration issues (9 percent).

Immigration stories also depicted another feature of the Spanish-language TV news: It differs markedly from city to city.

Immigration was a huge story in Los Angeles (16 percent of all stories), less so in Houston (8 percent), but not nearly so important to broadcasters in Miami (5 percent) or New York (5 percent) where the immigrant populations have generally been here longer.

In many stories, immigration was a subplot. For instance, both New York Spanish-language stations ran a multi-day story on a Mexican boy who was killed on city streets by a hit-and-run driver – no doubt a serious crime story. But the grieving father could not accompany his own son's body back home because he was poor and undocumented. This twist of fate turned an everyday crime into a quintessential immigration story.

Focus on South of the Border

Spanish-language TV also has a different approach to covering the rest of the world than English-language news.

Foreign officials and foreign governments were twice as likely to be protagonists in Spanish-language stories (5 percent) than in English-language (2 percent). Most Spanish-language stations in the study aired a regular, in many cases nightly, roundup of Latin American news. In total, 6 percent of their stories were about news from the homelands of immigrants, led by Cuba, then Mexico, Venezuela, and Colombia.

But this highlights another difference. Spanish and English stations carried comparable levels of foreign affairs and defense news (8 percent and 9 percent respectively). But the focus in Spanish was on Latin America. The focus in English was on U.S. foreign policy.

Generally speaking, the two networks, Univision and Telemundo, scored similarly on most indicators of program quality. The more interesting differences were found at the market level. Local Spanish-language news reflected the diversity of its different Spanish-speaking audiences and had a local flavor.

Here, the flavor was Caribbean, and the dominant flavor was decidedly Cuban. One hundred percent of the stories about Cuba in our study aired in Miami.

Both Fidel Castro's mental state and the machinery of the Cuban state were local news. Another distinctly Cuban characteristic was that neither station aired a single soccer score or re-played (in slow motion and from multiple angles) a single gooooooooooal – so common a feature on Spanish- language news elsewhere. (The Cuban game is baseball, not soccer.)

Houston's Hispanic population is dominated by people of Mexican origin and now has a growing and sizable population of Central Americans. The audience is more heterogeneous, significantly poorer and less educated than in Miami. Many are recent immigrants.

In a lackluster media market, the two Spanish stations went from bad to worse. Telemundo turned scarcity to service, however, posting still graphics of job listings in the community. Univision's KXLN, in contrast, turned to crime, using computer-generated street maps to enliven its inordinately high number of crime stories (a staggering 48 percent).

New York's cosmopolitanism showed a Latin flair in its Spanish-language news. For example, the World Trade Center stories on both stations tended to focus on the Hispanic victims of 9/11. Another example was the multi-day coverage of labor strife in a textile factory, exploring its connection to clothes worn by the Colombian music sensation Shakira.

Broadcasting from the nation's financial capital, these were the only Spanish-language stations studied that carried the Dow Jones averages.

Both were solid stations that compared evenly with their English-language rivals.

Univision's WXTV earned high marks for its solid reporting, excellent use of expert sources, and refusal to cave in to sensationalism. It also had fewer crime stories than the average of all stations in the market. Unfortunately, WXTV chose to promote itself unabashedly, three nights posting its network's first-place finish in the most recent Nielsen ratings.

Telemundo's WNJU earned respectable marks and had lots of solid reporting. But it was also the station that had a multi-day exploration into the lives of New York's Puerto Rican strippers that was basically an excuse to broadcast bump-and-grind footage, and it aired a pabulum piece on the female characters of a popular telenovela (soap opera).

The County of Los Angeles has the largest Latino population in the country, and while the numbers of Central and South Americans are vast, the population is still dominated by those of Mexican origin (over 90 percent).

Border stories, like immigration, were big. And fully eight in ten of all Spanish-language stories about Mexico were broadcast by LA stations. Telemundo's flagship KVEA aired a compelling multi-part investigative report on the human side of border crossing.

Telemundo's KVEA, on the other hand, carried a regular Monday night special featuring an astrologer and a psychic pondering current events, in this case, the Pope's eventual demise.

Confirmation that Spanish-language local TV news is as good – and bad – as its English-language counterparts probably shouldn't surprise anyone. But given the ethnic media's influence, and the lack of attention these stations receive from academics and TV critics, the finding is news. Spanish-language TV has things it can teach the rest of the media even as it poses an increasing economic challenge to them.

Laurien Alexandre is Director of the Ph.D. in Leadership and Change program at Antioch University. Henrik Rehbinder is senior writer for La Opinion in Los Angeles, the largest Spanish-language daily newspaper in the country.

Note: "Hispanic" and "Latino" encompass people of many different backgrounds. The 2000 Census put the Hispanic population at 35.5 million, nearly 60 percent of Mexican descent. The next largest single group, Puerto Ricans, are just under 10 percent. Central and South Americans are close to 30 percent, and Cubans and Dominicans account for less than 5 percent each. Of course, the proportions vary by city.

Next: Investigative Journalism Despite the Odds
← Prev Page
Page3Page4Page5You are reading page6Page7Page8Page9Page10Page11Page12Page13
Next Page →

Local TV News Project 2002 Pessimism Rules in TV Newsrooms How Strong is the Case for Quality? Five Ways to Build Viewership After 9/11, Has Anything Changed?
Separate But Equal: Comparing Local News in English and Spanish
Investigative Journalism Despite the Odds Branding Lite Viewers Keep Disappearing Who's Best in 17 Cities? News Director Survey What Is a "Good" Newscast? Methodology