This analysis is based on a survey that was conducted using the NORC AmeriSpeak panel. AmeriSpeak is a nationally representative, probability-based panel of the U.S. household population. Randomly selected U.S. households are sampled with a known, nonzero probability of selection from the NORC National Frame, and then contacted by U.S. mail, telephone and field interviewers (face to face). More details about the NORC AmeriSpeak panel methodology are available here.

This particular survey featured interviews with 1,058 parents who belong to the panel and have a teen ages 13 to 17, as well as interviews with 743 teens. Interviews were conducted online and by telephone from March 7 to April 10, 2018. The survey was conducted by NORC.

Study-specific base sampling weights are derived using a combination of the final panel weight and the probability of selection associated with the sampled panel member. Since not all sampled panel members respond to the survey interview, an adjustment is needed to account for and adjust for survey nonrespondents. This adjustment decreases potential nonresponse bias associated with sampled panel members who did not complete the survey interview for the study. Thus, the nonresponse-adjusted survey weights for the study were adjusted via a raking ratio method to general population totals associated with the following socio-demographic characteristics: age, sex, education, income, race/Hispanic ethnicity and Census Division for the parent respondents, and the following socio-demographic characteristics for the teen respondents: age, sex, race/Hispanic ethnicity, highest level education associated with teen’s parents and Census Division associated with the teen’s household. The weights adjusted to the 2017 March Current Population Survey population totals are the final study weights, which were used to produce the estimates in this report.

Sample sizes and sampling errors for key subgroups are as follows: 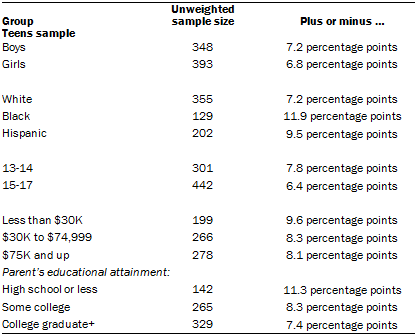