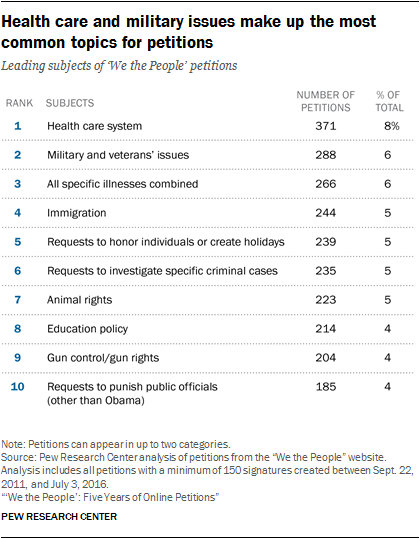 During President Obama’s first full day in office on Jan. 21, 2009, he issued a statement committing his administration to pursue “an unprecedented level of openness in Government.” His goal was to make the federal government more transparent, participatory and collaborative through the use of new technologies.

The broader effort was called the Open Government Initiative, and a key part of it took effect more than two years later when the administration created an online petitioning system called “We the People” in September 2011. The White House promised to use the site to engage with the public and to issue responses to all petitions that reached a given number of signatures within 30 days of creation. The original threshold was set at 5,000 signatures but was increased to 100,000 in later years. As Obama prepares to leave office in early 2017, the site has been active for more than five years and is one of the most prominent legacies of the open government initiative.

In order to understand how citizens used the opportunity to directly seek redress from the White House, and how the administration responded, Pew Research Center conducted a detailed content analysis of “We the People” petitions. The “We the People” archive includes all petitions that received at least 150 signatures within the first 30 days of when they were posted on the site.1 The Center downloaded and examined these petitions covering the period from the site’s 2011 inception through July 3, 2016. The analysis is based on a combination of publicly available data provided by the site’s API and human coding of all 4,799 publicly available petitions and 227 White House responses.

This analysis shows that no one type of request dominated the online petition system, with users of the site instead addressing a wide range of topics. The topmost subjects included petitions pertaining to the health care system (8%); disease awareness and related issues (6%); veterans’ and military issues (6%); immigration (5%); requests to honor individuals or create holidays (5%); requests to investigate criminal cases (5%); and animal rights (5%).

In terms of whether these petitions had any impact, the study suggests there were a variety of outcomes:

Beyond that, it is difficult to calculate the impact of the site, as not all the inner workings of the White House are made public. It is certainly possible that other petitions may have raised awareness about some issues and over the five year time period some petitions drew press coverage to their subjects or petitioners. 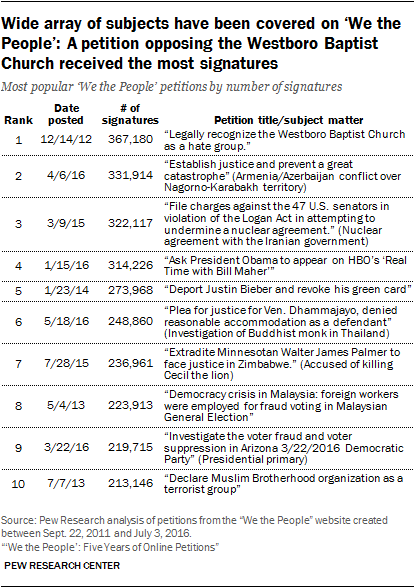 Some other notable trends in the data about “We the People”:

Several of the most popular petitions focused on small groups or international issues that did not necessarily gain much media attention or fall in the purview of the federal government. The single-most popular petition – with 367,180 signatures – was a request to recognize the Westboro Baptist Church as a hate group. Church members regularly picket the burial services for U.S. service personnel and confront people with anti-gay slogans. The second-most popular involved a conflict over disputed territory between Armenia and Azerbaijan.

The first days of the site were among the most active periods in its history. Only one other time period – beginning in late 2012 – featured more activity than the opening days. During the site’s first eight days, users created 174 petitions that received enough attention to be archived. Some 31 petitions created on the site’s first day reached the original signature threshold to receive a White House response, including a request to remove “In God We Trust” from all currency. Throughout the rest of the site’s existence, there were only three calendar months that had more petitions than those first eight days: the three consecutive months starting in November 2012, during which the site averaged 268 petitions per month in the wake of Obama’s reelection.

Requests to honor individuals or investigate criminal cases were common. In total, 239 petitions requested the White House honor a person or create a holiday (5%), while 235 petitions asked to investigate criminal cases (also 5%). Among the most popular requests for holiday commemorations included the Muslim holidays of Eid al-Fitr and Eid al-Adha, the Lunar New Year and Halloween.

Users saw the site as a chance to defend the rights of American citizens. One of the features of the site was that it allowed petition creators to use up to three “tags” (out of a list of about 20 options) to categorize their requests. Nearly half of petitions (48%) were tagged as pertaining to “human rights” or “civil rights” by the authors, far and away the most prevalent labels applied by petitioners. Other common tags included those tied to criminal justice reform (listed on 16% of the petitions), foreign policy (14%), family (12%), health care (12%), economy and jobs (12%), and government reform (12%).

While most of the early responses were written by relatively prominent members of the government, over time, the White House increasingly relied on anonymous authorship. In 2012, 95% of the White House responses had a named author. By 2015, that figure had fallen to 8% – and many official responses were simply credited to the “The ‘We the People’ Team.”

The White House’s response time grew longer during the site’s first two years. However, wait times began to shrink in 2014. For petitions created in 2011 that reached the signature threshold, the average time to receive a White House response was 133 days. By 2013, the average was up to 271 days. In the first half of 2016, however, the average response time was down to 34 days.

Users of the site created a number of petitions focused on off-beat topics not likely to be taken seriously by the White House or the public. Some of the unusual requests included a petition to recognize International Talk Like a Pirate Day and an effort to change the national anthem to the My Little Pony theme song called “Friendship is Magic.”

Next: 1. The background of the ‘We the People’ website
← Prev Page
You are reading page1Page2Page3Page4Page5Page6Page7
Next Page →

‘We the People’: Five Years of Online Petitions
1. The background of the ‘We the People’ website 2. Use of the site over time 3. Most common petition subjects 4. White House responses and policy impact of petitions Acknowledgments Methodology